Why Does My Cat Watch Me Shower? (3 Solid Reasons) 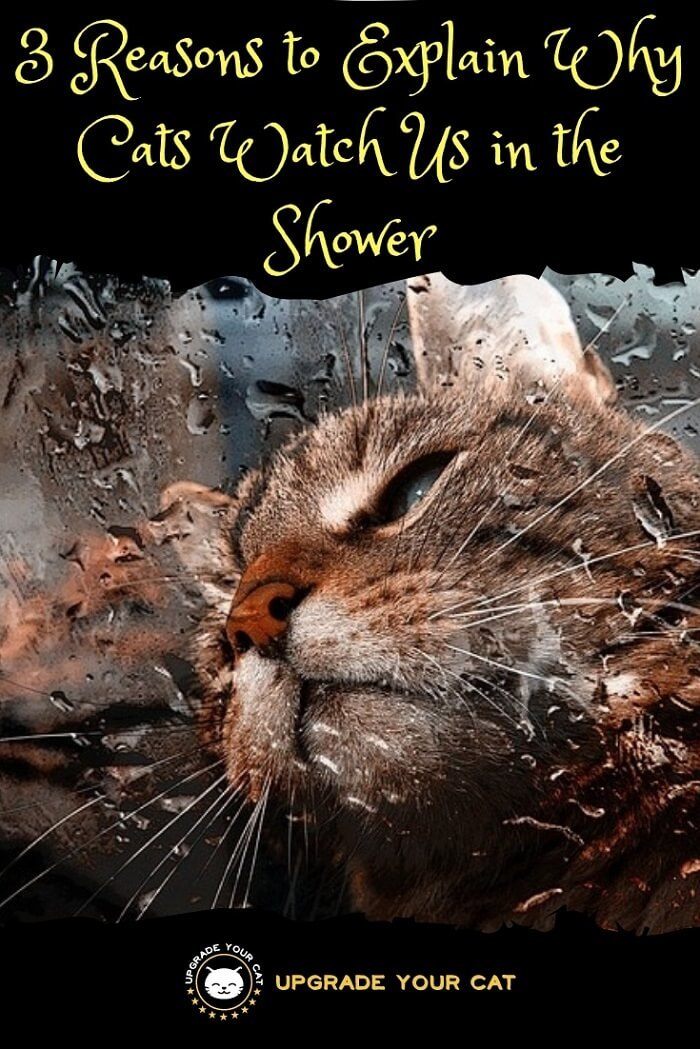 Of all the strange and unnerving behaviors that cats are capable of, catching a glimpse of your cat staring at you while you’re showering is up there as one of the weirdest.

I know it’s happened to me on more than one occasion, and it doesn’t get any less unnerving. Digging around online it’s quite the phenomenon as to why cats watch their owners shower. It’s freaked out a decent amount of people – so we’re not alone here.

I set out on a mission to find out answers to some of these burning questions;

Here’s the best I could come up with:

3 Reasons to Explain Why Cats Watch Us Shower

For those of you who are super paranoid about what your cats are up to when they’re watching you in the shower, the explanation might just be as simple as they are interested in the water.

I know what you’re thinking, cats hate water. When it comes to getting soaking wet, that’s very true. They are, however, generally speaking, pretty obsessed with the sounds, feel, and taste of running water.

So, chances are they’re not plotting to kill you or do anything else nefarious. They’ve barely even noticed you’re there, it’s the water fountain show they’re there for.

When I ran this possible explanation past a friend he was like, ‘Aaaahhhhhhh, now I get it!’

His cat would literally sit with her face almost touching the glass of the shower door every morning and it was completely freaking him out. I know what you’re thinking, why didn’t you close the bathroom door?

Like a lot of people (me included) he tried this but his cat scratched at the carpet under the door and started to shred bits off. This is literally my main pet peeve about my cats, damaging my carpets. So, I no longer lock them out of rooms either.

Anyway, back on topic, the reason why my friend’s cats was staring at him with those big piercing eyes while he was trying to shower with simply because she was hungry. I can’t imagine anyone here will disagree that cats and motivated by their tummies.

If nipping downstairs in your pajamas and putting some breakfast out before having a shower is going to put a stop to them stalking you in the bathroom. I’d say that’s a pretty fair trade-off.

This Is Your Cat Reminding You That They Love You

If I were to strictly look for a positive here I’d say that your cat is in the bathroom with you staring at you because they love you.

This will come as a small consolation for those to you though weirded out by this behavior. But cats do loads of things to show us that they love us that don’t align with what we do. They are, after all, cats not humans.

Ways to Stop Your Cat from Watching You While You Shower

I’ve indirectly covered the main two ways you can stop them from doing this while talking about the reasons why they’re watching you. This is because, as a golden rule, by better understanding our cat’s behaviors we can find better solutions.

So, first of all, I would see if putting out some fresh food is enough to distract them while you’re having a shower. Hunger might be the only reason they’re in the bathroom anyway so it’s worth trying.

Shut Them out the Bathroom

This is the most obvious solution, but not always the easiest to implement. Like I mentioned above, I don’t shut my cats out of rooms because they just end up scratching at the door, jumping at the handles, and ripping at the carpets.

I’d rather allow them in the room and put up with them staring at me or following me around than dealing with the damage they can cause in a matter of minutes with their razor-sharp claws.

So, it’s worth giving it a try. Maybe you will need to find a way to stop them from doing any damage. But maybe it will just work.

Maybe it’s time to start outsmarting them. Cats are creatures of habit, and although we have to adhere to certain routines to, you could try mixing up the times you shower. Start catching them unawares, sneak in that shower while they are sleeping, eating, or out patrolling the neighborhood.

It’s time to turn the tables on them. You’ve been stalked, bullied, and watched for way too long.

Cats have loads of wonderfully interesting and curious behaviors. Unfortunately, for most people, this isn’t one of them. Having your kitty staring at you while you in the shower is just plain annoying.

With that said, hopefully, I provided you with enough information to understand why your cat is doing this and how to stop them the future.

This is been one of the more light-hearted topics around cat behaviors that I’ve covered. But to me, it’s no less interesting than some of the other things I’ve talked about. I just hope I’ve helped some of you reading this either come to terms with or deal with this problem.