Why Does My Cat Sleep with His Eyes Open? (Don’t Worry) 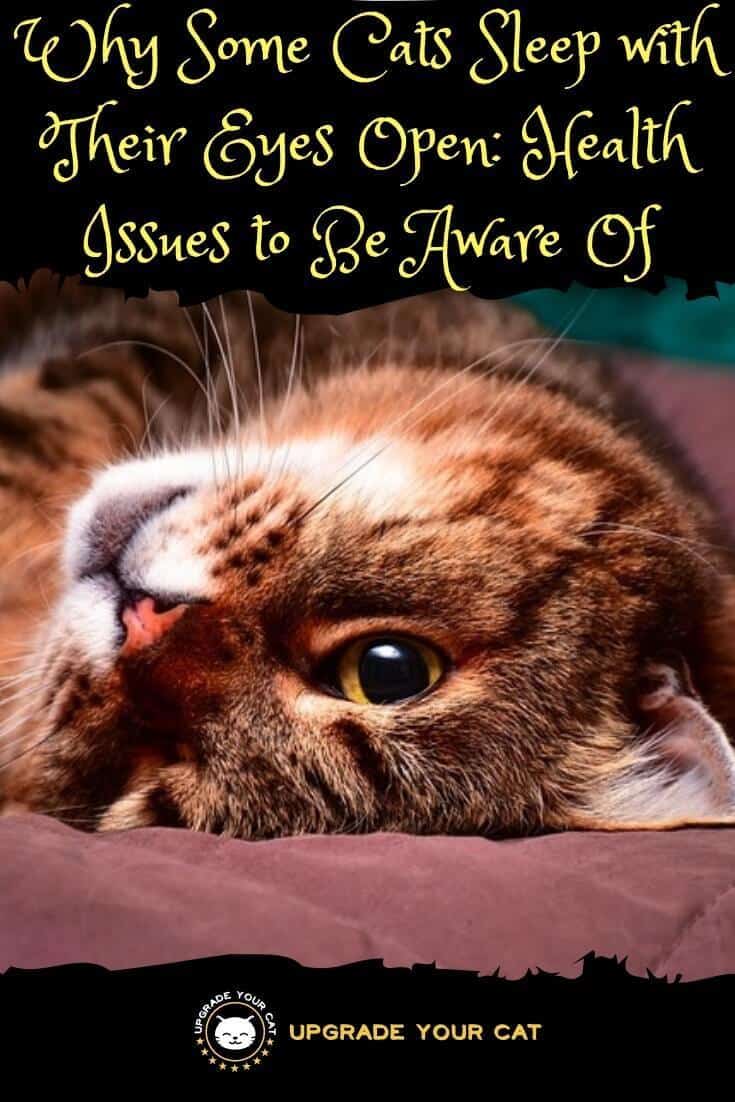 The first time I saw my cat sleeping with his eyes open it freaked me out. it was only recently when a friend of mine told me that he saw his cat crashed out, fast asleep on his side, with his eyes wide open and a glazed over stare that it reminded me of this.

I haven’t actually seen it for a while but one of my cats used to regularly sleep with his eyes open. Or, sometimes he would only have one of his eyes open which is even weirder.

The first couple of times I waved my hand in front of his face to see if he was just staring into space. When I got absolutely no reaction I touched him to make sure he was ok!

He jumped awake and lifted his head suddenly as if to say, ‘Why have you woken me from a perfectly good sleep? This better be good.”

Well, I didn’t have a good reason. Other than I thought, well, I thought he might be dead, to be honest. I think I’ve watched too many movies when dead people have their eyes open….

Anyway, I need to know if this is normal behavior and if there is anything I needed to worry about. Here’s everything I’ve been able to find out about why some cats sleep with their eyes open, and if you have anything to worry about.

Does Sleeping with Eyes Open Mean My Cat Is Sick?

My first concern the first time I saw my cat sleeping with his eyes open was that he was sick.  Fortunately, this wasn’t the case for my cat. Seeing a cat sleeping with their eyes open doesn’t mean they are sick, although it might be something you need to rule out.

It was fairly obvious to me that there is absolutely nothing wrong with my cat. I kept a close eye on him obviously for the next few days, and he did sleep with his eyes open a few more times over the coming months.

The next time I was at my vet’s picking up his prescription flea treatment I mentioned it to my vet. He reassured me that there was absolutely nothing to worry about and it’s actually quite normal for cats to sleep with their eyes open on occasion.

He pointed out that around 10% of the human population sleep with their eyes open, which came as a shock to me. Researching this online he’s spot on too.

While he didn’t have a specific reason why my cat, or any cats that matter would sleep with their eyes open, he told me not to worry about it.

Is It Bad for a Cat to Sleep with Their Eyes Open?

The only real downside to cats sleeping with eyes open, apart from the obvious of freaking you out when you see it, is that they may dry out their eyes.

This is the main issue for humans that sleep with eyes open. Eyedrops are usually a simple cure for this. Obviously, it isn’t as straightforward as this with a cat, so I would suggest that you just keep an eye on their eyes for any signs of redness or irritation if they’re sleeping with their eyes open on a regular basis.

Another site that will give you quite the shock first time you see it is seeing a cat’s third eyelid closed but not their outer eyelid while they are sleeping.

For those who were not aware of this, cats actually have two sets of eyelids. They have their outer eyelid that we can see, this is covered in fur and looks normal for want of a better word.

Then they have what’s called their ‘third eyelid’. Which is white or grey in color and looks more like a layer of film that retracts more horizontally than up to down like normal eyelids.

Cats have third eyelids as an extra layer of defense against being scratched by other cats and predators. It also helps keep the surface of their eye moist and clear of dirt debris.

Generally speaking, seeing a third eyelid showing is usually a sign that there is some sort of underlying health issue. Not so much when a cat is sleeping, if that’s the only time you’re noticing it. but it might be worth getting it checked out by your vet.

Here is a video showing you exactly what I mean:

Seeing a cat laying down with their eyes wide open and then realizing they’re fast asleep quite a shock at first. But once you get past this initial shock and get used to this little quirk your cat has, there shouldn’t be anything to worry about.

We can chalk this one up to just one of those cat things. Much like sleeping in a particularly annoying place or position, having a taste for weird foods, or any number of strange habits and behaviors we as cat owners have to get used to.