Why Do Cats Insist on Being in the Bathroom with You? 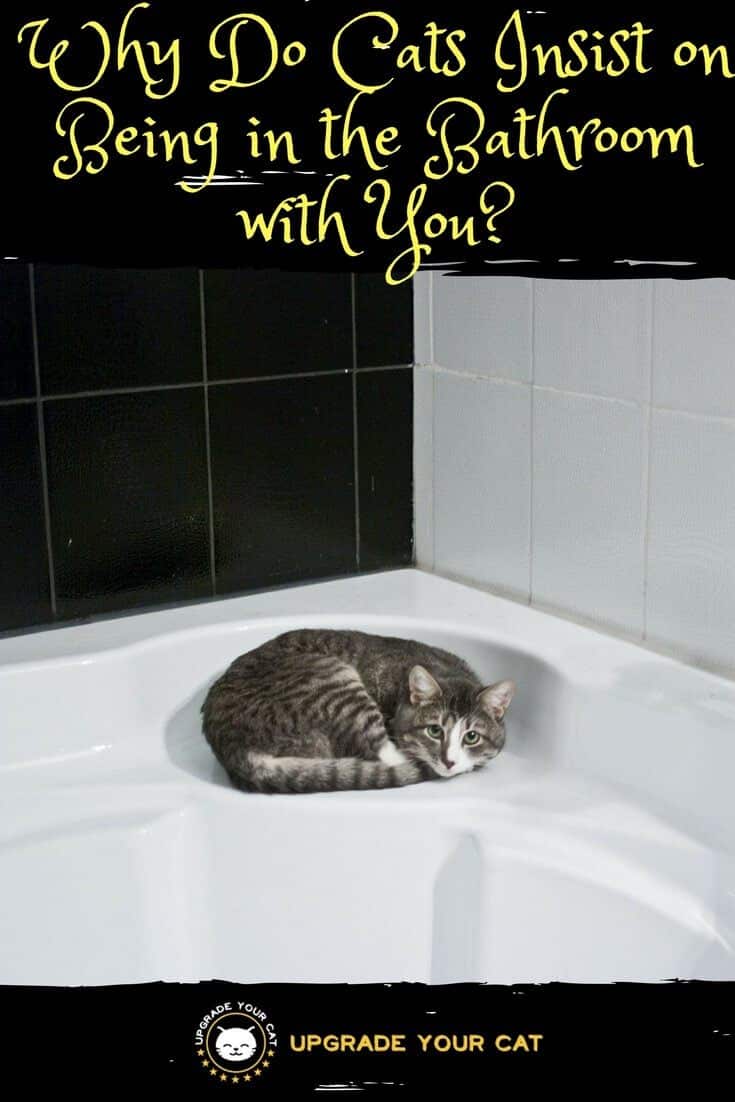 If you’re wondering – why do cats insist on being in the bathroom with you? – I can help provide some insight into this behavior.

It just so happens to be one of the many curious and strange behaviors both of my cats do at times. If you’ve landed here, I guess your cat follows you into the bathroom too, right?

While we’re on topic and sharing bathroom-talk, we might as well get it all out on the table. Here are some of the other bathroom-related things my cats do. Does any of these sound familiar? :

Basically all the kinds of things that would get a stranger arrested, or a friend in some serious trouble. Yet, because it’s our furry little friends we either find it acceptable or don’t really mind.

But you’re right to explore these behaviors. We should always be taking steps to better understand our cats. Plus, we all know that our cats are plotting something …. so we might as well try and get one step ahead of them, even if we can’t.

Here are some reasons to help explain we cats try to insist on being in the bathroom while you’re in there:

4 Reasons Why Your Cat Follows You into the Bathroom

Cats Love Water (Just Not Swimming in It)

If you’ve ever tried to bathe your cat you would think it’s a form of torture trying to get your cat wet. Yet they love running water and are attracted to the sounds and visuals of water and most cats can’t help playing with it or having a taste.

Once they tie together that you going to the bathroom means there is a good chance they will get to see water without getting wet, they are going to follow you into the bathroom.

Cats Drink from the Toilet (I Know, It’s Disgusting)

Cats drink from toilets (here’s more details as to why). Almost all cats do it, whether or not you catch them in the act, you can be pretty sure it’s happening. Gross, I know.

If you keep the toilet seat down when not in use they will pick up on this and stalk an opportunity to get their heads in when it’s open.

This may be the reason or one of the reasons why your cat follows you into the bathroom. It’s the combination of fresh water flushing into the pan; the sound, the scent, and the allure of having a taste.

The best thing you can do is keep putting that lid down after you’ve finished. It’s not the most desirable of habits, is it.

Cats Follow Us Everywhere (We Just Notice the Bathroom More)

If you think about it, doesn’t your cat follow you into other rooms as well? I bet they do. We just notice it more when it’s the bathroom because a bathroom is usually a private place and it’s somewhere we have time to reflect and think about what’s going on in there with us.

If you’re not used to having your cat shadowing you, it’s about time you got used to it. Because cats go where they want when they want, and it’s going to continue to happen.

Those big eyes and that piercing stare without blinking can be a bit distracting when you’re on the toilet. But shut them out at your peril as they scratch and claw at the door to get in. Pick your poison.

Your Cat Wants Attention – Give in to It

Cats often seem to find the worst times to play with us. Such as pawing at our faces while we’re sleeping, and of course when we need to use the bathroom.

But when they want some fussing that can be pretty relentless. If your cat is circling your legs and following you around they likely want some attention. Better give in and give your kitty some fussing!

Why Does My Cat Sleep in the Bathroom?

If only we could control where cats sleep, right? Mine tend to pick the most annoying places; like on the stairs, on my clean clothes, or on my pillow (often while I’m using it).

If you’re trying to figure out why your cat is sleeping in your bathroom consider some of the following possible reasons:

Cats will choose somewhere that is comfortable, safe, and quiet (generally speaking). It’s going to be a combination of these reasons why they are sleeping where they are.

Unless of course, your cat is just odd. Which happens a lot. I’ve seen cats sleeping in the most uncomfortable positions that can’t be explained.

Here are some other FAQ’s to try and help explain some of the other bathroom-related behaviors your cat might be guilty of.

Why Do Cats Wait Outside the Bathroom?

This is a really easy one to answer.

Because you didn’t let them in the bathroom with you. Accurate?

If you leave the door open and they are still choosing to patiently wait outside there are some other possible reasons. I don’t want to know the answer to this, but maybe you should consider if it’s too smelly for them to be in the room? 🙂

If they are just laying around outside it’s likely just due to them wanting to be near you and settling down there for a while. I don’t think we need to suspect them of conspiring anything.

Why Do Cats Watch You Poop?

What they are doing is likely trying to get your attention for some reason (source). High on a cat’s list of priorities is eating. Next is playing or fussing, being let out, or, let’s be completely honest, it may be that they are trying to annoy you. Because cats do that.

Why Does My Cat Sit on Me When I’m on the Toilet?

We have to remember that cats don’t actually know what a toilet is and what we’re doing sitting on one. To us, they just see us sitting down and see an opportunity to jump on our laps.

If they are in the mood for some lap fussing, they are going to try and sit on your lap regardless of what you’re doing.

Why Does My Cat Watch Me Shower?

This is a phenomenon that I’ve seen loads of people talking about online and has even come up in conversation with friends. So, it appears that it’s either more popular an occurrence that people give it credit for, or it’s annoying enough for people to discuss.

There are a few reasons that might explain why your cat watches you shower. As I pointed out above, most cats have a fascination with water, even though they will not get wet.

So they are probably enjoying watching the water raining down and splashing about from a safe distance. Another reason is that they want to be able to see and be near you. Or, it could just be that you shower in the morning when its feeding time. You can never rule out food as a motivation for any cat behaviors!

What they are not doing is ‘watching you shower’. They have no concept of what you’re doing, so try not to be weirded out by it is my best advice.