Why Do Cats Roll in Dirt? (5 Reasons to Explain This Madness) 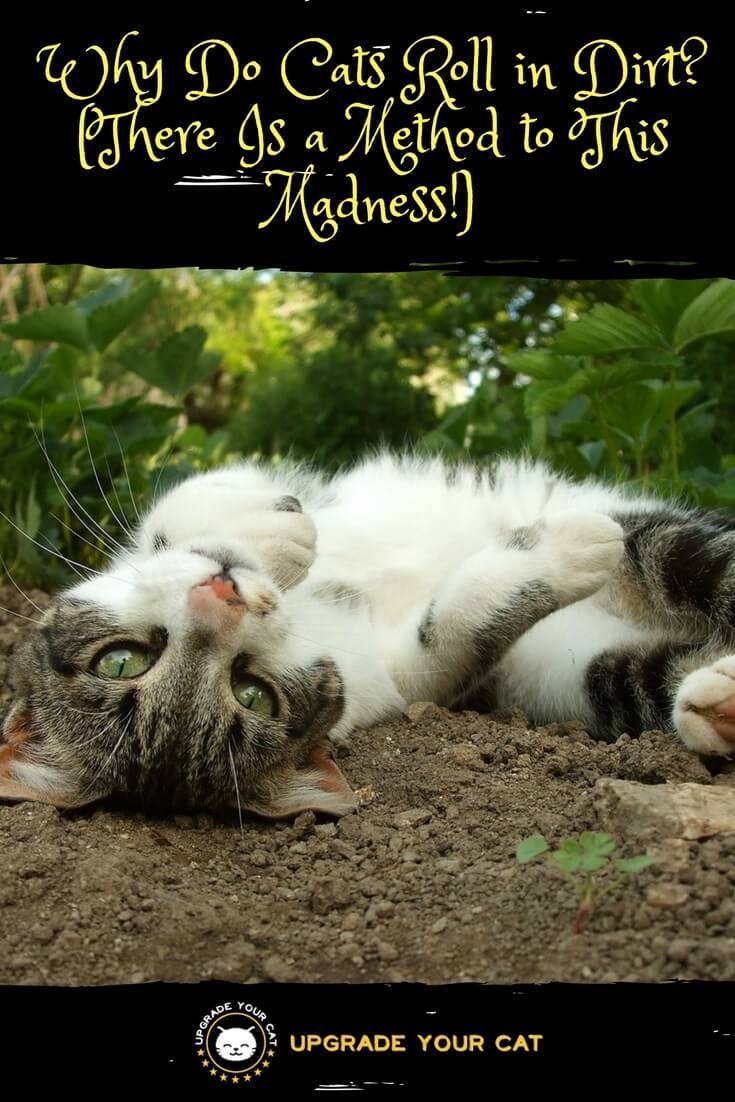 Of all the strange habits and behaviors cats have, rolling in the dirt is one of the stranger ones.

While I can agree it looks fun, it can’t be fun for them cleaning all that dirt off with their tongues. Neither is it for us cleaning them up.

My Maine Coon gets his fur into a right mess rolling around in the dirt in the summer. As you probably know, Maine Coons are long fur breeds so it can take days to get all the dirt out even with my brushing him for an hour or so.

So, why do cats roll in dirt, and why can’t they help this behavior?

The proper name for this behavior is ‘dust bathing.’

Which makes sense when you watch your cat rolling around in the dirt, it looks like they are bathing.

Albeit in mud and dirt instead of clean water, but that’s cats for you!

There are a few reasons that explain why cats like to roll around in the dirt, these are:

It Helps Cool Them Down

It’s no coincidence that cats dust bathe more in the dry dirt when it’s hot. By rolling around in the dirt they take the top layer off and find cooler dirt to roll in.

They also generate a cool breeze by flipping around, although it is a little counter-intuitive as they are burning energy, but it works for them.

Sometimes They Just Have an Itch

We all have an itch that needs scratching sometimes and you know how annoying it can be if it’s in a place you can’t reach.

Well, cats also get itches in places they find hard to reach. You may have seen bears rubbing their backs on the bark of a tree, well, cats rub their backs by rolling around in the dirt.

They Are Marking the Area with Their Scent

Cats mark their territories with their scent to warn off other cats and let them know they have been there.

They do this by peeing on things, rubbing their faces and bodies on objects, and rolling around on the floor.

It’s a Way They Clean Themselves (Yep, by Getting Dirty)

A lot of small rodents take dust baths to keep their fur and coats clean. Rolling in the dirt helps to absorb oils and remove other dirt and debris stuck in their fur.

I’ve spoken to some people who think this is also a reason why cats roll in the dirt. It may also be to remove smells and so on.

From our standpoint rolling around in dirt doesn’t look like fun. Well, not to must of us. But for cats in a playful mood, it’s fun, and this is a reason why some cats to it I’m sure.

If you catch your cat dust bathing go over and play with them. My cat is always in a really playful mood when he’s rolling.

Just in case you wanted to see a cat happily rolling in dirt, here is a video:

Why Do Cats Roll on the Floor Indoors?

Some cats roll around a lot on the floor inside just as much, or more than they do outside. Don’t be alarmed, there is nothing odd about this behavior and it can be explained just as well too.

Most of the same reasons apply as explained above. Except for the reason of cleaning themselves.

More often than not cats roll around on the floor indoors to keep their scent fresh and their territory clearly marked up for themselves.

I’m sure you will have observed a few examples of your cat marking their territory around the home, even if you’ve not been paying attention.

Such as rubbing their mouths or teeth on the corner of tables (laptop when I’m working), and other furniture.

Why Do Cats Roll Around When They See You?

Something that always makes me smile is when my cats roll around when they see me. For my cats, this typically means they want some attention and fussing.

My big Maine Coon wants his tummy rubbed and to be brushed when he’s doing this, and my tabby just seems to want to compete with him for attention.

It’s a typical attention seeking action. Unless they happen to have an itch at the same time of course!

Should You Let Your Cat Roll in the Dirt?

Taking into account all of the above reasons for cats rolling in the dirt, and seeing as it’s a natural behavior, it’s something you have to allow them to do.

I know how frustrating it is when they track mud and dirt through the house (I have a fluffy Maine Coon remember), but it’s just one of the quirks to owning a cat.

It’s not something you can really discourage or stop. So, hopefully, now you better understand why cats roll in the dirt you’ll be a little less annoyed when they are trekking that dirt across your nice clean carpet!