Why Does My Cat Paw at the Window? (5 Reasons) 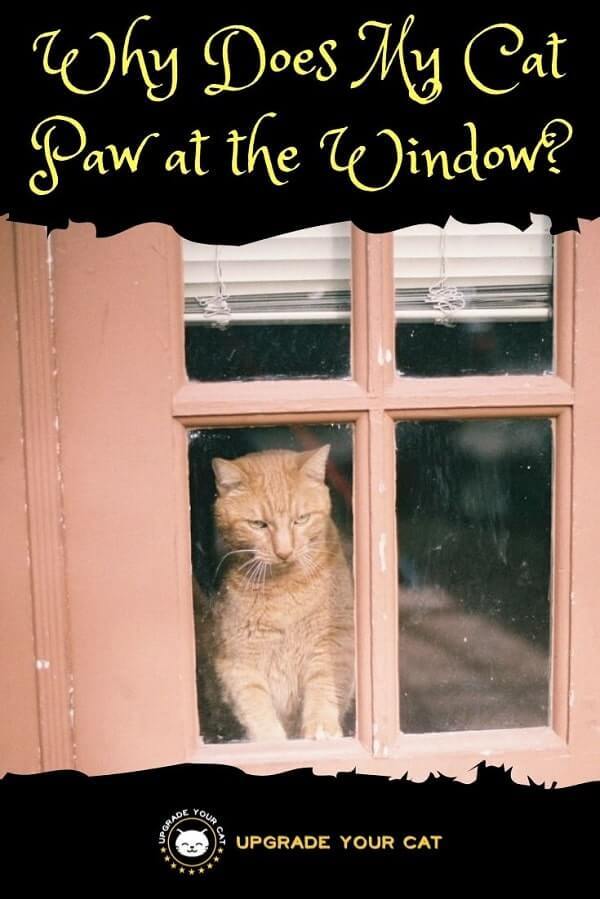 Of all the annoying and curious behaviors cats have, pawing at a window is one that a lot of owners are keen to stop.

Let’s be honest, no one wants their nice clean window smudged up by a grubby cat paw. Nor do we want that high-pitched sound of a cat paw pad screeching on the glass.

So, why exactly do cats paw at windows? It’s not just windows too, cats seem to like rubbing and scratching most glass surfaces, don’t they?

Read on for the main reasons behind this behavior. Plus, some tips to help you stop your cat scratching at your windows:

Why Does My Cat Paw at the Window? 5 Explanations for This Behavior

They Either Want to Be Let in or Let Out

I had a cat that would paw at a window to let me know she needed to come in. She would literally keep on doing it till I let her in too.

I’d be able to hear her in the middle of the night if she wasn’t in, too. I’d have to get out of bed as the noise was so annoying. So, believe me when I say I sympathize if you’re in the same situation.

Oddly, she wouldn’t do the same thing to be let out too. She used to stand by the front door and meow, how polite.

They Are Being Tormented by Birds

Does your cat make a chatting noise when they’re looking out of the window? This is a natural response to seeing birds and other prey while knowing they can’t get at them.

Some cats will also take to pawing at the window. It’s a feline thing, they know they can’t get out and get at the prey, but they’re sure as heck going to act like they want to break free and get ‘em.

Related – Check out these window perches for cats. Let them see the outside world while relaxing!

Cats do a number of “odd” things because they feel soothing or come instinctively to them. Such as kneading blankets, rubbing their paws by their food bowls, pawing on glass, etc.

For some cats, it’s a response to feeling stressed or anxious. If you’ve moved recently or they’ve experienced some trauma, it might be a short-lived thing.

They Are Leaving Their Scent

They do this to continually mark up areas as “theirs” to ward off other cats. Obviously, there aren’t often other cats entering the home. But it’s something they instinctively do, and they also do this outdoors too.

They Are Trying to Get Your Attention

Cats also exhibit certain behaviors to get our attention. If it works, they’ll also repeat these behaviors. Especially if they associate them with getting their desired result.

You may have done something as simple as feeding your cat after they scratched a window before without even realizing it.

Your kitty will then think that scratching a window means being fed, and we all know how much cats enjoy eating.

This can also be tied into the first point I made about being let out or let in after scratching a window.

If you do let them in or out, they’ll return to doing it again next time they want the same response.

This is why when you want to change a cat’s behavior, you have to break the habit by showing them they don’t get the result they want.

How Do I Stop My Cat From Scratching the Window?

Understanding your cat’s behavior is one thing, doing something about it is another.

Despite what you may have heard or been told, cats really are not that hard to train or change some of their behaviors.

It does take a little more work than simply shouting “no” though.

Here are some things to try that should help you put a stop to that nail-on-glass screeching sound:

Use a scent they don’t like – I’ve covered various scents cats hate before. It’s not always a guarantee, and you’ll need to find a scent that your cat doesn’t like – but it’s one of the best ways to stop a cat frequenting a certain area.

Related – Do orange peels stop cats peeing where you don’t want them to?

Place some foil where they stand/sit – It’s no secret that cats do not like the feel or sound of aluminum foil. Laying a sheet at the base of the window they paw at will stop most cats.

Block their access – This isn’t ideal and it’s not a long-term solution, but blocking their access to the window will put a stop to this behavior. You can remove the obstacle after a few days/weeks to see if they return to doing it.

Put sticky tape on the window – Cats do not like the feeling of sticky surfaces. If you put a strip of sticky tape where they paw at, it’ll remove the sensation and sound and deter them.

In this article, I’ve covered five of the most common reasons why cats paw at windows or glass, and some solutions to help you stop them from doing it.

As I discussed, I’ve had a couple of cats that would rub my windows and make that annoying scratching noise.

It really wasn’t that hard to stop them from doing it though. And getting a better night’s sleep was more than worth it!

If you want to stop your cat from doing this, with a little patience and trying some of the points I covered above you’ll be able to put a stop to them I’m sure.

If you want to share your experience on this topic or any other interesting cat-related behaviors, please drop a comment below for the rest of the community.