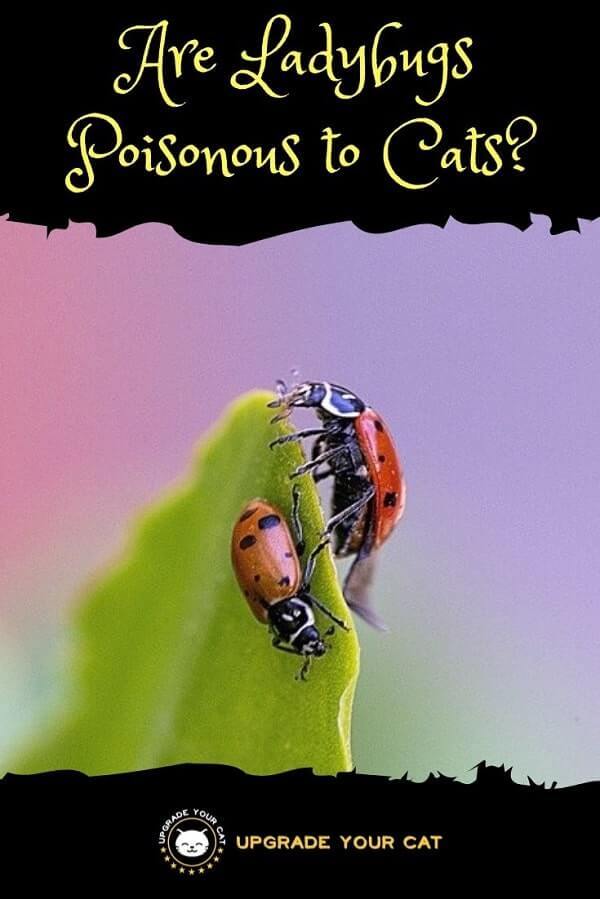 I always know summertime is underway when I start spotting ladybugs, or ladybirds as they’re also called around the garden.

As a cat owner, and a curious cat at that, it raises the question – are ladybugs poisonous to cats?

The answer to this question is, “No” ladybugs are not poisonous to cats.

But, ladybugs do have some defensive mechanisms to help protect them against predators. They’re able to excrete a small amount of their blood, which smells awful, and this can cause some irritation to small pets.

This is very similar to what a lot of beetles do to defend themselves. Ladybugs are a species of beetle, albeit a much more welcome one for the most part.

If you have ladybirds in and around your home, you’re right to be a little cautious for your feline. Here’s everything you need to know about ladybugs and the potential threats they pose.

How Many Different Species of Ladybug Are There?

First of all, it’s important to note that there are loads of different species of ladybugs, and they vary in how much toxicity they possess.

In fact, according to National Geographic, there are more than 5,000 different species of ladybugs! With more than 300 being spotted all over North America.

They’re pretty distinctive looking bugs, and usually easy to spot. The red ladybug with black spots is the most common, and these are the ones always depicted in the media. Farmers and gardeners love them, they feed on a lot of insects and pests that feed on crops and plants.

There are actually a lot of different color ladybugs, they aren’t all red. There are yellow, orange, brown, black, pink, and a lot of shades in-between. The red and orange are the most toxic, which is normal in nature as these are “warning colors” for insects.

If you’re wondering about how many spots ladybugs have and what these mean (I know I was), this varies a lot too. The most common numbers of spots are 2, 7, 9, and 13.

Some ladybirds are even named after the number of spots they have, such as the 2-Spot ladybug, which is red, and the 14-Spot ladybug which is yellow.

Which Species/Colors of Ladybugs Are Toxic or Harmful to Cats?

As I already mentioned, ladybugs are not very toxic. But they do release a smelly yellow fluid to deter predators. If your cat licks or eats this fluid, not only will it not taste very nice but they may experience some mild side effects.

A study was published in the Scientific Reports on Nature.com looking into several species of ladybugs and how toxic they are.

They tested five different ladybugs, and rated them in the following order from most toxic (orange) to least toxic (brown) as follows:

Obviously, this still doesn’t explain the threat level they pose to pets. But interestingly, the orange and red ladybirds are two of the most common species in America. In my opinion, it’s best to try and avoid your cat coming into contact with them just to be on the safe side.

Will a Cat Get Sick from Eating a Ladybug?

It’s possible a cat can get sick from eating a ladybug, especially if they’re releasing their defensive yellow substance. There’s also the risk that the bug is carrying parasites, so it’s really not a good idea for your kitty.

Here are some of the things you can expect if your cat eats a ladybug:

Eating bugs of any kind isn’t exactly ideal. Bugs with hard shells or exoskeletons, such as beetles like ladybugs can irritate a cat’s digestive tract. Especially if they are secreting fluid as they’re being eaten. (Here’s how to interpret some gurgling sounds from your cat’s stomach.)

What follows gastrointestinal upset is usually vomiting or diarrhea, or both. Seeing a kitty throwing up is never pleasant, but in this instance, it’s for the best. Let’s just hope they do it outside somewhere it’s easy to clean up.

An upset tummy usually leads to a loss of appetite. If you can encourage your cat to drink more after eating a bug or two, this will help.

With ladybugs being mildly toxic there’s not a lot to worry about. If symptoms persist for more than 24 hours or your cat is clearly in discomfort or distress, you should seek the advice of a vet.

Does your cat like chasing and eating bugs in the garden? Check out:

Are stink bugs poisonous to cats?

Are centipedes poisonous to cats?

Are Red Ladybugs Poisonous to Cats?

Red ladybugs are the most common color of the bug for most of us.

They pose almost no threat to cats as I’ve explained. But they are capable of secreting a smelly fluid to try and warn cats and other predators away.

Your cat might get a little sick from eating one as I explained above. Hopefully, it’s just mild discomfort and they learn their lesson for next time.

Are Orange Ladybugs Poisonous to Cats?

According to a toxicity test published in the Scientific Reports section of Nature.com (see above), orange ladybirds were rated as the most toxic of all the colors they tested.

You can find orange ladybugs across most of the northern hemisphere, it’s worth checking if they’re known to be in your area. If they are, I know it’s hard to avoid your cat coming into contact with them.

Even though they were found to be the most “toxic”, they still pose a small threat. You’re aware of what might happen if your cat eats one now.

Are Yellow Ladybugs Poisonous to Cats?

Bright colors like yellow are usually a warning sign to predators in the wild that they will regret eating them.

Yellow ladybugs are bluffing a little, they rated low on the toxicity scale. Which is good to know as I see quite a few ladybugs that are different shades of yellow in the summer.

Are Black Ladybugs Poisonous to Cats?

Despite looking quite menacing, especially the black bugs with red spots – black ladybugs are not poisonous to cats.

They have only mild toxins as a defense from being eaten, and as I’ve discussed already this fluid will mildly irritate a cat.

No need for a great deal of concern if you have spotted black ladybugs in your garden. It’s cool if you have them, I’ve never seen one before.

The Difference Between Asian Lady Beetles and Ladybugs?

This was an area of confusion for me before I researched this article. So, hopefully, I can help clear this up for you too.

I always thought Asian Lady Beetles was another name for ladybugs. Both are part of the beetle family, both have “Lady” in the name, they look the same in pictures, someone had told me they were the same. …

A lot of reasons why I thought they were the same!

However, Pestwiki points out that they are not the same things. there are a few differences that separate Asian Beetles and ladybugs.

First of all, they are both from the same family known as Coccinellidae. But you can tell Asian Beetles – which are also called ladybirds – apart from ladybugs by looking for the following differences:

In Summary – Ladybugs Are Not Poisonous to Cats

Hopefully, this article has helped educate you about the different colors and types of ladybugs, as well as reassure you that they post very little danger to your feline.

Cats can get sick from eating ladybirds, just as they can from most insects and bugs. But not because they are poisonous.

Moreso it’s due to the fact that eating hard bugs can cause gastrointestinal issues and they can excrete a mildly toxic substance as a defense.