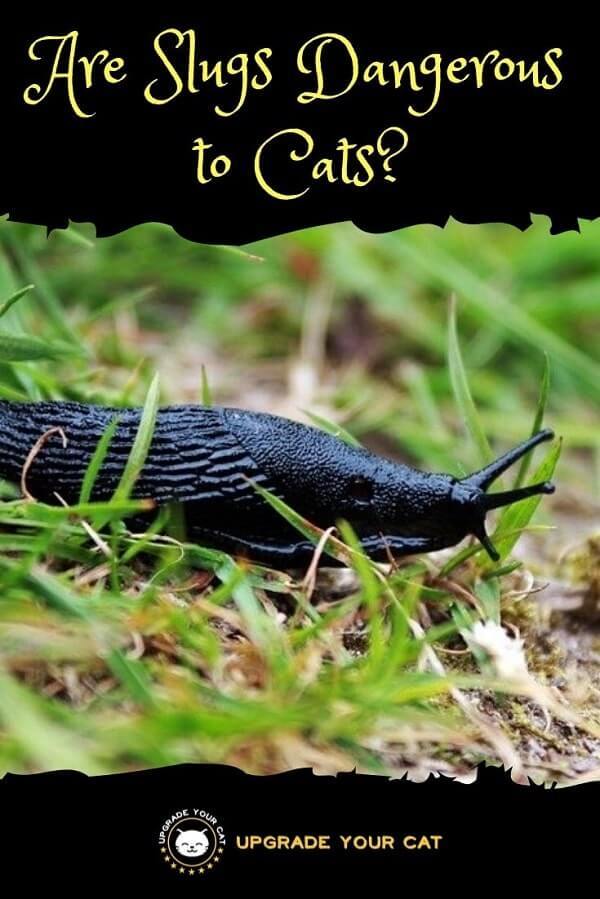 I’m sure I am not alone when I say that slugs are horrible little critters. They make a mess around the garden, eat my plants and flowers, and the last thing I want to do is come across one when I’m in my yard.

If you frequently see slugs in and around your yard, you’re right to investigate if these shellless snails pose any dangers to your cat (or you).

Here is everything you need to know about these slimy creatures, and the possible risks they pose to cats and other pets.

I don’t blame you if you’ve never put much thought into what slugs are exactly. I mean, they’re just snails without a shell, right?

That’s actually not that far from the truth. But then, you also need to know what a snail is…

According to Wikipedia, “Slug” is a name for any shell-less terrestrial gastropod mollusc. Not surprisingly, “Snail” is the word for any such creature that has a shell large enough to hide inside.

Slugs have two pairs of tentacles. They use one pair to see and sense light, and the other to sense smells. Their body is called a “Foot” because they use it to move around by creating rhythmic waves.

They are slimy because they produce mucus to keep their tissues moist. Otherwise, they are prone to desiccation, which means they dry up and die. This is why you see all those slimy trails around the garden in the morning when they’ve been active overnight.

Slugs like to eat plants and other small creatures. The chewing on plant leaves is the main reason gardeners go to great lengths to get rid of them, they can do quite the destruction job on a beautiful plant overnight.

Slugs can carry a number of different parasites that are potentially dangerous, even fatal to cats, other pets, and humans.

There was a well-publicized case in 2010, where a man ate a slug as a dare. The man contracted a rat lungworm – a parasitic worm that lives in rats, and can be passed on to slugs.

This left the man paralyzed after the lungworm infested his brain. So, while this is an extreme case, it’s an example of the dangers slugs pose if eaten. Now, I know a human eating a slug is incredibly rare (I can’t think of anything worse), but we can’t rule out a cat biting or eating one.

On the topic of gastropods don’t miss – Are millipedes poisonous to cats?

Are Slug Pellets Harmful to Cats?

I mentioned that a lot of people try to get rid of slugs as they are garden pests. The problem with doing this, however, is that slug pellets are harmful to cats too.

At least, almost all of the commercial pellets that contain poison designed to exterminate snails, slugs, and other such creatures do. It’s the compound called metaldehyde that is extremely dangerous to pets.

Remember how I explained that slugs produce mucus to keep their bodies slimy? Metaldehyde stops them from producing mucus, along with bloating them, causing them to dry out and die.

If a cat eats slug pellets or another poison containing metaldehyde it will affect their nervous system. Symptoms include tremors, drooling, and restlessness, leading to seizures and death. This can all happen within hours of eating some pellets, it’s that toxic to pets.

Apparently, the pellets are designed to attract slugs by smelling like food, which can also attract cats. They are supposed to taste nice too to ensure they are eaten.

So, you should never use any form of slug poison in your garden if there is any chance a cat or another pet will come into contact with them.

In Summary – Are Slugs Dangerous to Cats?

Slugs are not dangerous to cats in the way that they can bite or harm a cat physically. Neither do they possess any poisons or ways to sting cats. (Unlike some caterpillars as I explain in this article – are caterpillars poisonous to cats?)

As I’ve explained in this article, however, they do pose a risk to a cat if they are eaten. Slugs carry some nasty parasites that are potentially fatal to pets, as well as humans. There is also a risk associated with cats eaten slug pellets, or even eating a slug that has just ingested some pellets.

The bottom line is that slugs pose some risks to cats. However small or remote the chance that your cat will try to eat one, it’s best avoided.

If you have slugs in your garden I recommend taking steps to get rid of them – without using slug poisons and pellets containing metaldehyde. There are some safer alternative ways to get rid of slugs, try any of the following:

Pet-Friendly Poisons – It’s not three words you here in the same sentence very often, but there are some slug poisons that a lot safer to use around pets.

I identified metaldehyde as the main chemical that’s poisonous to cats above. Slug poisons that are “Safer” for pets contain iron-phosphate, which is just as effective at killing slugs and a lot less harmful and tempting for cats.

Here’s an example of pet-safe slug poison available on Amazon.

Trap the Slugs – One of the safer ways of removing slugs from your garden is using a slug trap. These are basically just plastic boxes that attract slugs and trap them so you can dispose of them.

These do not require any poison, they do recommend you fill them with beer though – apparently slugs like a drink!

Here’s an example of a slug trap available on Amazon.