Are Stink Bugs Poisonous to Cats? (That Smell…Ewww) 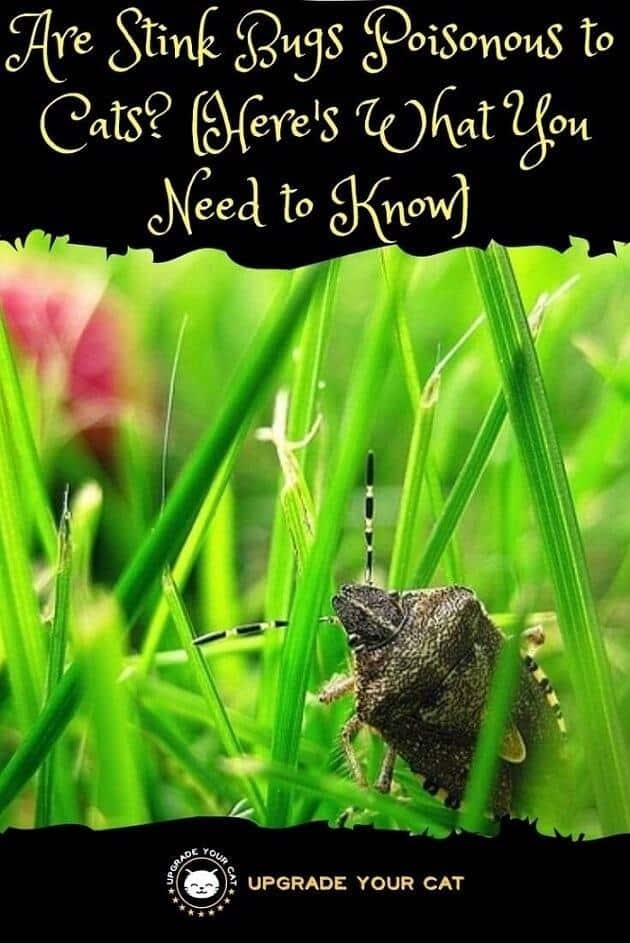 If you’ve ever gotten too close to a stink bug you’ll know it. They release a foul odor as part of their defense mechanism against predators and threats.

The smell is so bad that it can make your eyes water, irritate your skin, you’ll feel like being sick, and you will be offended.

So, I don’t blame you for wondering if this odor stick bugs spray out is toxic, and you’re not the only person to ask; are stink bugs poisonous to cats?

I grew up with stink bugs in my parent’s yard, unfortunately. So I have a decent amount of experience of these little pests.

The good news is that I can put your mind at ease regarding your cat’s safety. Stink bugs are not poisonous. They do pose some other threats, however, and actually, they are fairly interesting little bugs.

If you have stink bugs near your home it’s a good idea to get clued up on them and do everything you can to avoid them and their horrible smell!

What Are Stink Bugs?

Stink Bugs, Shield Bugs, or Brown Marmorated Stink Bugs which is their full name are mottled brownish-grey insects that are around ¾ of an inch long.

They have a shield-shaped back, which actually provides them some decent shield and protection against predators. But their real defense is the foul-smelling odor they spray to ward off predators or threats.

They are a real pest to farmers as they can do considerable damage to crops. They like to suck and nibble on fruits and vegetables and can do a lot of damage in a small space of time.

Stink bugs are also a hazard to homeowners if they start nesting in small crevices around the home. They can damage furniture and structuring around the home, and of course small awful which no one wants.

Why Are They Called ‘Stink’ Bugs?

This should be obvious, but for those who need clarification – it’s because they release a foul smell and stink out the area around them.

The smell they spray can travel a few inches, and the smell can linger for hours. So, as tempting as it is, I recommend avoiding them at all costs.

If their spray comes into contact with your skin it can stain for days and the smell is going to linger and go everywhere with you. It’s really unpleasant, I’ve had it happen to me once. Never again.

This is the burning question for anyone who hasn’t smelled a stink bugs defense odor.

You may have read how foul it is, spoken to people who have lived to tell the tale, but until you smell it yourself, you really aren’t going to know just how repugnant it is.

I can tell you first hand, It’s truly awful.

I found it hard to put into words so I read some replies from other people. Interestingly, although everyone agreed it really is a foul smell, a lot of people kept comparing it to the smell of;

Coriander, or cilantro, which is the same thing.

I know what you’re thinking, this is a herb that has a nice smell. I’m not sure why this is what most people compare the smell too, even Wikipedia cites coriander as the smell.

The interesting thing about coriander is that a lot of people don’t like the smell of it. For those, it’s a really foul smell that reminds them of rotten food.

If I were to describe the smell a stink bugs releases, I’d say it’s like rotting fruit. With a strong musky scent and a horrible after taste that doesn’t leave you for a long time.

Are Stink Bugs Poisonous to Cats?

Stink bugs are not poisonous to cats no. Neither are they poisonous to humans as they don’t carry any toxins and can’t poison anyone or anything.

This doesn’t make it any less important to avoid them and their spray, however. Some people might even say that the smell they let off is worse than poison!

Related: Check out are millipedes and centipedes poisonous or dangerous to cats.

According to pest control experts Orkin (source) there are no known long-term health effects if a cat has eaten a stink bug.

The problem, however, is that stink bugs let off their foul secretions when they are in danger or are crushed. This means it’s almost guaranteed that your cat will ingest that foul smelling fluid as they are eating the bug.

This can cause irritation in their gastrointestinal tract. Which makes sense as it’s really just one of the most disgusting smells I know I’ve come across. The symptoms include vomiting, drooling, and expect to see a very unhappy kitty for a day or so.

Related: Check out can cats eat silverfish or caterpillars (and the risks associated to doing so).

Stink bugs do not bite, no.

They are responble or damaging crops and plants by nibbling on them, but with all my interactions with them and as far as I can find out through research, they will not bite cats, or humans.

If they, in fact, do bite, it’s not hard enough to do any damage or really notice. Let’s be honest here though, the stink they let off is way worse than any bite they could do.

Stink bugs really do live up to their names. It’s not even a slang term, they really are called Brown Marmorated Stink Bugs so that should give you a good idea what you’re up against.

In a nutshell, here are the answers to questions you probably have if you know your cat is coming into contact with them:

Are stink bugs poisonous to cats? – No, they do not possess the ability to poison any other creatures.

Can cats eat stink bugs? – They can, but it’s not advisable as they will release their odor when they are chewed on (gross, right?) which will almost certainly cause some stomach issues for kitty.

Do stink bugs bite? – No, they destroy fruits and vegetables by sucking on them but they will not bite cats. Or us.

How bad do stink bugs smell? – Very, very bad. Although you’ll find most people say the smell is similar to coriander, it’s not what you’re thinking. It has a pungent rotten undertone that’s hard to explain. But trust me, it’s really offensive.

I hope this clears up all the questions you had about stink bugs and cats. If you have any further questions, feedback, or comments, as always I’d love to hear from you.