Why Does My Cat Sleep in the Doorway? (5 Explanations) 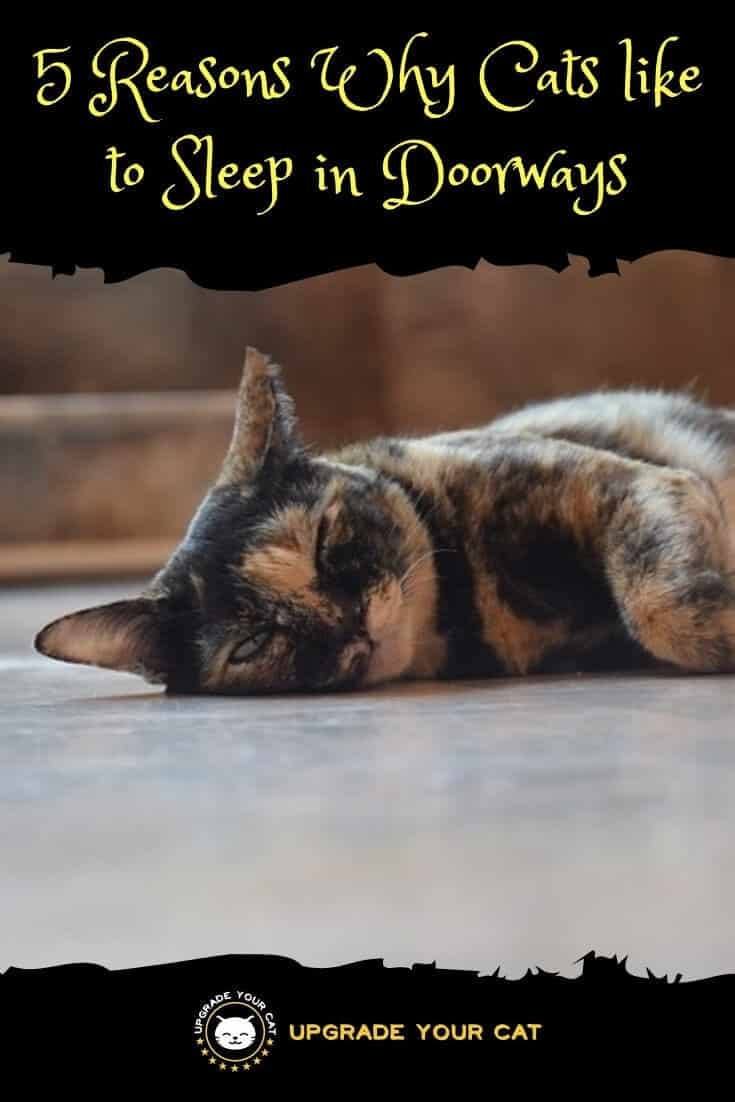 If you’re wondering, why does my cat sleep in the doorway? Because, well, it’s inconvenient and annoying – there are some reasons I can dig into to help explain this behavior.

The important I will say off the top is that while your cat might look like they are sleeping. Or indeed they will sleep a little, it’s a strategic choice to be in the doorway and they will reveal their reason when they see the opportunity to do so.

With that in mind. Here are a few of the reasons that will help explain why your cat chooses to sleep in a doorway in your home.

5 Reasons Why Cats Sleep in Doorways

Two Rooms Are Better Than One

Cats love having a good range of visibility around them. On this basis, being able to see what’s going on in two rooms is better than just one room. It’s basic math – but explains the appeal for some cats.

One of my cats spreads herself out in the kitchen doorway most days. I’m sure she is keeping one eye on the fridge and other food-related things going on in the kitchen. While still knowing where I am when I’m chilling on the sofa.

The same cat that lays in the kitchen doorway also seems to take some satisfaction from taking a playful swipe at people stepping over her. It’s one of those cat things most of you reading this will be nodding in agreement with.

They make you step over them, then they give you a smack for it.

Let’s think of it this way. Do our cats ever hang out in doorways on the other side of the house where no one is going to pass by? I’ve never seen it with my cats, and I’m sure it’s not a coincidence.

Because Cats Know How to Be Annoying (While Still Being Cute)

Let’s be honest with each other, as one loving cat owner to another. Cats do lots of annoying things. They push things off counter tops, lay in places that can cause us serious injury, shred and damage things around the home.

But they are still super cute and it’s easy to forgive them, isn’t it!

On that note, here are the best couch materials to resist cat scratching. Plus, some effective tips to stop middening, and naughty cats peeing on your furniture.

Laying in a doorway is just another of those annoying little things that cats clearly want to do. They know it’s annoying, but they just can’t help themselves.

If you have a curious cat that likes doing mischievous and (slightly) annoying things you might just have to chalk this up to another of them. Try not to give them too much attention and never, ever, show them it annoys you!

It Doubles up Their Escape Routes

Animal behavior experts always look back to the instinctual behaviors of cats to explain why they do certain things. I’ve studied the topic a lot and find it to be both true in most cases, and very interesting.

It’s true that cats sleep or place themselves in ways so that they can see what’s approaching, and have escape routes available. So, it’s fair to assume that they are drawn to hanging out in doorways as they have two directions to easily escape in.

It’s Got Your Attention Before, Hasn’t It?

Cats love attention and getting a reaction from us – when it suits them of course. Well, most cats do. I know it’s true about my cats, although they have chilled out more as they’ve aged.

If laying in the doorway has provoked a reaction from you before they will associate this with whatever it is you did. If it worked for them and they liked it, they will sleep in the doorway again to get a similar reaction.

This is often why cats sleep in bedroom doorways. They know you’ll be coming out in the morning and they can get your attention and remind you it’s feeding time.

How to Stop Your Cat Sleeping in Your Doorways

If you’ve had it with your kitty laying in a doorway and had one too many near misses with a swipe, or tripping over when carrying a cup of tea. Don’t despair.

I’ve never met a cat, or dealt with a cat behavior problem that couldn’t be changed. At least not changed enough to make a difference, I’m not saying your cat will never darken a doorway again.

If you want to stop this behavior, I suggest trying one or more of the following tactics:

Keep Moving Them On

This method takes some persistence and patience on your part but is almost always successful in my experience.

Just simply keep moving them when they are trying to get comfortable in a doorway. They will soon (or eventually) realize that it’s not worth the effort trying to sleep somewhere they are always moved on from.

Cats and textures they don’t like, this goes back to when I was a kid and my Nan used to put aluminum foil on her kitchen side to stop her cat, Lily going on there.

Don’t worry, it’s not a permanent thing. You won’t need to have aluminum foil, newspaper, or any of texture or material your cat will not sleep on in your doorway forever.

Just place something there when you think they are going to try and settle, or if you’ve just moved them so they don’t go back. After a few weeks, they should have found somewhere else to sleep.

The good thing about scents that most cats don’t like is that they are scents most people do like. Such as citrus scents, which always smell fresh, cinnamon, which reminds me of festive periods, and mint, which is, well, minty fresh.

It’s not as cruel as it sounds. Just place a half cut orange on a plate in the doorway, or spray a water and scent mix when they are threatening to settle and they should get the hint.

If your cat likes to sleep in a doorway in your home and you’re wondering why it’s likely to be due to one or more of the following reasons:

The key takeaway is that it’s not that hard to train them not to sleep in doorways if it’s really annoying or an inconvenience to you.

Start moving them and using a scent, object, or texture in the area they want to settle down in to make it uncomfortable for them.