Why Does My Cat Nibble My Nose? (Several Reasons) 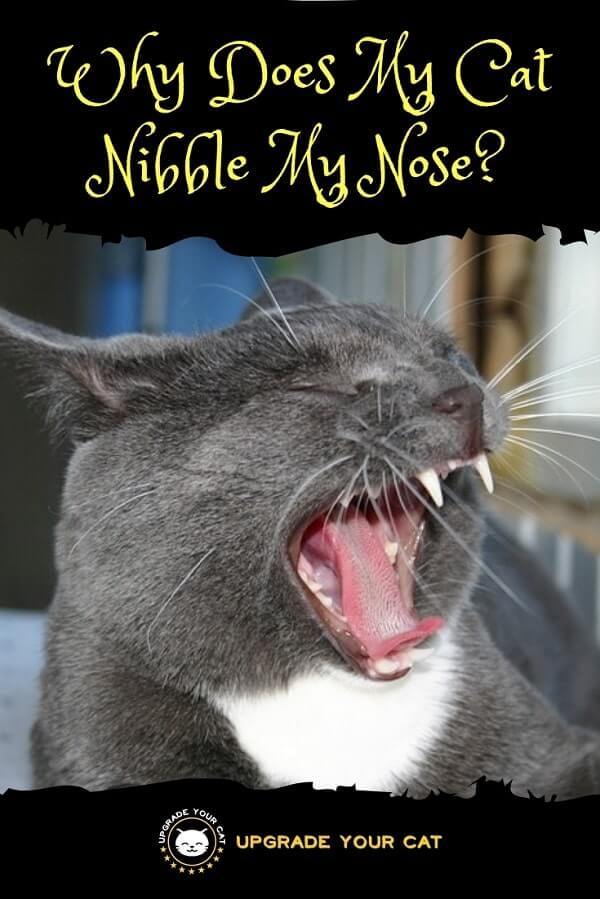 Have you ever been sharing some cuddles with your cat, only to find they nibble on your nose?

It’s not that uncommon. It’s happened to me more times than I can remember, along with plenty of other cat owners.

But, it does raise the question – “why does my cat bite my nose?”

Well, there are actually some logical reasons that help to explain why cats have a nibble on people’s noses when they get the chance.

Take a read through the following possible reasons and see which you think apply to your kitty.

They’re Being Nice to You (Honest)

A little nibble on the nose is actually a sign of affection. You’d soon notice the difference if your cat bit you with bad intentions, let’s make that clear.

If your cat is a purrer when they’re happy, they’ll probably be purring too to back this up. Every cat has their own little personality traits and ways of showing you they love you. Whether it tickles or even hurts a little, just remember it’s a sign that they love you.

It’s Something That’s Sticking Out

We can’t ignore the convenience of a nose sticking out in a cat’s face as the reason why they give it a nibble. Some might say it would almost be rude not to!

It’s a bit like sticking a finger in a cat’s face. They are almost certainly going to lean in for a sniff to investigate. They’ll probably rub the glands on their cheeks across your finger and might even take a lick or a nibble.

They’re Marking You with Their Scent

Cats have multiple scent glands located on their heads. I’m sure you’ve seen your cat rubbing the side of their face on objects around your home, doing this they’re leaving their scent around to let other cats know it’s their territory.

If they follow up a nibble on your nose by rubbing the side of their face on yours, particularly the cheek area, then your cat is marking you. It’s nothing to be grossed out about, they’ve been doing it in less obvious ways before.

It can be both shocking and confusing when a cat suddenly lashes out aggressively and scratches or bites us. Especially if you thought you were sharing a moment with petting and some hugs.

Unprovoked or petting-induced aggression is often a sign that your cat got a little too comfortable and had some overwhelming feeling of vulnerability. They can instinctually lash out if they feel like this.

This article on the ASPCA site does a good job of describing why some cats turn aggressive and the signs to look out for. You’ll get to know your own cat’s limits and tolerance over time and be able to better judge it.

Another behavior you will be very familiar with is your cat grooming themselves. Cats can spend as much as 50% of their awake time grooming, so it’s something that comes instinctually.

This means you might find your nose being groomed or checked for grooming potential. Your cat is usually acting on autopilot and will often surprise themselves when they realize what they’re doing.

A bit like how most cats react to being itched at the base of their tail by licking something.

This isn’t as crazy as it sounds. A lot of cats like the taste of human skin, especially if you’ve been sweating a little. When we sweat, our skin has a salty taste. It’s not very noticeable to us, but cats have a highly tuned sense of taste.

We can’t rule out that they might be picking up another taste they like too. Is it possible you’re a messy eater? I shall not cast any aspersions, rather I will leave this up to you to figure out.

They Want Your Attention

Cats do a number of odd things to get our attention. You’ll know your cat better than anyone, does anything come to mind?

My cat likes to hang out in doorways and take a swipe at me (here are some reasons why cats like to sleep in doorways by the way). She also gets under my feet, climbs onto my chest if I’m laying down, and might just nibble my nose if the chance presents itself.

Much like toddlers, cats test the boundaries from time to time to see what they can get away with. If this means seeing if they can bite or lick your nose and get away with it, that’s what they’re going to do.

It’s how you react that’s going to determine if they do it again. Or, if they push the boundaries a little further next time. So, think wisely about how you react. Unless of course, like some people it comes as a shock makes you (and your cat) jump.

Why Does My Cat Want to Lick My Nose?

Nibbling, licking, these are two very similar things. If your cat is trying to lick your nose, I’d still investigate all the same reasons as I’ve listed above. It’s very likely going to be one of these reasons.

Some cats are just prone to licking things. I had one cat that I adopted at around 8-weeks and she used to always lick my fingers, it was cute at the time. But as she grew up she continued to lick me at every opportunity, and it became less and less cute as she got bigger!

Why Do Cats Gently Bite Your Nose?

Again, the answer to this question is the same as for the above questions. Gently biting or nibbling is the same thing. If your cat is being aggressive and biting you hard, that’s something else.

How to Stop My Cat from Biting My Nose?

If your cat keeps on biting or nibbling on your nose, I bet it’s starting to annoy you, right?

There are a few things you can do to stop them from biting your nose and change their behavior. A couple of key principles when training a cat:

Cats are very trainable, and it is possible to change their behaviors. It’s going to require patience and consistency, but it’s worth it in the long run, trust me.

So, using those key principles I mentioned. Whenever your cat bites your nose, say “No” and put them on the floor far away from you. When you get to the point where they will stop before doing it and as soon as you say “No”, you can give them a treat.

If you also do this for other behaviors you want to change, such as scratching the carpet, attacking you while you’re sleeping, and anything else that’s creating a rift in the home, you’ll notice the changes in how your cat responds to your commands.