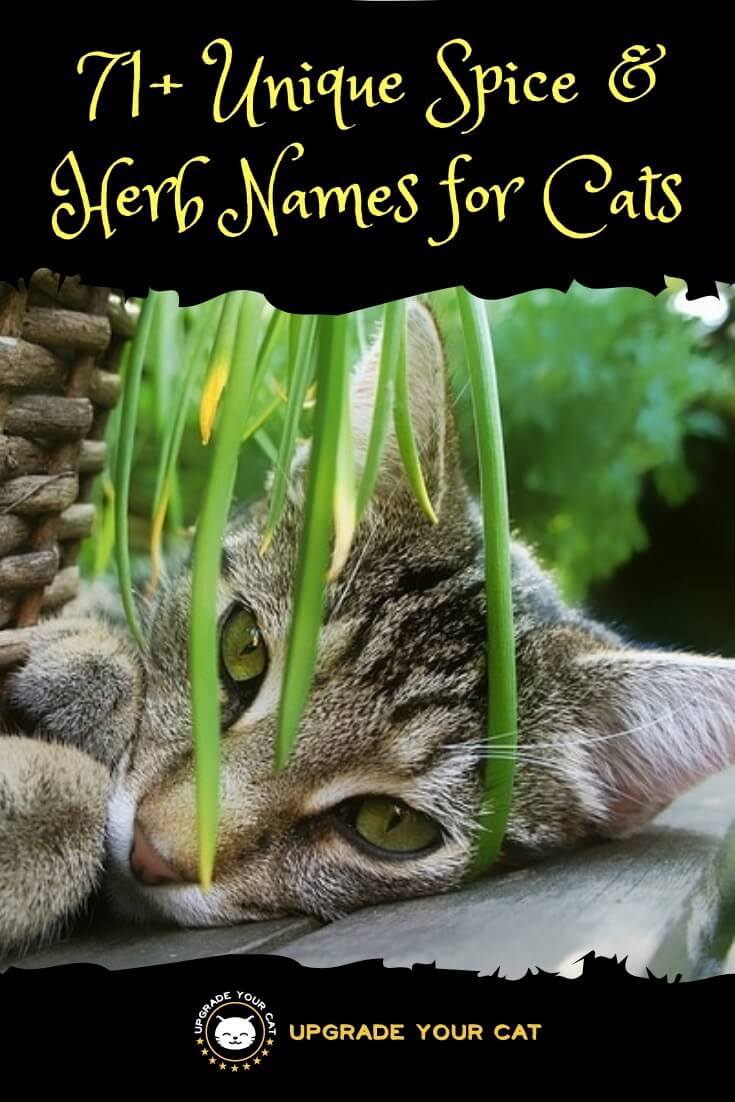 Maybe you’re into cooking, or maybe you’re just looking for unique and interesting sounding cats’ names. Either way, you can’t go far wrong with spice and herb names for cats.

It’s fun naming a cat after something that either resembles their personality or the way they look. Spices and herbs cover a wide range of looks and flavors to help you do this.

From hot and spicy, to rare, unique, and interesting. I’ve put together a list of spicy names for cats that’ll hopefully help you solve the problem of finding the perfect name for your bundle of joy!

Here is a list of herb and spice names that I thought sounded more appropriate for males cats than females. You might disagree, but most are pretty good unisex names anyway.

Take a look through the list and see what you think. You might just find the perfect name for your little guy, that’s the goal!

Abodo – This Portuguese stock comprises of several spices and herbs, and makes for an interesting kitty name.

Allium – An aromatic plant that’s part of the onion family.

Allspice – A spice made from dried berries of the Pimenta dioica plant. Smells of nutmeg, cloves, cinnamon .. a great Christmas cat name.

Basil – A herb commonly used in cooking, and also a fairly popular pet name. I’ve known both a dog called Basil and a hedgehog!

Bumbu – Bumbu is the Indonesian word for spices. A great way to give your cat a cool sounding spice-related name.

Caraway – These are highly aromatic and distinctive smelling seeds. They smell like licorice, so might be on the shortlist for a dark-colored unique kitty.

Catnip – I couldn’t put together a list of herbs without including catnip. I’ve heard of this being used to name a cat before, and it sounded pretty cool.

Cumin – This earthy, nutty-tasting spice is warm with a nice mustard yellow color. If that somehow describes your kitten, it’s a must-have.

Curry – Everyone knows curry. It’s a combination of spices that make for a unique and well-known flavor.

Dill – This is one of the most commonly used herbs with fish dishes. A fitting name for cats as they’re always trying to make fish a dish of their own!

Dukkah – If you’re looking for an Egyptian food name for your cat, Dukkah is that name.

Foxglove – The Foxglove plant is actually fairly toxic to cats, so there’s a little irony to choosing this as a name. I like the sound of it though.

Galangal – Similar to ginger, which is more of a girl cat name so I’ve included it below. Galangal has a more masculine sounding name to me so I added it here.

Golpar – This actually has a pretty bad smell to most people. Even being described as smelling like ‘old socks’. Choose this as your own risk.

Jimbu – This is a way to name your cat after a different culture. Jimbu is used in regions of Nepal in the Himalayas.

Juniper – Another spice from the Himalayas.

Kaffir – This herb is the leaves from Kaffir limes. So a citrusy, tangy name for a kitty.

Kokum – Suitable for a dark colored cat, this brownish-black spice has a sweet and sour taste.

Licorice – Licorice is one of those love it or hate it flavors, right? I’ve seen plenty of pets named licorice before, it’s a cool cat name.

Mace – Another Xmas type spice that smells of cinnamon, nutmeg, and all those kinds of spices.

Mahlab – This is one of the most interesting spices I’ve ever tasted. It’s kind of like a combination of cherries, almonds, and roses if you can kind of imagine that.

Merken – A hot strong-smelling spice. Pretty firey when used in the right dishes.

Pepper – Peppers come in many forms and tastes. But best of all it makes for a great kitty name.

Pimento – Also called ‘cherry peppers’, pimentos are bright red and can pack quite the punch.

Sabola – A spice used in curries. It’s only a popular name for babies, so it could be a possibility for your kitten or cat.

Spearmint – A name with a fresh meaning! I had a dog called spearmint growing up, sounds a little weird now thinking back. But someone out there might like it.

Sumac – A bright red spice with a tangy, lemony flavor.

Tamarind – A super-charged herb with loads of positive health benefits.

Vanilla – When someone hears the word vanilla, they think of plain white. If you have a white kitty, this has to be up there as a descriptive choice.

Wasabi – Wasabi has an intense heat that hits you like strong mustard. It’s one of the Japanese food names for cats.

Zest – Zest is a great name for energetic kitties.

Here are the spicy and herby names that sounded like they fit a girl cat or kitten more than a boy. Take a browse and see what you think.

Angelica – What a lovely name for a female cat. It’s a sweet-tasting root.

Anise – Also called aniseed and tasting like licorice, this is a love it or hate it spice. I think it’s a good choice for black and white cats personally.

Annatto – A spice native to Brazil and Mexico, it’s used to add orange or yellow colors to dishes and adds an aromatic flavor.

Berbere – I like this name for any unique cat, whether that’s a unique personality or look. It’s spicy, sweet, citrusy, and more all wrapped up in one spice.

Cacao – A name for chocolate, brown, and any color of cat in between. This is the spice used to make chocolate.

Canella – Another name for cinnamon.

Chicory – A bright blue plant, and often mixed with coffee to reduce the bitterness of coffee.

On that note – check out this huge list of coffee-inspired cat names if you’re a coffee lover.

Chili – This is the name for a blend of spices used in Latin-American cuisine. Known for packing a hot kick more often than not.

Cinnamon – Ah, my favorite spice and a favorite for pet owners around the world as a name for their little friends.

Clove – The aromatic flower buds from the clove tree.

Elderflower – A deeply floral herb commonly used in drinks and for its strong aroma.

Fennel – Both a herb and a spice, and a nice short punchy name for a cat.

File – Made from grounding the leaves of the North American Sassafras tree, this is an unusual and rare spicy herb.

Garlic – Another herb that’s toxic to cats (and dogs). It doesn’t mean you can’t use it as a name though.

Ginger – An iconic name for female animals around the world that are ginger in color. An obvious choice, but still really cool, don’t let it’s popularity put you off if you like the sound of it.

Habanero – A fiery pepper that delivers a nice hot kick. If you like spicy foods that is.

Hyssop – A spice used in condiments to give foods some extra flavoring.

Jasmine – This is another classic female name that you can’t do wrong with. A floral herb with a nice pink color.

Loomi – A Middle Eastern spice with a unique sour and tart flavor.

Masala – A combination of spices used in Indian cuisine.

Mustard – A condiment made from mustard plant seeds. It comes in varying tastes covering a spectrum of colors from yellow to brown.

Nigella – Small black seeds that go under a few different names. I picked this one for the list because it’s a human name that also makes for a nice cat name.

Nutmeg – A festive spice that is already commonly used as a pet name. Almost everyone reading this will be well aware of nutmeg.

Paprika – A hot and spicy red spice. I’d attach this name to a fiery and energetic cat.

Piper – This West African spice is a hot one.

Poppy – Poppy is a cute cat name. It’s actually been the most popular name for cats and dogs for several years in the past (source).

Safflower – Similar to saffron, safflower is a cool sounding name.

Saffron – As one of the world’s most expensive spices, this is a name reserved for a special kitty. Isn’t that every cat according to their owners? Well, almost, yes.

Sesame – I had a bird called Sesame growing up.

Star – Awe, who wouldn’t want to call their little star, a star. Ok, it’s not to everyone’s liking, but it’s a decent spice-related name.

If you didn’t find what you were looking for but still want a food-inspired name for your cat, check out this long list of cheese names for cats.

Otherwise, maybe you can go in a different direction and find inspiration in these posts:

Huge list of Lord of the Rings names for cats.

Let me know how you get on below, thanks.