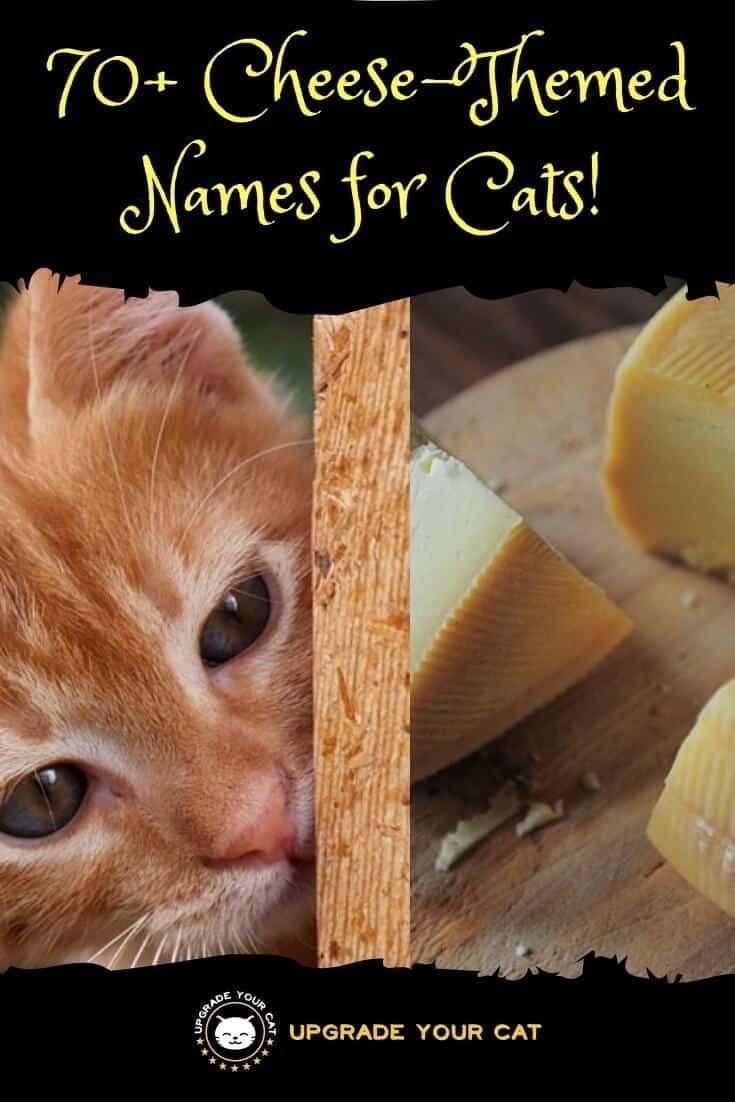 If you’re searching out a list of cheese names for cats, you’ve come to the right place.

Food names for cats have always been popular, as they are for a lot of pets. But naming a cat is hard enough without scrolling through hundreds of possible names.

If you are a cheese lover or the first time you set eyes on your kitten or cat you knew they needed to be named after a cheese, I applaud you.

Cheeses actually have some of the most unique and interesting sounding names. They also have some interesting tastes and qualities, if I inspire you to try a new cheese – that’s a bonus!

So, I hope you find exactly what you’re looking for – a cheese-inspired name that suits your cat perfectly!

Beaufort – A firm cheese from the French Alps. Soft yellow with a darker exterior.

Blue – Ah blue cheeses, full of cultures and a strong, distinctive smell, name your cat wisely after a Blue.

Boerenkaas – A cool sounding name, right? It’s a Dutch cheese made from raw milk and sometimes contains herbs and spices. (Click here for a huge list of herb and spice-inspired cat names!)

Boursin – This soft cheese is a favorite in our home, and I thought it made for a cool sounding name for a kitty.

Cabrales – This is a Spanish blue cheese. It’s made with pure unpasteurized cow’s milk and has a strong, spicy taste. I recommend checking this one out if you can, and worth considering as a name.

Caprino – Traditionally made with goat’s milk, this is a smooth and flavorsome cheese.

Comte – A French cheese, as a lot of cheeses are (they love creating and consuming cheese in France). It’s one of the ‘rubbery’ texture cheeses, awesome in a sandwich.

Durrus – An Irish cheese made with washed-rind cow’s milk. It has an interesting taste, I’ve had it a couple of times. Cool sounding name in my opinion.

Edam – One of the classics, Edam is a Dutch cheese with a mild flavor and that distinctive red wax coating.

Epoisses – Epoisses de Bourgogne is a French cheese made in the Epoisses Valley. It’s creamy, chewy, and firm, all at the same time!

Grayson – I’ve had this US cheese at least once that I can remember. It has a nutty and beef taste with a smooth texture. Cool cheese, and an often-used pet name.

Hooligan – If you’re going to name your kitty hooligan, you’re setting yourself up for a handful. And a lot of explaining. At least you can say you named them after a cheese from Connecticut in the US.

Jack – An easy one for a boy cat name. Monterey Jack is a really popular cheese in the US, it’s a mild cheese that goes with just about anything.

Jarlsberg – I love Jarlsberg, and it’s a cool-sounding word that can be a cat’s name for sure. This smooth nutty cheese is native to Norway.

Leicester – Named after the city where it’s made, Leicester in the UK, this red cheese is a crumbly one perfect with crackers or biscuits.

Limburger – This is one of the smelly cheeses. Originating in the Limburg area, this is a good name for a cat that looks like he’s going to be a problem.

Longhorn – Longhorn also called Colby cheeses is a large round cheese produced in the US. It’s a mild one, but the name sounds a lot more menacing.

Mahon – Also called Mao cheese, the Mahon is a Mediterranean cheese and also happens to be a fairly common surname.

Manchego – Another Spanish cheese, Manchego is aged for a long time and has a white color and smooth texture. A unique looking cheese, a perfect name for a while, unique looking cat.

Mascarpone – A soft, fluffy, Italian cream cheese that’s commonly used in desserts and other treats. I knew a cat called Mascarpone once, it’s an interesting name but works well.

Montcabrer – A Spanish cheese made with goat’s milk.

Monterey – The other half of the name Monterey Jack. Both words work well as a name for a male cat in my opinion.

Morbier – If you’re trying to match up the cheese with how your cat looks. Morbier has a distinctive black line running through the middle, I’m sure there’s a cat look-a-like out there somewhere.

Muenster – This sweet and nutty cheese has a smooth texture and an even smoother taste.

Pecorino – A hard Italian cheese. Black on the outside, white on the inside. Sound like I describing your cat?

Provolone – This cheese always comes in a sausage shape. It’s a mild cheese with a soft yellow color. A nice word that rolls off the tongue nicely though.

Reggiano – This is the same as a Parmesan. It’s a hard cheese used for grating mostly. You’ll end up calling your cat ‘Reggie’ or ‘Reg’ for sure.

Romano – This is a general term for a lot of salty, hard cheeses. It’s also a name I’ve heard used with pets before, so worth considering.

Roquefort – One of the most popular blue cheeses in the world, Roquefort is delicious (if you like blue cheeses).

Scamorza – This stretched-curd cheese looks like clouds or balls of butter or something. Very unique, and a nice word to take as a name for you kitten or cat.

Shepherd – A name for a range of cheeses made with sheep’s milk. Also a pet name I’ve heard used, not sure if it was due to the cheese or not though!

Stilton – This British cheese is one of the stinky, pongy, pungent, and smelliest blue cheeses.

Stichelton – A cheese with long-lasting flavors of beef, apples, and all sorts. Very interesting, one for the cheese connoisseurs amongst us. A great name, even if you’re hearing about it for the first time here.

Taleggio – A mild cheese with a fruity tang. Fruit names for cats a super popular too while we’re on the fruit topic. What do you think about this one?

Asiago – An Italian cow’s milk cheese that’s super-smooth in texture. A nice explanation for a smooth female kitty if you like the sound of this as a name.

Bergere – A blue cheese made in the US. Bergere is a cool name, you can pronounce it a few different ways to suit how you like too.

Brie – This soft cow’s milk cheese is actually a name used for people and animals, so it’s an obvious inclusion for the list.

Cantal – I like Cantal as a name. Reminds me of Chantal, but without the ‘h’. It’s a firm cheese, mild taste, nothing special on that front. Sorry to any Cantal lovers!

Charolais – Referred to as a ‘rich and sophisticated cheese with a nutty flavor’ this is a special cheese name for a special kitty.

Cheddar – The classic. Cheddar is the staple of the cheese world. It’s a name I’ve heard used for pets, so fine for a kitty if you like the sound of it.

Colby – Similar to cheddar, Colby is a US cheese made from cow’s milk.

Emmental – I love Emmental, and I love how it has that stereotypical cheese look. It has those large holes in mice poke their heads out of on cartoons, it’s cool. Great cat name too.

Feta – Another cheese I can’t get enough of. This Greek cheese is white and crumbly and just goes perfectly with any kind of salad. Makes for a nice short, snappy cat name.

Folie – A fresh cream cheese made with sheep’s milk.

Goat – A cheese made from goat’s milk is simply called goat cheese. Goat also means the Greatest of All Time in sporting terms, so an awesome name for a special kitten.

Gorgonzola – ‘A veined Italian blue cheese’ that is very crumbly, and has a sharp salty taste. Not to everyone’s liking, but it makes for an interesting name.

Gouda – This mild, yellow cheese native to the Netherlands has a name I could easily see a small yellowish color kitten or cat having.

Grana – A white cheese from Northern Italy. Hard, crumbly, and not very common but well worth seeking out.

Gruyere – This is a classic Swiss cheese. It’s a pale yellow on the inside, with a darker yellow to brown on the outside.

Halloumi – Grilled Halloumi is a staple of barbecues around here.

Havarti – I like the sound of this word. It can be shortened to Hav, Havvy, and so on. A nice cheese too, a soft Danish.

Ibores – This Spanish cheese is a delicacy made in the Ibores region.

Leonora – This is a cheese made in the Leon region in North-Western Spain. Could be a name for a male or female cat I’d say.

Maasdam – Another Swiss-style cheese with the big holes running through it, but it’s actually a Dutch cheese.

Menonita – A Mexican cheese with a very Mexican sounding name that might jump out as a choice for you if you’re looking for that perfect cheese-themed kitty name.

Mozzarella – A soft, round Italian cheese. It’s a fun name that rolls of the tongue really well. mIght just be the name you’re looking for?

Normandy – As the astute cheese lovers amongst you will be aware or able to work out. This cheese is named after the region in France where it originates, Normandy.

Padano – A white cheese from Northern Italy that has a crumbly texture and delivers a smooth, mild taste.

Parmigiano – A hard cheese, typically grated onto pasta, pizza, and other Italian dishes.

Pepper – Pepper is just a good pet name. Plus, pepper and cheese is a combination that never fails. Unless, of course, you don’t like pepper or cheese.

Piave – Shaped like a large wheel when it’s produced, Piave is an Italian cheese made from cow’s milk.

Ricotta – Ricotta is a cheese made from the leftover milk whey from the production of other cheeses. It’s a creamy white soft cheese.

Roncal – This Spanish cheese is a hard and creamy cheese made from sheep’s milk.

Savoie – A beige cheese with a brown exterior makes this cheese an interesting looking, and tasing one. It dates back thousands of years, and it made in Savoy near the French Alps.

Serena – Another Spanish cheese made with sheep’s milk. It’s a bitter and salty cheese, not to everyone’s liking, that’s for sure.

Stanser – A smooth mild Swiss cheese. I like the word as a name, has a medieval sound to it in my opinion.

Telemea – A Romanian name has made the list. This cheese is native to Romania and makes a sweet-sounding female cat name.

Did you find what you were looking for in this list of cheese names for cats and kittens?

I am aware that there are hundreds of more cheeses out there. I had to draw a line somewhere though, but if you know a cheese that has an awesome name drop me a note and I will add it.

If you didn’t find a name and want to change verticals, check out:

Huge list of Lord of The Rings-Inspired cat names.