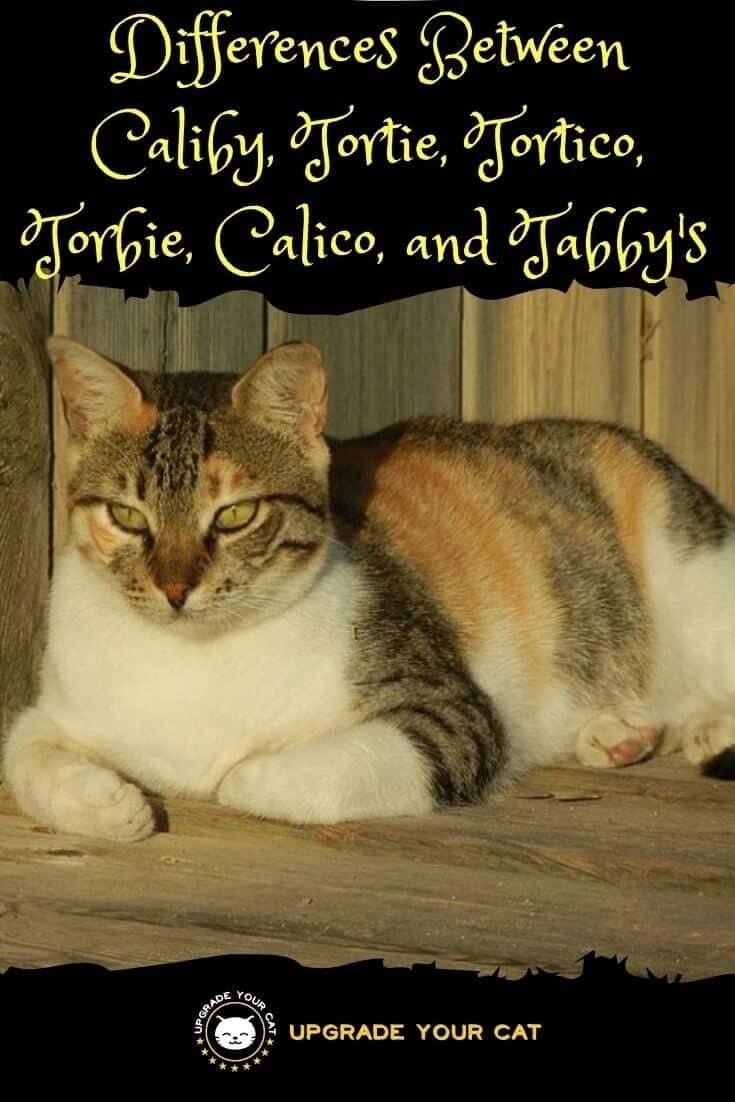 If you’ve heard the term Caliby cat but wasn’t sure exactly what breed or color of cat this referred to, I can explain.

A Caliby cat is a name given to a cat that has a combination of Calico and Tabby markings. Kind of like a half calico, half Tabby. As you can see from the header image, they are unique and interesting looking cats.

It can get a little confusing though. With names like Torties, Calicos, Torbies, Tabby, Tortoiseshell, and more. But there are certain colors and markings that separate these cats from each other in looks.

Here’s a breakdown of some of the lingo used to describe different coat colors, markings and disguising features of cats that share a lot of similarities:

The clue is in the name. ‘Cali-by’ means Calico and Tabby, and describes a cat with a coat that has markings from each type of cat.

I do have to say, however, that there are so many variations and possible mixes of markings on a cat that it often becomes a topic of debate. I’ve seen forum posts and discussion boards where cat owners all chipped in and debated exactly what to call a cat based on its colors.

Sometimes everyone can’t agree exactly what the right name for the color of a cat is when it’s a mixture of two or more different cats. Sometimes people refer to Caliby’s as ‘diluted Calicos’ too.

Despite what I see some people writing and saying, Tabby is not a breed of cat. The word Tabby refers to the pattern of a cat’s coat. Tabby patterns and markings are one of the most common types of coats, it’s likely you’ve almost certainly seen a Tabby before or even owned one.

There are five types of Tabby coat markings and patterns. You can tell these apart by the following characteristics:

The classic Tabby has those distinctive swirling patterns running from their heads to their tails. They have stripes running across their cheeks and foreheads, back, body, and tails.

The most popular colors are Orange Tabby’s, which have darker orange markings. And the brown Tabby which also has darker markings. They also commonly have white markings or white spots somewhere on their coats.

Also called an Agouti or Abyssinian Tabby, the Ticked Tabby does not have the same distinctive markings of the Classic Tabby. They do have Tabby markings, but their coat is formed with agouti hairs that have alternating light and dark bands.

As the name suggests, the Spotted Tabby has spots over their bodies, not stripes. Looking at their faces you’ll see the trademark Tabby stripes, but this line of cat has changed the pattern on their bodies.

A Mackerel Tabby has the same markings on their faces, but the markings on their bodies are much narrower. They are often referred to as ‘tiger markings’. The word ‘Mackerel is used to describe them as the pattern running down their backs looks l bit like a fish skeleton.

According to Wikipedia, Calico cats are classified as Calicos when their coats are anywhere between 25%-75% white, with large orange and black patches. This can even be more cream and grey in color.

They are interesting cats. Due to a rare genetic condition, they are almost always female. It’s important to note that calico is not a breed, it’s a name for the three colors and patterns they have.

Tortoiseshell cats are also called Torties for short, so you may have heard this term thrown around. They are often confused with Calicos due to having similar color coats and markings, but there are some subtle differences.

To be a Tortoiseshell, a cat must have two colors closely mixed in their coats other than white. You can tell a Calico apart from a Tortoiseshell because Torties can be almost all black or orange, they don’t have to have a lot of white on them.

My neighbor has one that is almost all black and white with orange patches thrown in for example. The most exotic color has to be the blue cream tortoiseshell, they have beautiful coats.

If a cat has a blend of Calico and Tortoiseshell’s markings, they are often referred to as a ‘Tortico’. Much like a lot of the other abbreviations, you can see the word Tortico is a combination of Tort(oiseshell) + (Cal)ico.

I’ve seen a couple of cats classified as Tortico’s. They had Tortoiseshell markings on their backs, with more white and Calico-type markings on the lower half. An interesting mix for sure.

A Torbie is a mix of a Tortoiseshell and a Tabby. It’s a blend of both names, with Tabby being ‘Tabbie’, but it makes sense if you look at it like that.

I’ve also heard them called ‘Torbie Tortie’ and ‘Patched Tabbys’ as they have Tabby markings with patches of cream and red.

I hope this article has helped shed some light on the different coat patterns, markings, and colors that make those subtle differences between a Caliby cat, Torbie’s, Tortico’s, Tortoiseshell’s, Calico’s, all the types of Tabby’s and everything in between!

As always, any feedback, comments, and personal stories are welcome. Just drop me a note below, thanks.