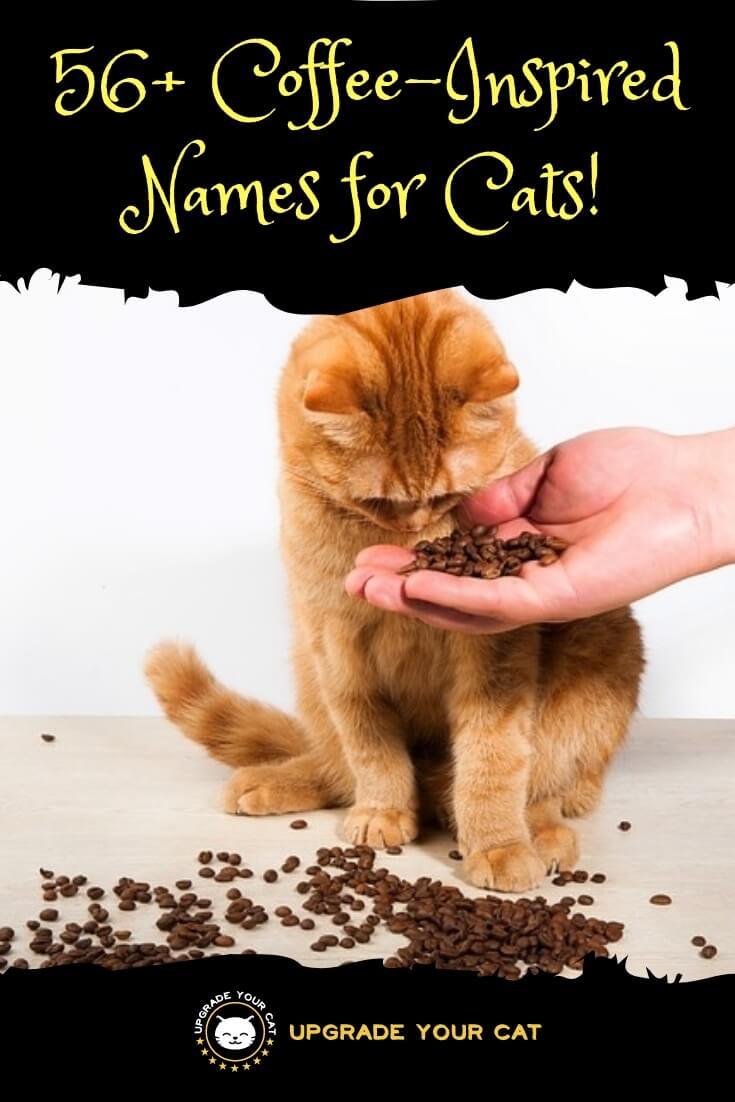 Are you a coffee lover? I am. Do you need a name for your kitten or cat? Perfect, in this article is a huge list of coffee names for cats that are all related to this wonderfully satisfying drink and are coffee-inspired in some way.

Naming a cat isn’t easy. I’ve been here a few times and know that all too well!

I’ve done my best to include every word related to coffee that I could think of that would make a cool kitty name. I really hope you find the perfect name in this list, good luck!

Affogato – A delicious Italian coffee-based dessert that has a hot shot of espresso and a big scoop of ice cream or gelato.

Americano – A Caffe Americano is a strong black coffee made by diluting an espresso with hot water. It’s one of my go-to’s when I’m at Starbucks or Costa, and I usually add a little milk.

Araby Wine – The Wine of Araby is a term steeped in coffee history. It’s the term Muslims used for coffee that drank in place of alcohol, which was forbidden.

Bailey – Ever tried a Baileys Irish Coffee? If not, you absolutely should. It’s made with coffee, Irish whiskey, Baileys, and whipped cream.

Barista – A barista is a person who prepared coffee in a coffeehouse. I think it’s a cool sounding name, just a shame that cats can’t prepare morning coffee.

Barra – Barra is a shortened name for a Barraquito (see next name). I thought it was a coffee-themed word that sounded cool on its own.

Barraquito – Also known simply as a ‘Barra’, ‘Quito’, and a ‘Zaperoco’, a Barraquito is a coffee liqueur. It’s a specialty on the holiday destination of Tenerife, I have it a few times and give it the thumbs up.

Bean – It all starts with coffee beans, the seeds of the coffee plant. I knew a cat called bean once, he was a chocolate Burmese. Not sure if he was named after a coffee bean, but it always felt like he was.

Biscotti – Also called ‘Cantucci’, these are the almond biscuits that traditionally accompany a cup of coffee. I’ve known cats called ‘biscuit’, so why not put an Italian coffee twist on it and name your kitten biscotti?

Blonde – A mellow coffee that has been lightly roasted for a distinctive and long-lasting flavor. Perfect for any blonde(ish) colored kitties!

Bombon – A Cafe Bombon is a type of coffee that used a 1:1 ratio of espresso and sweetened condensed milk. It’s really popular in Spain and packs quite a sweet punch.

Boston – I wouldn’t have a complete list without mentioning the Boston Tea Party political protest in 1773. The protest targeted the Tea Act, and as a result, coffee became a more popular drink stateside.

Brasil / Brazil – The country of Brazil produces more than 30% of the world’s coffee production.

Bucks – Half of the word ‘Starbucks’. I wouldn’t call a cat Starbucks, but you might. Bucks sounds a lot cooler in my opinion.

Buzz – We all get a buzz after drinking a coffee. It’s riding that caffeine buzz that makes coffee so appealing to most coffee drinkers.

Cafecito – A Cafecito or a ‘Cafe Cubano as it’s also called is a Cuban style of coffee. It’s a shot of espresso that’s been sweetened and provides an awesome kick to start the day.

Caffe Crema – A Caffe Crema is a long espresso drink most commonly consumed in some European countries, such as Switzerland, Austria, Italy, and Germany. It’s essentially an espresso.

Caffeine – The stimulant in coffee that gives us that ‘buzz’. The kick of energy, nerve settler, whatever you get from it, caffeine is what keeps on bringing most people back to the coffee pot.

Cantuccini – This is another name for Biscotti biscuits, as explained in the name Biscotti above.

Cappuccino – One of the most popular drinks on the menu, a cappuccino is an espresso-based drink prepared with steamed milk foam for that frothy look.

Caramel – Caramel is a fairly popular name for cats. It’s also a popular flavor of syrup that’s added to all kinds of coffee.

Chino – Chino is a shortened version of ‘Mochaccino’ and ‘Mocha’. A milky coffee with chocolate, hence the name. Perfect for any cats with brown and white coats.

Chocolate – I had to include chocolate. Choc and coffee are a marriage made in heaven, there are few better combinations.

Colombia – Colombia is third on the list for countries producing the most coffee behind Vietnam and Brazil. I like it as a cat name, sounds cool.

Cocoa – Cocoa beans is the name for the coffee beans that are ground down to make coffee. Also called ‘cacao’ if you prefer that spelling and sound.

Coffee – Well, it’s self-explanatory why this name is on the list. It’s a fairly popular name for cats, I’ve known at least two cats called Coffee before. Suits any cats with brown in their coats.

Cortado – A coffee that’s made with an equal amount of espresso and warm milk. The result, a smooth delivery of coffee and milk that tastes and feels great. A pretty smooth name for a kitten too.

Cuppa – Fancy a ‘cuppa’? A phrase heard around the world and makes for a good talking point when the name of a cat.

Doppio – A double espresso, so a name reserved for a kitten with double the energy and personality!

Drip – This might be loosely tied into the coffee theme, but I like is as a name for a little kitten. I added it to put it on your radar as a possible name.

Dunkin – If you’re a dunkin’ person when it comes to dipping biscuits into your drink, especially biscotti, this name might jump out as a winner.

Dutch – A Dutch coffee is brewed using cold water, not hot. I’ve tried it once, it wasn’t really to my liking. The name is steeped in the history of coffee though, and plenty of other people love it. So a cool name to consider.

Espressino – This is an interesting coffee. It’s made with cocoa powder on both the bottom and top of the drink, with espresso in the middle. A hit with the hardcore coffee lovers, and quite the kick with a strong taste.

Espresso – That small, yet so strong and potent drink. It’s made by forcing a small amount of almost boiling water through coffee beans that have been finely ground. Good name for a small kitty with a big personality.

Gabriel – Gabriel de Clieu was a young naval officer in 1723 and is the person responsible for introducing coffee to the French colonies and helping spread it across the world. If you’re a true coffee fan and enjoy the history of this fine drink, naming your cat after de Clieu is about as good as it gets.

Gaggia – This is the name, and one of the most well-known brands of coffee machines. You may have seen one, or even been served a drink made from one of their machines without even knowing it.

Java – Heard the saying, ‘a cup of java’? This is a cup of coffee. But why is it called java you say? Because in the 17th century, the Dutch colonized the island of Java where they played lots and lots of coffee.

Kona – Kona coffee is a highly prized coffee. Famed for its strong, full-bodied flavor and strong aroma that’s very pleasing on the senses. While you may not have tried a genuine Kona, as not many have, it’s a superb name for your kitty.

Kopi Susu – A milky coffee, Kopi Susu is how the Malaysians tend to serve up their coffee. As opposed to the thick, sweetened version we tend to drink.

Latte – The Caffe e Latte is one of the most popular choices in coffee shops across the county. It’s a simple coffee made with espresso and steamed milk. It has nice brown and white colors, perfect if you have a kitty with similar colors.

Liqueur Coffee – One of those of legal drinking age. A liqueur coffee is a mix of coffee and liqueur, just as the name suggests. A good name for a lively cat – or of course anyone who enjoys a tipple.

Lloyd – Lloyd’s Coffee House was a meeting place in the 17th and 18th centuries for sailors, merchants, and shipowners. You can probably guess what beverage was enjoyed and celebrated there.

Lungo – Lungo is the Italian word for ‘long’. It refers to a long drink made by making a black coffee with extra water and served up in a tall glass. An ideal name for a long slender cat.

Macho – Is a slang term for a coffee and protein mix. It’s a macho drink for people who want some extra protein in their diet to help build mass. It’s usually served chilled as a post-workout drink. A suitable name for a big old cat.

Maxwell – Maxwell House is one of if not the best-known brand of coffee in the states, and some other parts of the world.

Mocaccino – Also called Caffe Mocha, this chocolate flavored coffee hits the spot for coffee and chocolate lovers in one cup. The name actually comes from a city called Mocha in Yemen. Interesting, eh?

Mocha – See ‘Chino’ above, this is name has the same meaning.

Peaberry – This is a coffee berry that has not one seed, but two, Making it quite unique. So, an awesome name for a unique looking cat.

Penny – This is actually the name of our dog, so I tend to think it’s a great pet name. It’s also the name of the original coffee houses in London, UK. It was coined as a name because the first coffees cost just one English penny.

Red Tie – Black tie is a Thai iced tea. It comprises of black tea, orange blossom water, crushed tamarind, star anise, milk, sugar, and two shots of espresso. If you order it with just one shot of espresso, it becomes a ‘Red Tie.’

Ristretto – The word Ristretto sounds pretty cool for a pet. It’s a short shot of espresso but made with about half the water so it’s fairly strong.

Steep – A process used in preparing coffee, steeping is when ground coffee is given some time to boil in water to extract the flavor.

Thompson – Sir Benjamin Thompson is seen as royalty to coffee historians. He invented the coffee percolator, where would we be today without this man!

Valencia – A classic I used to pick up at Starbucks was the Mocha Valencia. It comprised of orange syrup, mocha syrup, espresso, and steamed milk. Delicious! A cool-sounding name for your cat too.

Vienna – Vienna coffee is a cream-based coffee drink. Personally, I love it. But I love adding cream to hot drinks. Do you know who else likes cream? Your cat, so it’s a great name for a kitty if you want a coffee-based undertone as a talking point.

Zorro – A Zorro is made when you mix a double espresso or a doppio with hot water to a 1:1 ratio.

I hope you found the name in this list of coffee names for cats. If you know you want to combine your love for coffee with naming your cat, the only difficulty is settling on one as there are so many cool names.

It’s not that unusual either. I’ve known a few cats named after coffee drinks over the years. In fact, there is a ‘mocha’ that lives a few doors down from me right now. I’ve never been offered in for a coffee though!

If you have any feedback, comments, or names you’d like to see added to the list, just drop me a note below. Thanks.

If you didn’t find a name and want to change verticals, check out: