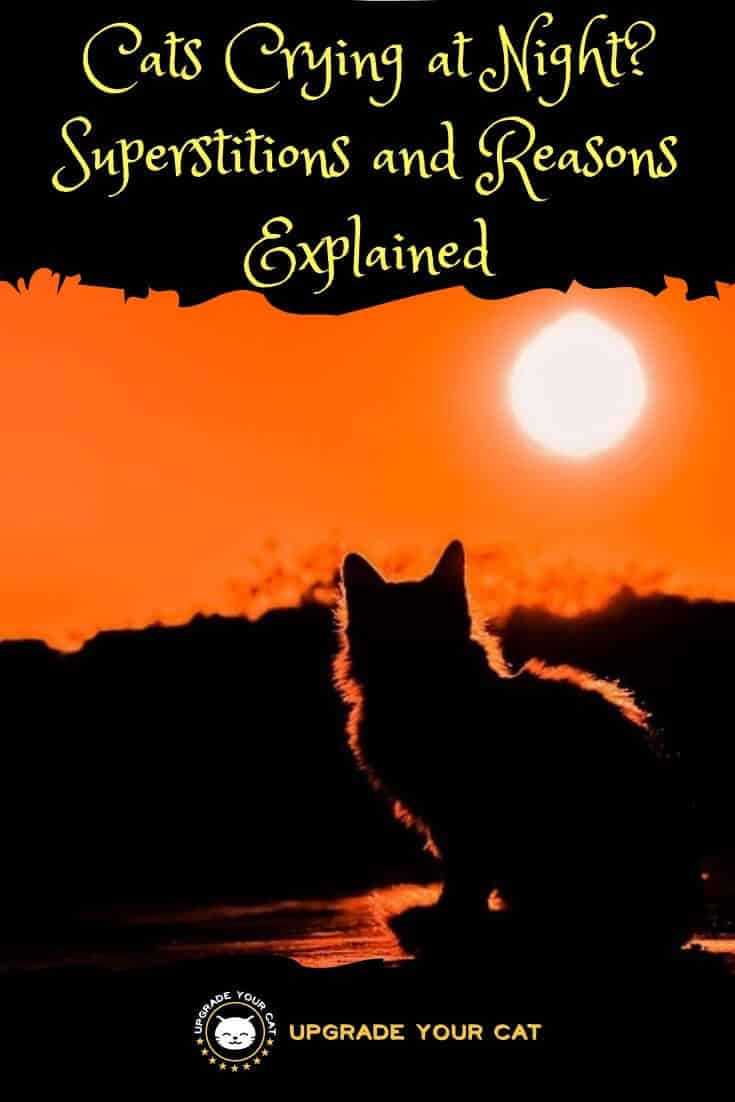 Wondering what the word is on cats crying at night superstition and reasoning?

Cats have found themselves caught up in all kinds of superstitions over the years. There’s even still a stigma around black cats crossing your path or following you in a lot of countries.

Part of the mystique behind cats is that they are so secretive and often loners. They don’t give away a lot when interacting with humans, although, they do need us emotionally as I’ve explained before.

If you’ve been hearing cats yowling, crying and whining at night for a while. Here are some of the spiritual and superstitious meanings behind this behavior:

The spiritual meanings surrounding cats run as deep as you’re willing to go. Some people believe angles manifest in the form of cats to bring messages, and this can be the reason behind the crying.

For the most part, people associate cats with Halloween, witches, and all things spooky. So, hearing a cat whining on a dark, rainy night can give you the spooks if you think too hard about it.

The overall beliefs do revolve around it being a bad omen, however, not a good one. If you’re into spirituality or superstitions, it may be something to be concerned about.

I do have some advice to help put you at ease, however:

In this article, I’m detailing some of the practical reasons why a cat may be making all that noise. Do some investigating and see if you can find out why it’s happening and the cat(s) responsible.

Other than that, all you can do is take extra care and attention when going about your day. If you think it symbolizes bad luck, do some of the things that are believed to stop bad luck. Such as praying, using incense, energy crystals, whatever you think works for you.

Why Do Cats Cry at Night? Superstitions and Practical Reasons

First of all, let’s explore some of the practical reasons why cats might be crying or yowling at night:

You may never have seen how two cats, particularly Tom cats behave when they are facing each other aggressively. There is often a standoffish phase, where the two cats size each other up and make loud noises.

These noises often sound like whining or crying. It’s a way they warn each other that it’s about to get serious. Cats will often do this at night when they are fighting over territory.

A few years back I had a stray cat living in a small forest area near my home. He used to cry and scream at night because he was hungry and wasn’t finding any decent food source.

A neighbor started leaving food out for him and the crying soon stopped. It caused another problem, however. He wouldn’t stop hanging around her house at night. If she didn’t put food out, he would cry and it would be even louder as he was nearer.

Another cause of noisy cats at night is the mating season. I’ve seen this a few times myself too. If there’s a female on heat outside, the male cats are going to be prowling and making a lot of noise.

If you want to take up the role of a responsible member of the community, try and find out if the cats involved can be spayed. There are too many stray and unwanted kittens and cats in the world already.

The yowling and screaming may be down to a cat in need of some help. It might be a physical problem, like an injury. Or, sometimes cats in mental distress can make noise.

Instead of being annoying by the yowling, try and find out the cat responsible. Take a good look up close if you can and see if there are any obvious signs that they need help.

Those are some of the practical reasons, and most are legitimate reasons I’ve experienced myself.

For the superstitious out there, or those who are interested in the superstitions and meaning behind cats crying at night, here are some possible meanings:

It’s believed that hearing cats meowing at night means there is some kind of bad news coming your way. This can be tied back to folklore dated thousands of years ago.

It’s reported that when some people heard cats crying at night they would be so certain they would be getting some bad luck they’d visit their spiritual leader in the morning.

Unfortunately, black cats have a long history of being blamed for bad luck. This can be traced back to medieval times when black cats were thought to be the devil and were actually hunted and killed.

From there, there have always been various superstitions around black cats following people or crossing their paths. In some countries, it’s considered to be really bad luck. Although, in some, it’s actually seen as good luck.

Either way, black cats have been the focus on superstition and mystical beliefs for a long time. It’s thought that if you hear a cat crying at night it’s a sign that you’re going to have some bad luck.

Another bit of folklore is that crying cats are warnings of evil spirits being present. Now, evil spirits can mean a number of things depending on what you believe personally. So don’t panic, it doesn’t mean something really bad, necessary.

I hope you enjoyed reading cats crying at night superstition and reasons and found the information useful.

As I said at the beginning, there is a wide range of reasons and beliefs as to why cats yowl at night. It depends on where your own beliefs lie as to what you think the reasons are.

If it’s annoying you, my advice is to try and find the cat responsible and do something about it. It’s not always easy, but it’s worth trying at the very least.