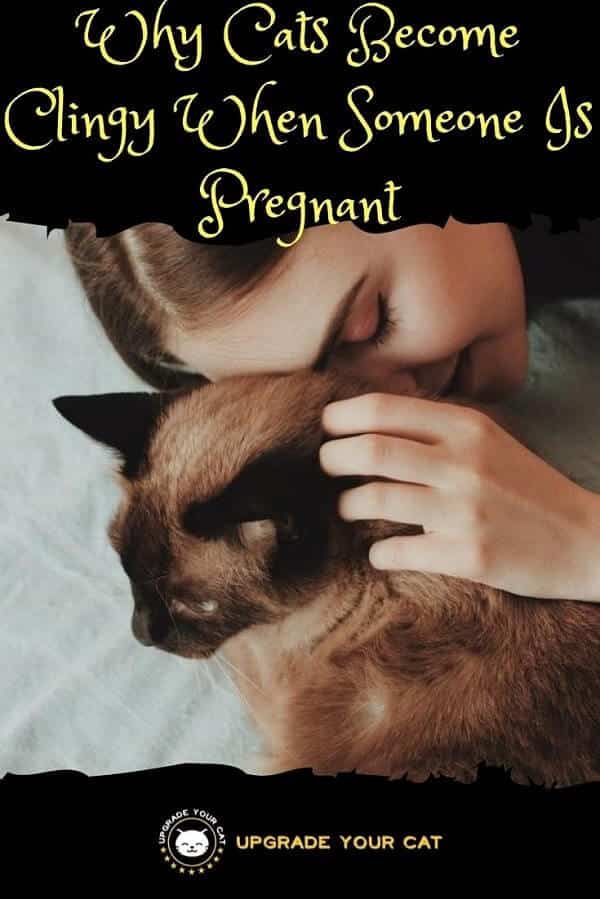 One of the more interesting old wives’ tales around cats and their sixth sense is whether or not they can tell when someone is pregnant.

Like most cat-related superpowers, it’s hard to validate and back up with science.

Yet, there is no end of anecdotal evidence that cats can sense things long before we can – such as pregnancy.

Before you rush for a pregnancy test because your cat has been stuck to you for the last few days, here’s what we know about cats and this phenomenon.

As I mentioned above, there isn’t a lot, if any (that I can find) of controlled studies into how cats behave around women when they’re pregnant.

But one thing we do know for sure, cat owners have been talking about this for a long as I can remember.

I even remember as a kid my mom told me the family cat started acting clingy when she was pregnant with me. So, it’s never been far from my thoughts.

Maybe that had some kind of influence on why I became such a cat lover!

Here’s a cute story about a cat that knew this cat mom was pregnant before she did. He wouldn’t leave her alone, would reach out and rest his paw on her bump, and his behavior changed dramatically:

As you will have seen, their cat was actually overgrooming and harming himself due to the anxiety of the pregnancy.

Interestingly, they said the cat went back to “normal” the day they bought home their new arrival.

Pretty clear evidence that this cat knew about the pregnancy before his owner did and that it caused some changes in this behavior.

How Can Cats Sense Pregnancy?

This is where it gets interesting. I’ve read thoughts and opinions from cat behavioral experts, vets, and cat owners, and it comes down to three main things:

They Can Sense Hormonal Changes

Cats have an incredible sense of smell, and it’s believed they can pick up on the hormonal changes a woman starts to go through from the beginning of her pregnancy.

In the first trimester, the production of estrogen and progesterone rises dramatically. A new hormone special to pregnancy starts to be produced too called gonadotropin.

Most vet’s agree that cats can smell or sense these hormones, which a woman will start producing before she notices any of the telltale signs that she’s pregnant.

Cat’s Are Drawn to Warmth

It’s no secret that cats are drawn to warmth. They’re experts at picking up on just a couple of degrees change, and they love body warmth.

According to LiveWell, pregnant women experience a rise in temperature. (Some readers will be better equipped to confirm or deny this than I am!)

Most cats are going to be drawn to a nice toasty spot of body heat. Much to the annoyance of a lot of women who don’t want to be stuck with a cat on or around them every time they sit or lie down.

They Pick up on Changes in Mood and Behavior

Ever noticed how your cat is fussier over you when you’re upset or tired? They are excellent body-language readers – when they want to be.

I do have to throw the caveat in that cats are also notorious for pleasing themselves and choosing when and who to pay attention to.

As I’m sure you’re well aware.

In the case of pregnancy, if you’re showing signs of being tired, feeling sick, or any change in behavior that comes with early stages of pregnancy, your feline friend will likely pick up on this.

Do Cats Get Clingy When You’re Pregnant?

Cats do get clingy around pregnant women, yes. This is one of the first signs that they’ve picked up on the changes you’re going through.

It’s both a blessing and an annoyance for most. Some women are really happy, especially if their cat didn’t pay them much attention before.

While others find it annoying, especially as their pregnancy progresses and they’re less comfortable and mobile.

Oh – and for those who welcome the extra affection, don’t forget not to get offended when your cat goes back to ignoring you when your baby is born.

This is completely normal. Not just because they are no longer attracted to all the smells and feelings that come with your pregnancy, but also the new addition to the home!

Related – How to keep a cat out of a bassinet.

How Do Cats Act When They Know Your Pregnant?

Has your cat been acting odd? Here are some of the typical behaviors cats display when they know a woman is pregnant:

Does any of the above sound familiar? How did your cat act when you were pregnant? I’d love to hear about it, just drop me a note below. Thanks.

Be Aware of Toxoplasmosis

This is because there is a risk – albeit a slim risk – of contracting an infection from a parasite called Toxoplasmosis gondii.

This parasite causes a disease called toxoplasmosis. There are various ways you can become infected, and soiled cat litter is one of them.

According to the Centers for Disease Control and Prevention, it’s estimated that more than 60 million people in the U.S. are infected.

Most will have mild flu-like symptoms if any at all. It can cause some serious health issues like blurred vision, mental impairment, and brain damage.

The reason why it’s a serious concern for pregnant women is that the parasite can infect their unborn child. The child can then have the symptoms listed above when they’re born.

So, you have a very good excuse not to be on litter box cleaning duties for around 10 months!

The profound effect pregnancy has on cats is one of those things that has been discussed and marveled at for as long as I can remember.

For me, it’s a wonderful thing. Seeing a cat acting so warmly and affectionate because they are able to “sense” that someone is pregnant is one of life’s miracles.

There’s no doubt it happens though!

If you have any personal experiences surrounding how your cat acted towards you or your partner while pregnant, please share them with the rest of the community

12 Things No One Expects During a Summer Pregnancy – LiveWell