Do Mice Eat Cat Litter? (How to Stop Them) 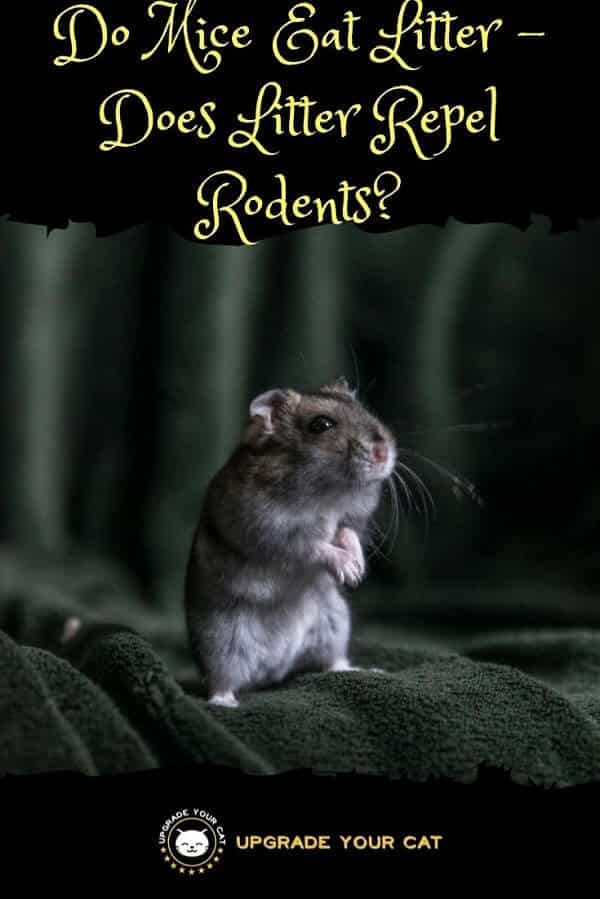 Mice do eat some kinds of cat litter, yes. Cat litter and mice go back a long way. Some litters attract mice more than others, and used cat litter is an age-old homemade mice repellent.

If you’ve spotted signs that mice have been eating kitty litter in your home you have a problem on your hands.

Hopefully, it’s not a huge problem. I don’t want to scare you, in most cases, it’s not that difficult to stop mice coming into your home.

It might be as simple as changing your cat litter!

First of all, in my experience mice only like most of the cat litters that use natural ingredients. Not the regular clay litters.

The issue with this is that natural litters are often the best on the market. So, as cat owners, we want to use them.

Some of the best brands of natural cat litters use ingredients like:

Pretty much all the stuff mice love. They would happily eat corn or wheat given the chance, and they also nibble on paper.

When you look at it like that, it’s no surprise that mice would eat some of that cat litter. The real surprise should be that you have mice in your home and you now need to do something about that.

If you’ve heard it said that cat litter repels mice, there is some truth to this rumor. I’ve not done this myself, but I spoke with a few cat owners who have before writing this.

It’s not so much the type of litter that repels them though. You have to use used cat litter as it’s the smell of cat urine that scares mice away.

Mice are pretty smart. Or, at the very least they have the smarts to survive in the wild. They will know from the smell of cat urine that they are in danger and turn the other way.

It’s not the nicest substance to work with, used cat litter. But it’s an inexpensive way to recycle waste.

Speaking with people who have used litter, they told me they would put it around the perimeter of their yards to ward off mice coming in.

If you have a persistent mouse problem, you could also switch to a clay litter. Clay litters are not as absorbent as natural litters, neither do they lock in odor as well – but mice are less likely to eat clay.

Does Cat Litter Keep Rats Away?

The same principle applies to rats as well as some other small rodents. If they smell cat urine in used litter there is a good chance it will repel them.

Rats are a different type of problem to mice though. They are not as likely to enter your cat’s litter box and eat litter, and they are a more serious issue to deal with.

How Do You Get Rid of Mice If You Have Cats?

If you have one or more cats, you have your own mobile pest control unit right there working for you day and night!

Well, not quite. (Most) cats will chase a mouse if they see one. But more often than not, mice are going to do what mice do – stay out of sight and go undetected.

Simply having a cat is enough to deter a lot of mice and rats, so it’s definitely an extra line of defense.

As I explained above, mice have a sensitive nose and will be fearful if they smell cats. But you may have to take some extra measures to get rid of those pesky mice.

You’ll have to use methods that are safe with cats in the home. You can’t just put out those old mouse traps that snap, or poisons where your cat can come across them.

Here are some of the best ways to get rid of mice that are safe to use around cats (other than using used cat litter):

The first thing anyone has to do when they find out mice are getting into their home is to seal up all possible entry points.

Those mice are getting into your home somehow. You need to find out how.

It’s not an easy task. Mice can squeeze in through holes that look much smaller than you’d think possible.

Cut off Their Food Source

Mice don’t enter your home to enjoy the decor, they’re after food. If they’ve found food, they’ll be back. If they never find food, there‘s a good chance they’ll start going elsewhere.

Even if that food source is your cat litter, you need to do something about it. Check around for other signs that mice have been in other rooms. Look for droppings, signs of munching, and so on.

Related – How long should you leave dry kibble out for?

Use Humane Traps Safe for Cats

Even if you’ve done both of the previous things, it’s a good idea to set up a humane trap to catch mice.

Otherwise, they might still be coming into your home and may start causing some serious damage. All it takes is a chewed wire to your AC unit or PC and it’s going to be a costly headache.

Here is the style of trap I like. It’s safe to use around cats too, which is an important consideration:

This is a 100% humane trap, which for me is important. I don’t want to kill the little critters, but I do want them as far away from my home as possible.

It’s simple to set up. All you need to do is put some bait inside – mice love peanut butter – and when the mouse enters the trap to get the bait the doors shuts behind them.

You can then take them far away from your home and release them into the wild somewhere both of you will be much happier.

Now you know why mice eat cat litter, the types of litter they like to eat, and how you can stop them from eating your kitty’s litter.

As well as how you can use some of your used litter to repel them from coming near or into your home.

Mice might look cute (to some), but they can do some serious damage, can carry disease, and can give you quite the freight if you catch them running across your bed!

Can You Put Two Cats in One Carrier? (Safety Warning)

A Look At Soft Cat Litter for Declawed Cats