Of all the habits that make me question my cat’s sanity, drinking out of the toilet is near the top of the list.

I mean, I know they don’t know it’s a toilet. They don’t know what it’s used for. But they have perfectly fresh water in their bowls!

So, why do cats drink out of the toilet?

Let’s be honest. Cats are pretty clean animals, and most are fussy about what they eat and drink. Yet it’s really common to catch your cat drinking out of the toilet.

If you’re reading this thinking you’ve never seen your cat doing this. You probably just haven’t caught them in the act!

Anyway, for those who do catch their cat drinking from their toilet and want to know why and what they can do to stop them – hopefully, this article has all the answers you’re looking for.

Why Do Cats Drink out of the Toilet? 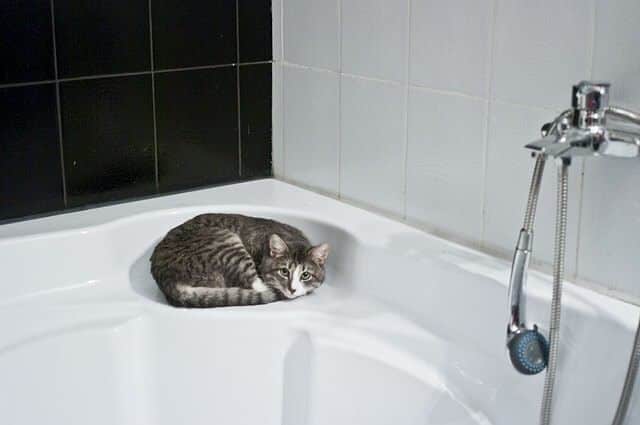 The Water Is Cool and Fresh (kind of)

Cats like drinking cool water, especially during the summer months. Toilet water is typically going to be cooler than their plastic or metal bowl.

It’s also going to taste fresher than the water in their bowl if the toilet was flushed recently. Fresh might not be the best word, but you know what I mean.

Cats are creatures of convenience. If your cat hangs out near the toilet they are likely to source water from there instead of finding their bowl.

Try putting a small bowl of water next to the toilet and keep the seat down to see if this makes a difference.

Fun for a Curious Kitty

I’m sure you’ll agree with me that cats get themselves into all kinds of predicaments due to their curious nature. Which is what would have led them to stick their head in the toilet in the first place.

Curious kitties will explore toilets. If they like having a little drink from it they will keep returning.

Is It Safe for Cats to Drink from the Toilet?

What do you think? Exactly, no. It’s not entirely safe for cats to drink from the toilet. There are loads of microorganisms breeding in a toilet that can cause a cat to get sick, or worse.

There is also the risk of your cat licking bleach and other cleaning products, which is a huge potential health risk.

Just think about this next time your cat is nuzzling up to you and being all cute, licking or nibbling on you – they may have just been drinking out of the toilet.

Can Cats Drown in Toilets?

This is another risk with allowing (or not stopping) your cat from drinking out of the toilet. It sounds very unlikely, and it is, but cats have drowned from slipping into toilets.

The inside of a toilet is slippy and gets narrower as it goes down. Once a cat slips in, it can be very difficult to turn around and almost impossible to get a good grip to get out.

Imagine if the seat drops down on top too as your cat is scrambling to try and stop themselves. It’s a terrifying thought!

Please keep toilets out of bounds for your cat. It’s just not worth the risk.

How to Stop Your Cat Drinking out of the Toilet 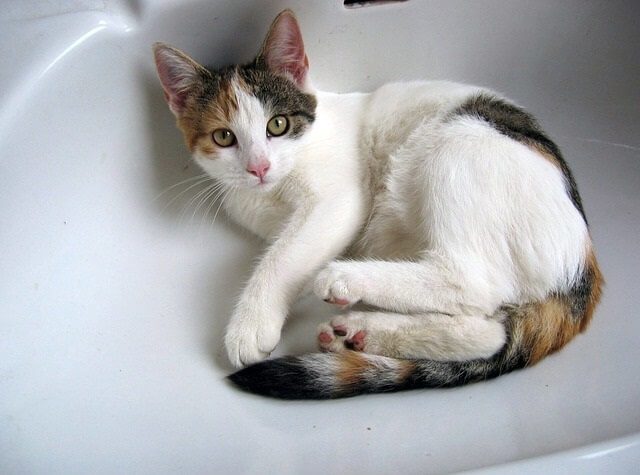 I think I’ve listed enough reasons why it’s a bad idea to let your cat drink from the toilet. The real question is how to stop them doing it – I can help you here:

Keep their water bowl topped and fresh – As I mentioned above, one of the main reasons why cats drink from the toilet is because the water smells fresh to them.

Put a water bowl in the bathroom – As I touched on above, some cats are lazy and use the toilet as its the closest water source to them.

Try putting a water bowl in the bathroom and closing the lid of the toilet to give them a better option without having to exert themselves and go all the way to their other bowl.

Keep the toilet seat closed – Cats haven’t evolved to the point where they can open toilet seats as far as I know. So keep the lid closed.

Put up a friendly notice for visitors, break your habit of leaving the seat up, and make it very clear to your cat that the inside of the bowl is out of bounds!

Cool their water – In the summer months most cats prefer cool water, and who can blame them?

If the water is a lot cooler in the toilet this might be one of the things attracting them. Drop some ice cubes in their bowl and see if this makes a difference.

If there is too much information to read through above I can summarize the topic of – why do cats drink out of the toilet?

The most common reasons cats drink from toilets are the convenience, because the water is cold, and it’s less stagnant than the water in their bowl.

To break this bad habit, start closing the toilet, providing more bowls of fresh water, and even cool it with ice cubes if you can.

It’s not a difficult behavior to change. At least, it’s not hard to stop cats drinking from the toilet as you can close the lid and the door to the bathroom.

It’s something worth doing though. As they can easily pick up harmful bacterias, get sick, and potentially drown!

Is this a problem you’ve encountered with any of your cats before? If you have any comments or feedback I’d love to hear it, just drop me a comment below. Thanks.