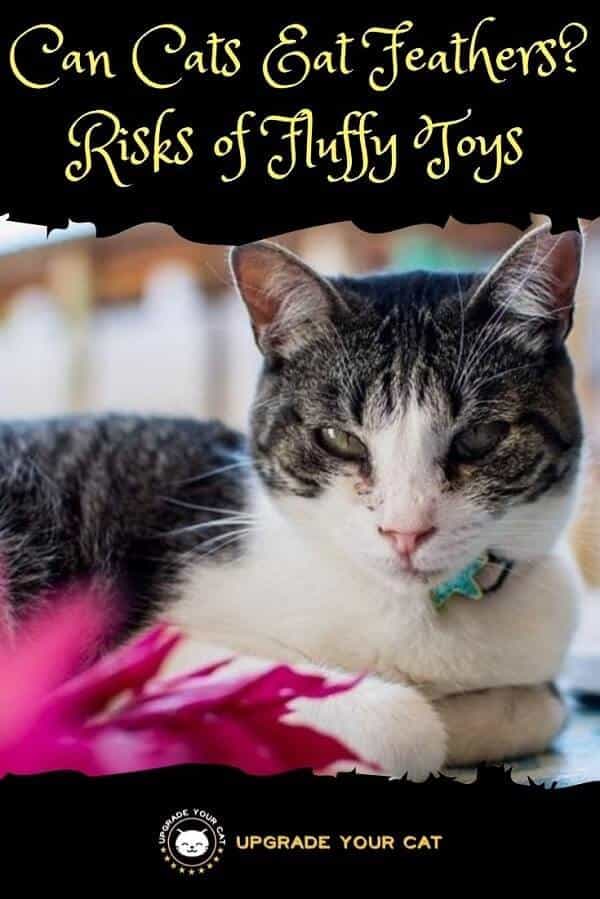 Cats will sometimes eat bits of feathers, either from the prey they’ve caught or from their toys. It’s not good for them as feathers can’t easily be digested, are potentially sharp, and can potentially cause intestinal issues.

The problem is, it’s not always possible to stop a cat chewing on feathers. All you can do is your best to ensure you stop them if you see them attempting to eat a feather.

Are Feathers Safe for Cats?

Generally speaking, feathers are safe for cats. This is why they’re used on so many of their toys.

Of course, not all toy feathers are real feathers. But some are. They’re used on toys because cats are attracted to feathers as it helps simulate hunting real prey.

Which, if you have an outdoor cat there is a good chance they will catch a bird at some point. They’ll almost certainly get a mouth full of feathers then, and as gross as it is, they’ll also very likely take a bite out of the bird.

Then there are wild or feral cats, they get their teeth into a lot of feathered prey. The point I’m trying to make is; cats and feathers go way back, they’re pretty safe.

There is always a small chance a piece of a feather will get stuck though. But you could say that about most things cats eat that they shouldn’t.

Related – Laser pointers are much safer and more fun for cats!

This is where the real issue with feathers lies as the barb (the spine) of feathers are made from a protein called beta-keratin.

This is basically the same stuff a bird’s beak and claws are made of, as well as reptile scales, and some other similar materials. They’re not designed to be eaten, and doing so can cause some problems.

A cat’s digestive system will not break down beta-keratin. This means it either has to pass through in relativity the same form, or be vomited back out.

Neither option is ideal, the better option is that your cat doesn’t eat some of a feather in the first palace.

I’ve heard of it being more of a problem for dogs than cats over the years. Not because dogs catch birds, more so because they are more likely to eat stuff they shouldn’t.

My Cat Ate a Bird Feather – Should I Be Worried?

If you know your cat has been chewing on a feather and has eaten some, I’d keep a close eye on them for at least the next 24-48 hours.

Cats tend to throw stuff up pretty quickly when their bodies realize they can’t or don’t want to digest it, so keep an eye out for a cleanup job.

Failing that, it’s very unlikely they will swallow large pieces, so it’s a matter of nature taking its course and them passing the bits of the feather in their stool.

I wouldn’t bother about keeping an eye out for it, it’s not that important. Just keep an eye on your cat’s general health.

The key indicators with cats are that they’re still eating and drinking. If a cat goes off their food, then you know something’s not right.

Most cats will spend a good deal of time licking the feathers on their toys (after they’ve killed it, of course).

Like most curious cat behaviors, we do our best to decode this behavior. For the most part, people think cats like to lick feathers because when they catch prey in the wild they’d lick it to get a taste and feel of the prey.

I’ve read some accounts stating they also do this to see if the feathers can be pulled out.

If your cat licks their feathered toys, don’t worry it’s not a weird or unusual behavior. It’s comforting for them – although it is one of the main causes for them swallowing the feathers!

Are Feather Toys Safe for Cats?

This is an interesting question. Obviously there are loads of cat toys with feathers on, as cats love these.

At the same time, some organizations are adamantly against them.

The RSPCA in Australia says that cat owners shouldn’t give their cats toys with feathers on or inside.

They say the main risk of feathers is that they can lacerate the inside of a cat’s mouth. I agree, this can certainly happen. Although I’ve never noticed it’s happened with my cats.

Generally speaking, I don’t think you should be overly concerned. When looking at cat toys, if there are loads of positive reviews don’t let feathers put you off.

Cats can get themselves into all kinds of trouble, as I’m sure you’re well aware. Feathers don’t need to be high on the list of priorities in my opinion.

In Summary – Can Cats Eat Feathers?

Cats do and can eat feathers sometimes, they certainly lick and chew on them a lot.

This does come with the potential of scratching the inside of their mouths as the barb of a feather can be sharp when broken.

Also, cats can’t digest or break down feathers properly as they’re made from a substance that’s too hard. This can cause them some issues in their digestive tract.

In short, keep an eye on your kitty if you think they’ve eaten any feathers. If it’s a concern, remove them from their toys and attach a bell to your cat’s collar to try and save the local birds.

An insider’s look at the feather – NationalGeographic.com