If you’ve never played with your cat using a laser pointer you’ve been missing out. Watching cats chase the little red dot has provided me with endless hours of fun – and some pretty decent exercise for my cats too.

I’ve put together a list of the 5 best laser pointers for cats to point (pun) you in the right direction to some of the safest, and best pointers for you and your kitty.

Is It Ok to Use a Laser Pointer with Cats?

I’ve heard mixed opinions from vets and pet behavior professionals over the years. It seems like there was more concerned initially when laser pointers were becoming popular, but now it’s accepted as a fun and safe way to play with your cat when done correctly.

There are two main areas of concern; one is that the laser can damage a cats eye if pointed directly into their eyes.

This can be true. So you should never let the laser go into their eyes. There are also safe laser pointers that use UV or other ways to generate the red dot than a powerful laser, however, so stick to these.

The other concern is that cats don’t ever get the satisfaction from catching the laser dot as it’s not physically there for them to grab.

I’ve seen some cats looking for the dot long after the pointer has been put away, and signs that they are frustrated at not catching anything, so this is a real effect.

Keep an eye on your cat’s body language to see how they are reacting. Give them some physical toys to grab at too while playing if it’s a concern.

What Do Cats Think a Laser Pointer Is? 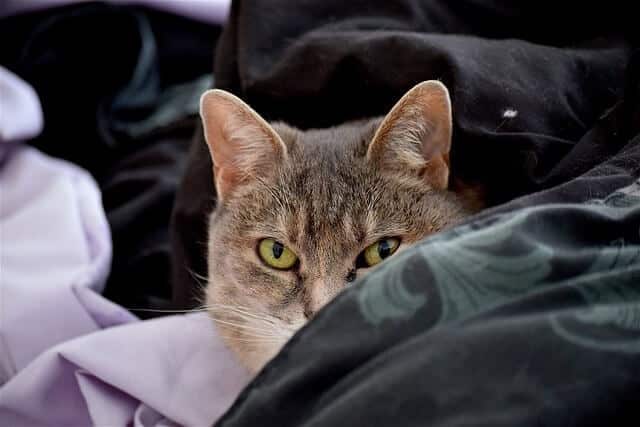 It’s hard to say exactly what cats think a laser pointer is. Cats are natural hunters though and seeing a dot mimic that of an insect or some other type of prey causes most cats to chase it.

If you’ve played with different cats you will see some respond to quicker movements, others need the dot to get close to them, and some will ignore it all together.

A lot of this comes down to a cat’s own personality and different cats are more interested in the dot than others. So, it’s likely some cats see it as some form of prey, while some so it as just something fun to chase.

Either way, there is no denying that most cats and kittens, in particular, find it incredibly difficult to resist chasing the dot from a laser pointer.

Are Laser Toys Safe for Cats?

As I mentioned above, there are different grades of lasers and some are more dangerous than others.

Stay away from the generic laser pointers that are intended for use in the workplace, or those that boast how powerful they are.

The ones I’ve recommended below are all designed for use with cats and aren’t harmful when used correctly. Some will not harm a cat’s eyes at all, which is great but you should never point it at their eyes anyway.

As long as you’re using it responsibly, giving your cat a good chase while avoiding having them running into things laser pointers are one of the best cat toys for hours of fun and laughs!

YSAGi 2-in-1 Laser Pointer for Cats with Flashlight

This is very similar to the first laser pointer I bought. It has a powerful laser and a flashlight, so you can use the dot to play with your cat, and I find the flashlight always comes in handy.

It’s a decent size, which I like as some are quite thin and fragile. It fits in the palm of your hand and is about the size of a chunky pen. So there’s no losing this down the side of the sofa or breaking it easily.

This pointer requires 1 x AA battery that’s not included in the pack, so if you don’t keep a few spares at home don’t forget to add one to your order. There’s literally no worse feeling than having something arrive and not having any batteries!

This is a more compact laser pen if you want something more convenient for hanging on your keys or just prefer smaller gadgets.

It’s a great value purchase, and the pointers are decent quality so certainly worth taking a closer look.

A feature that’s a huge winner with me is that it comes with 9 batteries and only requires 3 at a time. So that’s 6 spare batteries! It’s those small round ones too, so I doubt anyone would have had spares laying around.

FZR Rechargeable Laser Pointer for Cats with UV and Flashlight

This is a pointer for the gadget lovers. You can toggle between laser pointer, UV, and a flashlight, so it has more uses than just a cat toy.

Unlike the other pointers above, this one is rechargeable so no need to worry about keeping batteries in stock. You get two too!

The pointer is not a high-power laser, it’s described as more of an LED. Which is just as effective at producing a dot for your cat to chase, while not being harmful at all.

The seller says it takes about an hour and a half to fully charge, and when charged lasts for about 10,000 hours! That’s a long time and a lot of time spent chasing a dot by your kitty.

A friend of mine has this laser pen so I’ve used it and can confirm it’s a great pointer. It produces a strong dot, and it comes in a cool box if you’re buying one as a gift for someone.

It has an on/off switch, so no need to hold the button down and tire your finger out before your cat is done, and it’s really light and easy to use, so no complaints there.

It uses just one AA battery and lasts for ages. By ‘ages,’ I’m not sure how long but my friend says he’s used his for hundreds of hours and no sign of the light weakening yet.

Endless hours of fun for you and your cat await you with this pointer. An excellent gift for you, your cat, or someone else.

I couldn’t do a roundup of laser pointers / pens for cats without including this interactive cat laser tower in case anyone hasn’t seen one of these (or feel like being lazy).

On a serious note, it’s not just about being lazy. You can set this tower to produce a moving laser dot for your cat to chase while you’re doing something else.

This tower is an awesome cure for cat boredom too if you leave your cat home all day. It has a 15 minute shut off, so they can’t play in the day but you can flip it on when you’re home.

It uses 3 x AA batteries (not included so don’t forget to pick some up) and has three different speeds to keep cats interested and on their toes.

It looks like some kind of evil defense tower, but it’s an awesome interactive cat toy. Makes for a cool gift for someone too, check it out.

2 thoughts on “Best Laser Pointer for Cats: A Look at the Best and Safest Pointers”