Why Does My Cat Lick When I Scratch in Front of Her Tail? 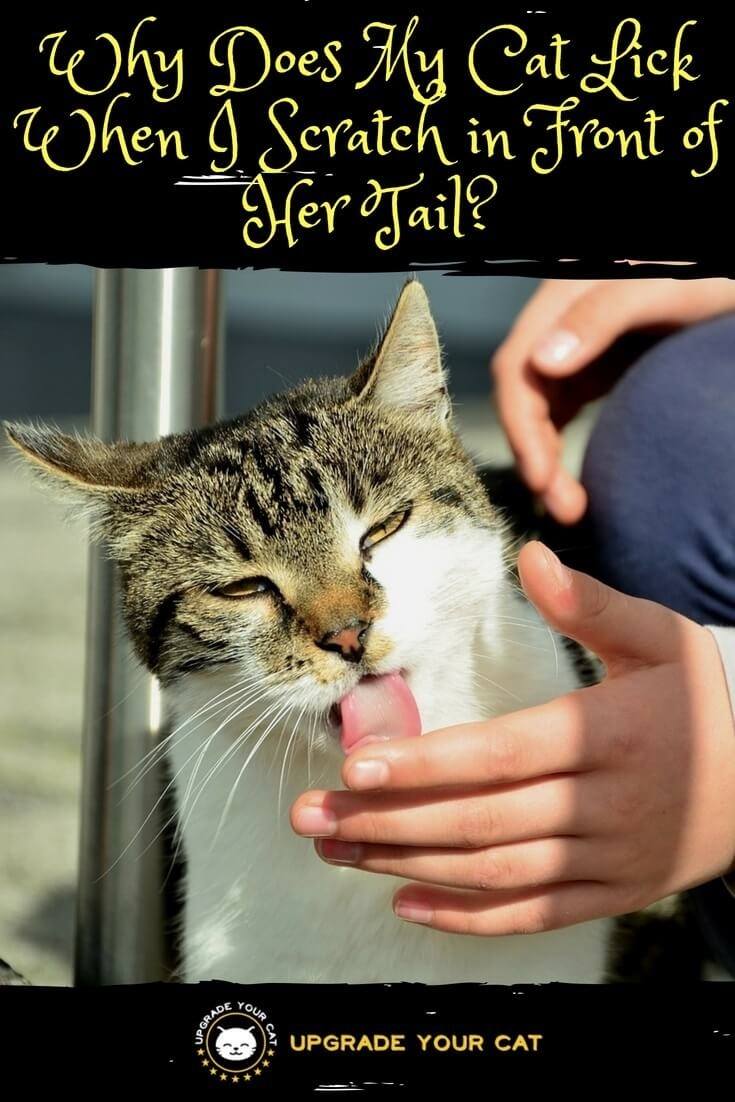 Want to know the answer to – why does my cat lick when I scratch in front of her tail?

This is one of those curious cat behaviors that almost all cats will do. I’ve never met a cat that wouldn’t start licking or acting strange when I fuss the base of their tail, I know that much.

If you’ve never tried it, give it a go. Just start scratching or fussing your cat on their back right at the base where it meets their tail.

Most cats will go crazy for this fussing. Some will lift their tails and arch their backs, some will start grooming themselves in a frenzy, some will lick you, others will roll around, it’s great.

Now, if your cat doesn’t seem to like it then obviously don’t keep trying. Maybe they are not in the mood or just don’t like it, even though that’s really rare.

But like I said, every cat I’ve known has loved a fuss at the base of their tail. So, why do they exhibit the behavior they do from this?

Here are a few of the most likely reasons for your cat’s behavior:

It’s a Spot They Can’t Reach

Cat’s are great at reaching all those hard to reach places, but this spot at the base of their tail is one of the hardest spots to reach.

I think overweight cats just can’t hit this spot at all. So you scratching it is going to provide some much-needed relief, and licking is an automatic response in appreciation.

We all know cat’s love fussing of almost all types, and almost anywhere. The feet, legs, and tummy are out of bounds for some, but they won’t say no to some extra fussing where they like it.

A lot of cats will groom themselves and lick themselves or something near them from other forms of fussing they enjoy. So it’s no different when you fuss the base of their tail.

Although I bet you can tell they enjoy it that bit more.

It Stimulates a Gland

Cat’s, and a lot of other mammals have a gland at the base of their tail called the supracaudal gland, or violet gland as it’s also called if you want an easier to remember name.

They use this gland to leave their scent on things and communicate with other cats. Fussing that area can stimulate this gland and be the reason for their behavior, especially lifting of their tails.

Should You Take Your Cat to a Vet for This Behavior?

Generally speaking, if your cat looks in good health and is behaving ‘normally’ outside of overreacting to you fussing the base of their tail, there is no need to take them to a vet.

It’s worth taking a moment to check their skin and fur at the base of their tail however. As this is an area they can’t easily reach themselves, cat’s can develop irritation there from a build-up of dirt.

So, Should You Scratch the Base of Their Tail If They Like It?

Everything is fine in moderation. I wouldn’t overdo it. I can appreciate it’s a cool thing to show people, and it’s fun seeing cats enjoying themselves- but there is too much of a good thing.

If you over fuss them at the base of their tail you’re going to overstimulate their supracaudal gland and probably end up irritating them.

But it’s a great way to bond with your cat and it’s fun seeing them enjoying themselves, so give them a little fuss on the front of their tail and watch them lick whatever is in front of them from time-to-time.