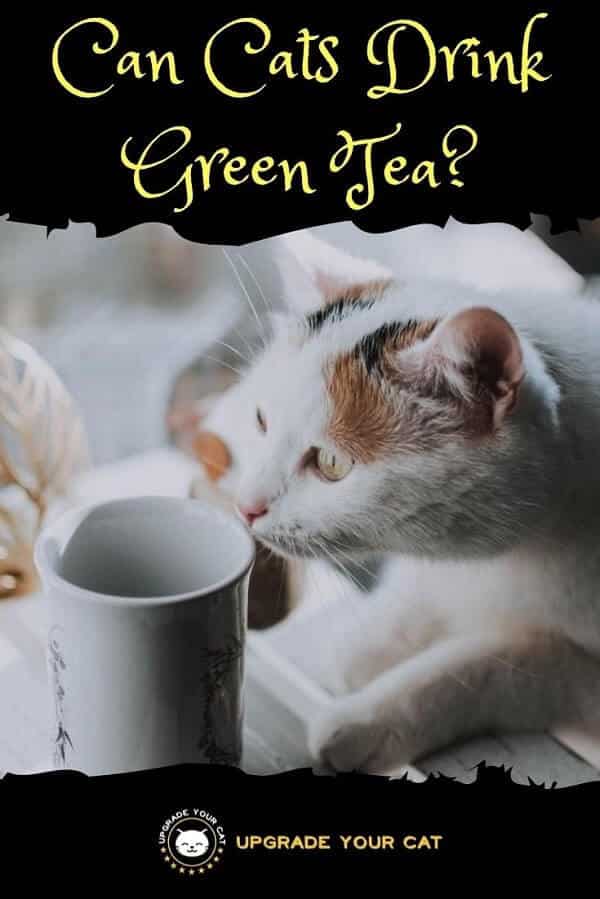 As strange as it may sound, cats can drink green tea – yes. Not only is it OK, but cats can also benefit from the compounds in what’s commonly called “one of the world’s healthiest drinks”.

As long as it’s caffeine-free and given in moderation, your kitty will be better for it. Here’s what you need to know:

Is Green Tea Healthy for Cats?

Giving cats a cup of tea isn’t something that usually comes to mind, I’ll admit. In fact, I’m very aware that caffeine is toxic to cats and other pets, so I’ve always made sure my cats don’t finish off my tea when I’m not looking.

That was until a friend of mine told me she was giving her cat a little caffeine-free green tea on occasion to give them a boost of natural antioxidants.

I was a little surprised, but I had heard about cats and green tea before.

So, I started doing some research on the topic. She is right (I never doubted her really, she’s super smart) cats can benefit from the healthy properties in green tea.

This is because – among other things – green tea contains natural antioxidant chemicals called polyphenols.

These chemicals provide anti-inflammatory and anti-carcinogenic qualities among other benefits.

It’s also known to help with brain function, which could be particularly helpful for senior cats.

Why Cats Should Not Consume Caffeine

Caffeine is a stimulant (that’s one of the main reasons we drink it, right?), but it’s far too powerful of a stimulant for small animals like cats.

Even a small amount of caffeine can cause an elevated heart rate, restlessness, vomiting, and hyperactivity.

Caffeine can also raise a cat’s blood pressure and cause cardiac arrhythmias. It really is a toxic substance to them, and something we have to be very careful about as cat owners.

It’s unclear just how much caffeine is bad for cats and will cause symptoms. Lapping up a little bit of tea probably isn’t going to be a problem.

But as with all toxic substances, it’s better to err on the side of caution where possible. While we’re on the topic, this is also why chocolate and coffee are toxic cats.

Related – Here’s why your cat should never drink soda.

How Much Caffeine Is in Green Tea?

The good is, green tea has a lot less caffeine than some other tea like black tea. If you’ve accidentally been letting you cat lap up small amounts of green tea, you probably don’t have anything to worry about.

It does still contain caffeine though, and now you know the risks you should only give your kitty decaffeinated green tea.

The problem is that the amount of caffeine can vary as much as 25-75 mg of caffeine in a cup of tea across various brands and types of tea.

In addition to this, even decaffeinated tea often has some caffeine. The leaves do undergo a process to remove most of the caffeine.

But by law, tea can be labeled “decaffeinated” as long as it contains less than 2.5% of its original caffeine content.

As I mentioned, it’s better to be safe than sorry. My advice is to pick up decaffeinated green tea, and still only let your cat have a little bit occasionally.

Should You Really Give Your Cat Green Tea?

There are arguments on both sides. Some cat owners like to be proactive and give their cats things like green tea once they know there are positive health benefits.

While others stick to the basics; fresh drinking water and quality cat food.

One thing for sure, feeding cats treats and sharing bits of our foods is always fun and a great way to bond with our feline friends.

I’m guilty of giving mine treats here and there like Spam, a little sausage, and other leftovers. As long as I know food isn’t toxic or harmful, like a lot of cat owners, I find it hard to turn them away!

I actually haven’t had green tea in a while. I used to drink a cup every evening, and after reading some of the benefits while researching this article I think I’ll be picking some up again in the near future.

So, there you have it – I’ve provided the facts around how safe green tea is for cats. I’ll leave it up to you to decide if you’re going to share a cuppa with your cat!

It’s a little unconventional giving cats tea, I’m happy to admit that. But my three cats love all teas and will help themselves in a blink of an eye.