Why Does My Cat Sleep in the Bathroom? (5 Reasons) 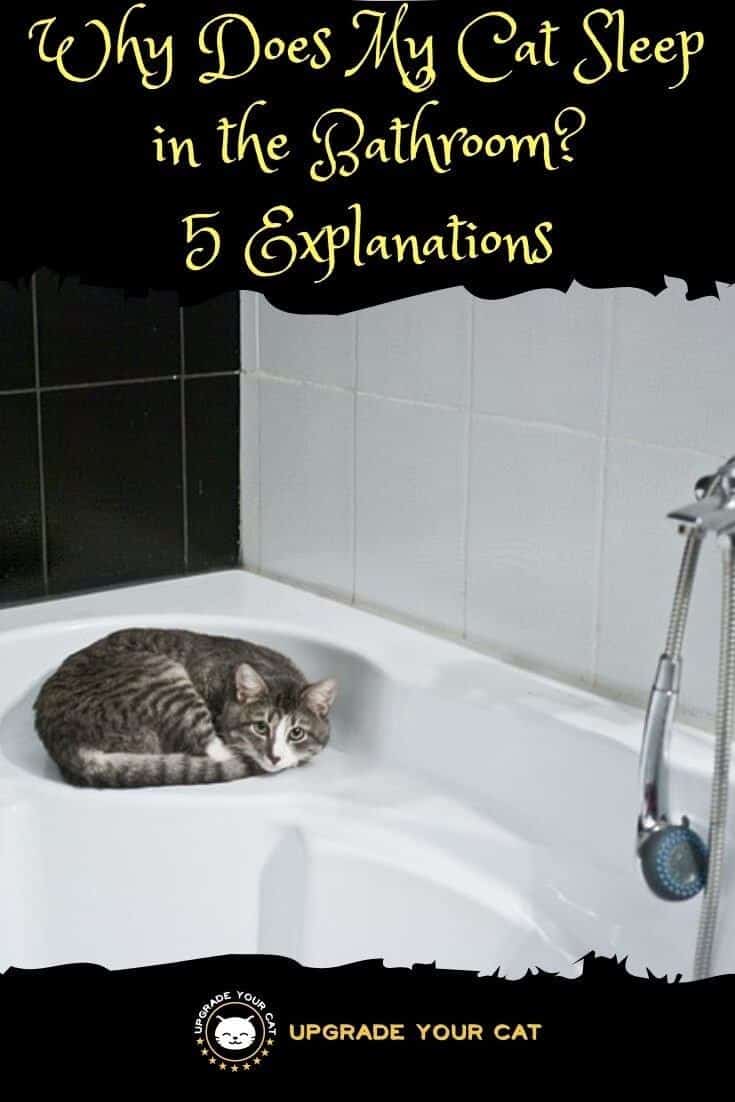 Generally speaking, cats love bathrooms. Both of my cats enjoy sleeping in our bathrooms, they’ll follow me in there, try to trip me on my way out, try to drink from taps and even the toilet, and get up to a whole host of other bathroom-related shenanigans.

In this article, however,  I’m looking at one question I know a lot of you ask yourselves from time to time as well –  why does my cat sleep in the bathroom?

There are a number of reasons why cats sleep in bathrooms as I’ll explain in this article.  From satisfying their curiosity to enjoying the feel of sleeping in the sink, and several reasons in between.

See which of the following most likely explain your cat’s behavior:

Why Does My Cat Sleep in the Bathroom? 5 Plausible Explanations

The Bathroom Is a Curious Place to Explore

Bathrooms are not very interesting to us. In fact, of all the rooms in our homes, I’m sure you’ll agree with me that the bathroom is one of the least interesting and where we spend the least time.

For cats, however, it’s a different story. It’s mainly because the bathroom door is often closed, closed the doors will pique the interest of the most docile cats. Cats by nature and out of habit like to check every room in the house daily. It’s part of their territorial routine.

This is one of the reasons that should they have the opportunity to spend as much time as they would like in the bathroom, they are probably going to take a nap in there.

Related: If you don’t want your cat shredding your toilet rolls, check out these cat proof toilet roll holder options.

Cats Are Attracted to the Sounds of Water

Despite not liking water for the most part, excluding drinking it, of course, most cats are very interested by the sound and feel of running water. I bet you’ve caught your cat drinking from a dripping tap on more than one occasion, it’s no coincidence they just can’t resist.

Despite not wanting to get wet outside, both of my cats will happily put their heads and paws underneath a running tap and play if I let them. One of my cats is very partial to licking the floor of the shower or the bathtub after it has been used too.

I draw the line at letting them drink out of the toilet though. That’s just gross, nobody wants to see that.

Sinks Are the Perfect Shape for Sleeping In

It’s no coincidence that the internet is full of cats sleeping in sinks memes. Cats enjoy sleeping in sinks, it’s really just a simple as that. Why? Because it’s comfortable, the number one reason why cats choose where to sleep.

The other reasons behind why cats choose a certain place to sleep include feeling secure, having good visibility over anything approaching, and being high up. All of which a sink checks off on.

My cats are getting quite old now so they rarely sleep in the sink. which is fine by me, as I never did like having to throw them out so I can brush my teeth. But for younger cats, it’s just a great place to sleep.

Let’s be honest, it’s hard being a cat. You get to spend most of your life lazing around and sleeping. Yet you want to be involved in where the action is so you don’t miss out on anything fun while having some peace and quiet.

We have two bathrooms in our house, one upstairs and one downstairs. We only use the upstairs bathroom first thing in the morning and last thing at night. One of my cats spends most of her day sleeping in there, usually in the bathtub. So, I’m fairly certain it’s to enjoy the peace and quiet.

This is because we will go up and down the stairs to various rooms and run around doing some other things. But rarely use the bathroom during the day. In fact, I make a point not to if I know she’s in there. So her mind tricks are working on that front.

For all of the cat psychology and study of their behaviors that go into trying to figure out why cats do certain things, sometimes their actions just tie back to who they are and their individual personalities.

Cats to have their own personalities and an air of mystery about them. It’s one of the things most cat owners love about their pets, I know it’s true in my case.

If I think back over all the cats I’ve had over the years, I’d say about half of them have been habitual bathroom sleepers. So, while some of the above reasons played a part in why they slept in my bathrooms, maybe the underlying reason it’s just that they wanted to.

In Summary – Why Cats like to Sleep in Bathrooms

If you looking to pinpoint the reason why your cat likes to sleep in the bathroom it comes down to 5 main reasons:

I hope this article has helped shed some light on the topic of cats and bathrooms, and more specifically why they like to sleep in them.

If you have any stories or theories on the topic I’d love to hear about it. Just drop me a comment below, thanks.