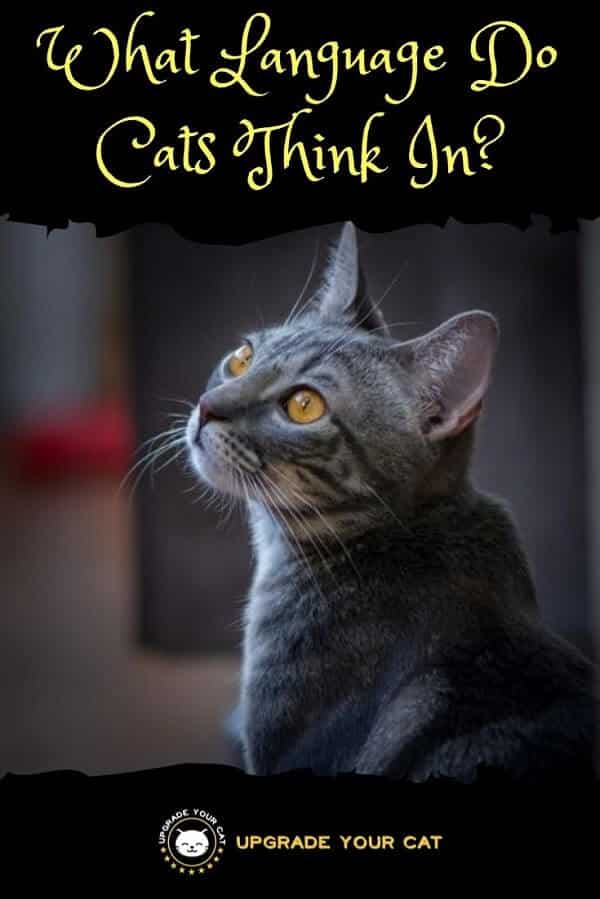 Cats are interesting animals. They are known for being loners, self-sufficient, distant, and mysterious at times.

I think I speak on behalf of all cat owners when I say that we often wonder what our cats are thinking.

Which brings up an interesting thought – what language do cats think in?

Do they think in meows? Or, do their thoughts comprise of words and sounds they are familiar with us using?

To delve into this we need to look at how a cat’s brain works, how they communicate, and more:

How Intelligent Are Cats?

There are many ways we can evaluate how “smart,” cats are. Plus, some cat breeds are clearly smarter than others.

However, cats are generally looked at as being pretty smart. Of course, the debate between cat and dog owners over which species is more intelligent has always been popular.

Dog owners argue that because dogs are easier to train, they must be smarter. While cat owners state that because cats are more adept at fending for themselves and are less reliant on us, they’re smarter.

The reality is, it’s hard to compare the two and state that one species is clearly smarter than the other.

Studies have shown that cats are great problem solvers. They also communicate with us and other cats through a number of methods; like scents, vocal noises, touching, posture, and some other body language.

What Language Do Cats Understand?

This is an interesting question and gives us some insight into what language cats also think in.

According to PetCareRx, cats learn their names, and some of the other words we use to communicate with them on a regular basis.

They also instinctively know how to communicate with other cats through the various ways I mentioned above.

So, this means they understand whatever language you speak – as well as cats’ languages.

What Language Do Cats Think In?

I’ve read numerous studies and theories on this topic, and most agree more research is needed to know the answer for sure.

But it’s widely believed that cats think in both “meows”, just as they use to communicate with, as also the words and sounds we use.

So, it’s believed that cats actually think in the language you speak. You could even call them bilingual, as they talk human and cat languages.

How’s that for a smart kitty!

What Do Cats Think About?

This is one of the questions cat owners and animal behavioral therapists ask themselves all the time.

The truth is, no one really knows for sure.

There is no way of knowing. Just as there is no way to know for sure what you or someone else is thinking (at least not 100% for sure).

We can take a pretty good guess though. At certain times of the day or when certain things are happening, it can be pretty obvious.

As cat owners, I think we all know that cats spend a lot of time thinking about food!

We can joke about it, but it’s true. Especially if you shake their food container or head in the direction of their food bowl. You know their thoughts are shifting to, “yay, it’s food time”.

But what about when they’re staring out of the window? Or staring at you?

I wish I knew!

We do know that something is going on in their brains. The cerebral cortex, which is the part of the brain that governs higher functions of rational thought is fairly developed in cats.

Obviously they are not on our level of rational thinking and decision-making. Which is probably a good thing, else they’d be calling shots around the home.

For now, however, all we can do is wonder and guess at what our cats are thinking about. Which does add to the wonderfully curious and mysterious allure that cats already have going for them.

I hope this part-scientific, part-guesswork look at what language cats think in and what they think about has helped give you a little more insight into what your cat is thinking.

We do know that our cats are very alert and in touch with us on an emotional level and perfectly capable of communicating with us in a way that makes sense to them.

So, it’s really not a stretch to assume that cats are thinking in the same language that they are communicating with us on a daily basis.