What Do Cats Think about Humans? 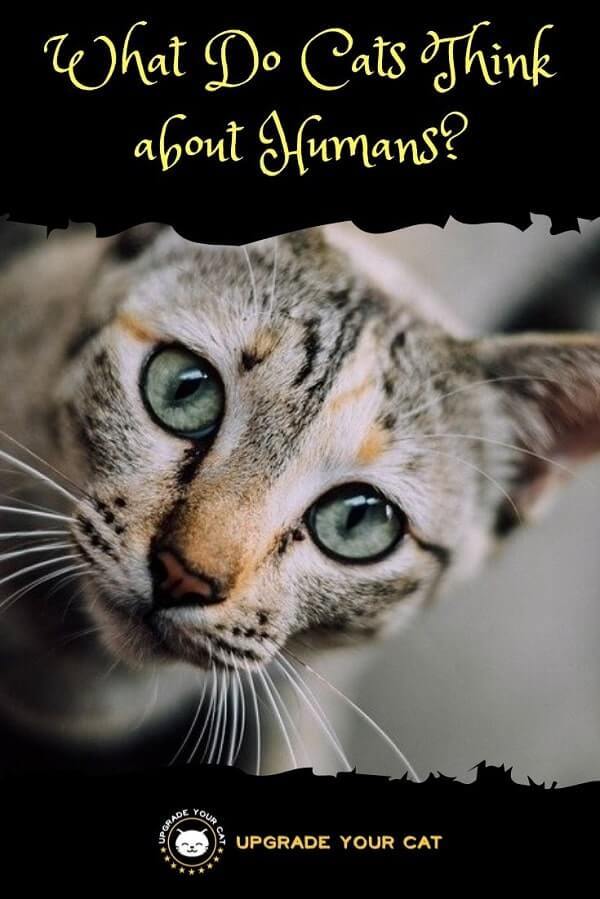 In the UK there is a cat is around 18% of all homes, with an estimated 7.9 million of these lovely felines gracing us with their presence. It’s a staggering number if you stop to think about it.

Yet for all the joy they bring us as owners, a lot of owners do question what their cat really thinks about them. We have all heard the stories of cats moving on to another home after years of dedicated attention from their owners. It happens. You may have experienced you cat abandoning you.

So how can we understand cats better, and what do they really think of us? As owners, are we just an easy source of food and a warm place to stay? Or do we form a bond of trust, devotion, and share a mutual respect?

There is a wealth of information on cat behavior. The interesting thing to keep in mind is that it’s still an ever evolving study. New bits of information are formed all the time as we try to figure out these complicated animals.

I have looked into in-depth studies between people and cats. There has been a number of recent studies looking at how people interact with their cats, and how their cats respond. This is then compared with how cats interact with other cats in a more natural, wild environment. I like these comparisons, it shows how their behaviour differs between humans and other cats, there are a lot of conclusions we can draw from this.

Here is some of the results of such studies summarized:

People are always quick to compare cats with dogs. As two of the most popular household pets it’s been a long-standing argument. But these are two very different species, both with their own personalities, and both very different.

For example, studies have shown that cats change their behavior very little when they interact with humans as opposed to other cats. While dogs see a dramatic change, becoming much more attentive and excited around humans.

Obviously cats are aware of humans and cats, and the differences in size and behavior from us. But they still behave very similar. Such as holding their tails high as a greeting, rubbing around our legs, and even doing a spot of grooming on us sometimes as they would another cat.

It was also highlighted that cats think of humans as larger counterparts, not as a pack mentality with an alpha as a dog would. This goes a long way to explaining why they often seem to use us for food and comfort, without that idolisation that a dog often shows its owner.

Something owners are usually blissfully unaware of is how stressful life can be for a cat around the home. There are a number of things both visible, and invisible can be causing the pet stress.

For example, more than one cat sharing a living space can cause some serious issues. There are a lot of territorial issues with cats, and this can simmer for a while before hitting boiling point.

Research has also shown that there are more cases of stress related health issues than ever before. Patchy fur, skin conditions, and cystitis affect cats that are stressed. It’s not always obvious by their behavior, so these are signs you need to look out for as an owner.

Cats behave differently towards different people. If you have a household with several people, you will have likely noticed this yourself. It’s believed this is because cats are a lot smarter than most give them credit for.

They read the signs that people give off, and interrupt them in a way to suit themselves. They are great at being close to the hand that feeds them, and will often keep their distance against someone who doesn’t care for them.

Can I Train My Cat?

This is another question commonly asked, and a question research has tried to answer. There is a lot of evidence to show that cats can be trained. Although you will not have your cat rolling or sitting on command, you can train them to not do certain things.

Such as jumping on the kitchen side, a problem in the lives of a lot of cat owners. The treat angle doesn’t work as well as it does with dogs. Cats respond to loud sudden noises. So clap your hands or startle your cat if you find it on the kitchen side.

This isn’t as harsh as it sounds, and your cat will soon associate being on the kitchen side with a being suddenly startled – and think twice in future. Make sure you also show your cat appreciation when it’s doing things right. They have a good memory you know.

Browsing studies on cat behavior shows a few contestant factors. Namely that cats see us as larger cats, treating us similar to their counter parts. Cats are social and loyal animals, but only to a certain point.

It’s not fair to compare them to dogs, there are too many fundamental differences. The dog or cat debate should be put to one side. Cats bring their own unique personality to a home, and I wouldn’t change a single thing about them.