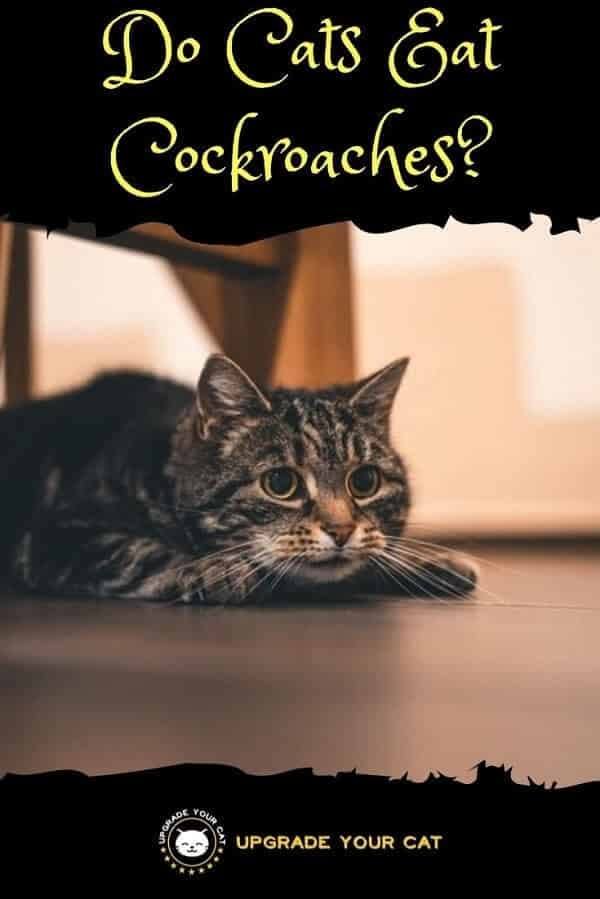 Cats can and do eat cockroaches on occasion, yes. Roaches are not considered to be toxic or harmful, but I think we can both agree it’s not a habit we should encourage.

Cats have been used as a form of pest control for centuries. Most cats will enjoy chasing and hunting roaches, they are the perfect size, speed, and will provide them some entertainment.

That depends on what you call “effective”. Can a cat catch a cockroach if it wants to? Almost certainly, yes.

Will most cats end up practicing their hunting skills and playing with roaches more so than catching and eating them – almost certainly, yes.

If you had the idea of using cats to get your roach problem under control, it’s not a good idea.

You’ve probably seen or heard of cats being used on farms to keep the mouse population under control, but this is a very different circumstance.

Cats are more effective at catching mice on farms because there is so much more room and open space for them to work with. Plus, mice are bigger and more obvious hunting prey.

Roaches indoors is another story. You’re going to be much better off going down the usual route of using roach traps or calling out a pest control company.

Related – Check out these posts about cats eating centipedes, slugs, and more.

What Happens When a Cat Eats a Cockroach?

Cats do eat insects like roaches, and sometimes it doesn’t agree with them.

Considering how gross it is, it’s never really a surprise to me when one of my cats is retching after eating a creepy crawly.

If your cat throws up, vomits, retches, or shows any other similar symptoms it’s a good idea to keep an eye on them.

It’s most likely going to be due to one or more of the following:

The Roach Was Too Big or Too Hard

It’s pretty gross just thinking about this in detail, isn’t it? But a cockroach has a hard shell and exoskeleton that I can only imagine is hard to swallow and digest.

Cats, much like most animals have the ability to throw stuff up pretty quickly if they think it’s going to be too hard to digest or cause them problems.

You know what they say; it’s better out than in.

They Are Experiencing Gastrointestinal Issues

As cat owners, it’s not going to be the first time you’ve had to clean up after your cat had some gastro issues from eating something they shouldn’t have.

When cats eat something they’re not used to eating, it’s not uncommon for them to have some issues.

If your cat vomits it’s crucial you know they drink some water within the next 24 hours to stay hydrated. If not, it’s best you call a vet to be on the safe side.

This is where there is a potential problem, although it’s not often a serious problem. Eating a cockroach that has come into contact with poison can cause your kitty some gastrointestinal issues (GI).

I’ve done some research into the topic, and the risk is small so try not to worry even if you think your cat or dog has come into contact with the trap.

The chemicals that are effective at killing roaches are; boric acid, hydramethylnon, and fipronil. These can be harmful to other pets, but it would need to be a much larger does than a trap contains.

Still, I’d look into pet-safe solutions. A couple of methods I’ve had success with and recommend looking into are:

Sticky traps – because you can place these somewhere your cat will not get their paws on.

The best thing about these types of traps is that they trap the roach. They don’t allow them to pick up poison and come into contact with your cat or surfaces you’ll touch.

You can check out the Roach Motel on Amazon via the link below:

It’s effective at killing roaches, and it’s a natural product that’s safe for use around cats (and us, dogs, and other household pets.

It has to be food grade though. You can check out the Harris brand I use on Amazon via the link below:

There are also some homemade remedies using products that are safe for cats. But to be honest, I’ve never found something that was as effective as the two options above.

Roaches are capable of carrying parasites and a number of diseases that can cause both us and our pets some health issues.

They are not direct vectors of disease like mosquitos and other insects that bite. It’s from coming into contact with items that they’ve contaminated, or eating them that causes contamination.

They can carry some serious diseases like salmonella, E.coli, cholera, and dysentery. As well as a parasitic worm larvae that can take up residence in your kitties insides.

More often than not a cat will display symptoms of gastrointestinal issues, which isn’t really a surprise. It’s worth getting them checked out by a vet if they’re displaying symptoms for more than 24 hours though.

In Summary – Do Cats Eat Cockroaches?

Cats will hunt, play with, and eat cockroaches sometimes yes.

No matter how domesticated and cute our feline friends are, sometimes we get these reminders that they aren’t far removed from their wild cousins.

Hopefully, I’ve helped put your mind at ease a little about the possible dangers of eating roaches. As well as some useful (and more effective) tips to help you rid your home of these pests.