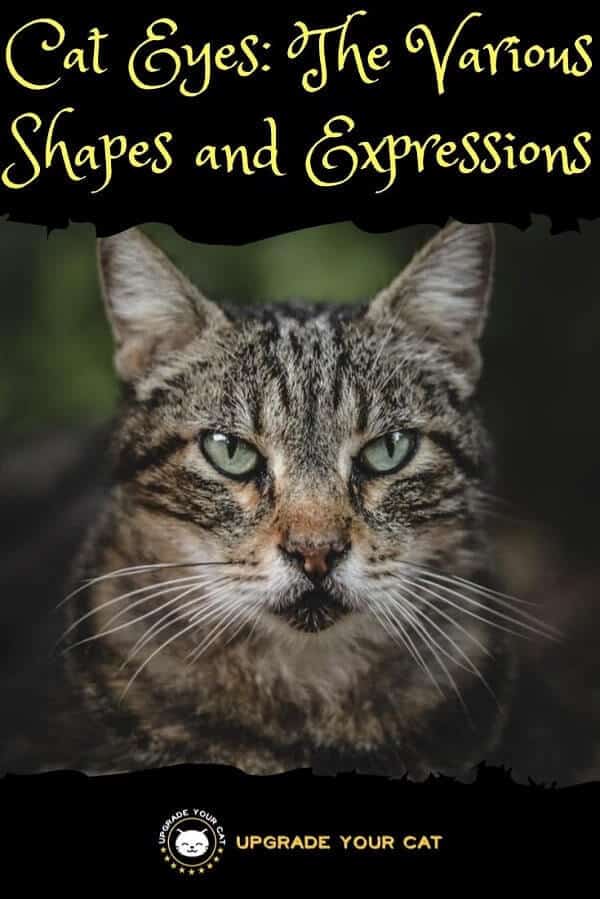 Cats do a lot of their communicating through their eyes. From slow blinking to death stares, there’s a lot you can tell about your cat’s mood, temperament, and health by looking at their eyes.

In this article, I’m going to explain what some of the different cat eye shapes, types, sizes, and looks mean:

The pupil is the black part in the middle of the eye. For us, it’s always around, and our pupils dilate or widen to allow more light in.

A cat’s pupil changes in shape completely from a vertical slit, to a big round shape – it’s quite fascinating how drastically different they look depending on the shape of their pupils.

A cat’s pupils will widen and become large and round when they’re in a dimly lit area. This is normal for eyes, it’s how an eye lets more light in to see better.

When it’s not due to lighting, however, it usually means a cat is in a high state of excitement or fear.

Two very different emotions, but both evoke this same response. So, it’s important you tread carefully to find out what mood your cat is in when they’re looking at you all wide-eyed.

If a cat looks at direct sunlight their pupils will naturally narrow to reduce the amount of light they’re letting in, just as we do.

If it’s not due to light stimulation, however, when a cat’s eyes are narrow it generally means they’re aroused in some way.

This could mean pleasure, fear, anger, some kind of emotional arousal that’s stimulating a response.

The most common reason I see this with my cats is when they’re playing with catnip or some other stimulant. If it happens while you’re fussing them, that’s a definite sign they are enjoying it.

Related – Ever wondered if cats have eyelashes or eyebrows — read those posts.

As I mentioned earlier, cats do a lot of communicating with their eyes. Not just their pupils, but how they are looking at you, whether they are staring, blinking, and so on.

If a cat does a slow blink while staring at you it’s generally believed they are showing you some affection. And I have to say I agree with this.

While it might not mean they love you directly, it’s a sign that they are really comfortable and happy at that moment, that’s for sure.

If you want to try and communicate on their level, do the same back. It’s one of those special moments between cat and cat owner.

If your kitty has that wide-open eye stare, it usually means they are alert and focusing on something.

Take a look at their line of sight, can you see something that might get their attention? This is a common occurrence in our home as birds often sit on the fence outside our window.

Cats don’t let their guard down unless they’re really comfortable and feel secure with their surroundings.

There are subtle things domestic cats do that tie back to their wild ancestors. Such as sleeping up high or somewhere with visibility of entry points to a room that helps them feel safe.

If your cat is allowing their eyes to close right in front of you they’re nice and comfortable and ready to take a snooze.

Staring is common between two tomcats on the street trying to establish who owns the territory they’re both frequenting.

It can be a sign of aggression, it’s also just something cats do with their owners to establish some dominance.

A word of advice – don’t try to outstare your cat. Not only do they see this as a form of aggression and not like it, but you’re also not going to win if they don’t want to blink, trust me.

Cats have a third eyelid, known as a nictitating membrane. A lot of animals have one, it’s a way they can protect and clean their eyes without being able to use their hands as we can.

If you can see your cat’s third eyelid all the time, this is almost certainly a sign that there is an underlying health issue.

As you can see, there’s a lot more to read into behind what your cat is thinking by looking at their eyes.

Admittedly, it often is that!

But, without being able to vocalize as well as we can, cats use their eyes as a way to communicate all other kinds of things.

Next time you look across the room at your cat, take a good look at their eyes. What do you see?