Do Cats Have Eyelashes? (No, Here’s Why) 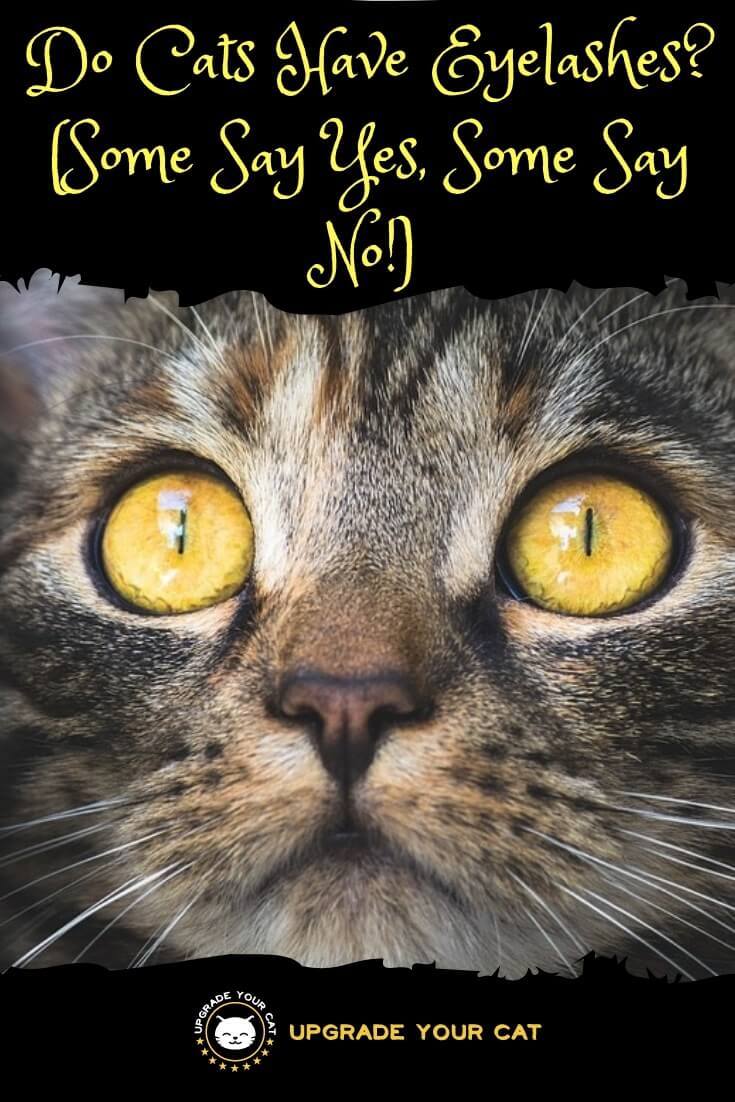 A question that’s hotly debated among cat owners is…. do cats have eyelashes?

That’s right. Of all the kitty-related questions, this one comes up a lot.

And, I’m guessing that if you’ve landed here, you’re looking for a definitive answer to this question too. Right?

The problem is, there is no definitive answer. Not from an anatomical viewpoint, neither by taking a close look at your cat’s eyes now for an answer. Because some cat owners are 100% certain their cat has eyelashes, while some people say they don’t.

Why Do We Have Eyelashes?

Let’s start with the basics and what we’re looking for. Eyelashes are long hairs that are attached to our eyelids. They very obviously stick out above and below our eyes, curving away slightly from being straight or into our eyes.

In many cultures, long eyelashes are considered to make a person more attractive. As a result, some women spend a good deal of time and money enhancing, even extending their eyelashes.

From a practical viewpoint, lashes have a couple of important functions. Firstly, they help protect our delicate eyes from dust and debris getting into our eyes and causing harm. Secondly, they are highly sensitive, much like cat whiskers, and warn us when something is going to touch our eyes.

So, while they might just be seen as something of beauty for some. Much like other bodyparts, eyelashes are performing an important role in keeping us healthy and happy.

Another interesting point on this topic – Do cats have eyebrows?

So, Do Cats Have Eyelashes?

Lashes are hair, so they can be found on other mammals. Camel’s, for example, have really long eyelashes. Horses and cows also have very obvious eyelashes. But when I look at cats, I definitely do not see what I can call eyelashes.

There are no obvious strands of hair sticking out the way lashes do. Even on long-haired cats with a lot of hair around their eyes, I don’t see the types of hairs that I would call lashes.

Some cats do have thicker hair that sweeps around their eyes, I will say that. They also have some whiskers above their eyes. While whiskers help cats judge distance and know when objects are close, they don’t help stop debris from getting into their eyes as lashes do.

I’ve seen some people calling these whiskers lashes, but they are not. As I pointed out, lashes stop bits of dirt and debris getting into the eyes. Having whiskers high up above the eyebrow area isn’t going to help with this.

Well, evolution would suggest that they do not need eyelashes if they do not have any. At least, not the large kind of lashes we have. Cats do get eye infections, so it’s not like they are immune, but it’s not due to not having any lashes.

Cats actually have what’s called a ‘third eyelid’ or a nictitating membrane as it’s referred to medically. This is a white-ish color lid that covers their eyes beneath their outer eyelids, protecting their cornea.

You may have seen this when your cat blinks or have their eyes half-open while sleeping. It looks like a white layer of skin and starts in the corner of their eyes. Lots of mammals have third eyelids, such as dogs, reptiles, birds, fish, and more.

Their third eyelid helps protect against scratches while fighting, washes away dirt and debris when they blink, and anything else that threatens to scratch or damage the surface of their eyes.

That’s another reason why cats don’t have eyelashes. They have other ways of protecting their eyes.

Cats do have hair around their eyes, and long-haired cats might look like they have eyelashes. But cats do not have eyelashes. At least not in the same form that we do, or any of the other mammals that do have lashes.

Despite what you may have seen portrayed on TV and in images, female cats can not be identified by having longer eyelashes than males.

If you want to know what a cat would look like if they did have lashes, this video gives you an idea of how different they would look!