Can Cats Eat Seaweed? (Facts and Safe Species of Seaweed) 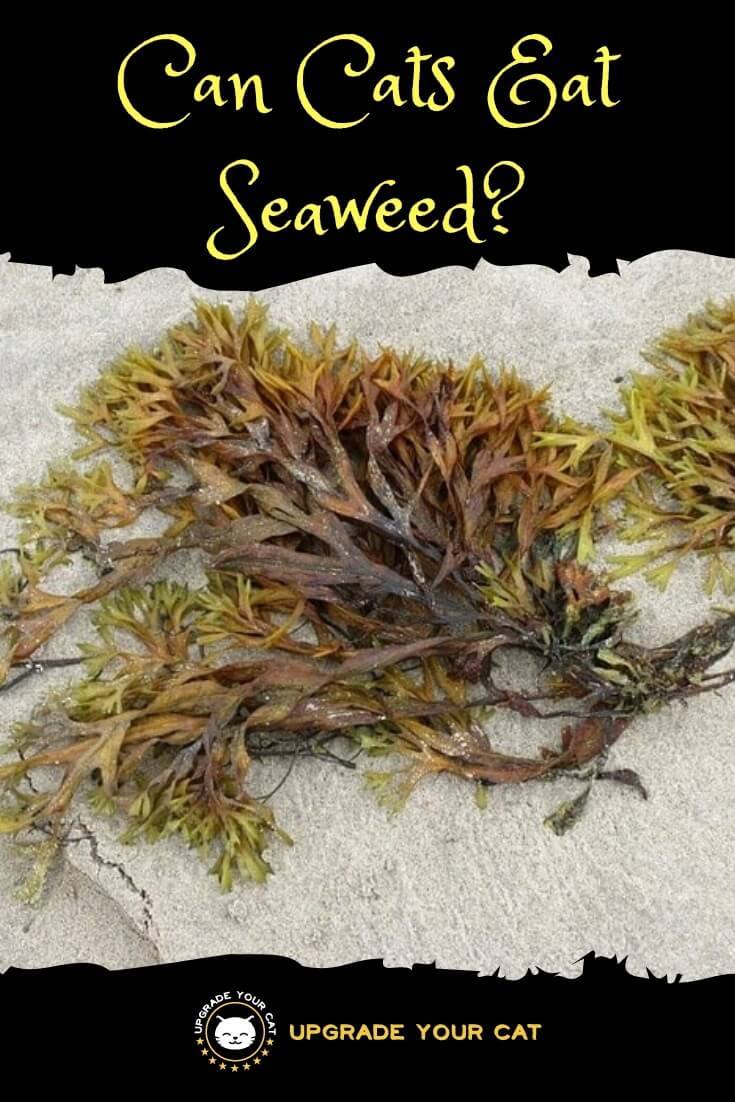 Seaweed is a nutritionally rich superfood that I always enjoy eating, and I know my cats do too. I bet my cat isn’t the only kitty out there that enjoys a little seaweed either, right?

So, in this article I’m answering the questions; can cats eat seaweed? And, are there some nutritional benefits for cats eating seaweed as there are for us?

It’s an interesting topic, and one I decided to explore in a lot more detail as I often feed bits of seaweed to my cat when I’m preparing a meal.

I’d mentioned it to a friend who is a vet a long time ago and they gave me the go-ahead that it was fine. So, I’ve always felt fine about giving my cats a few bits of seaweed here and there but never really looked into it.

There’s more to this topic, you need to know which type of seaweed you’re sharing with your kitty. Different species of seaweeds offer different health benefits – and some shouldn’t be given to cats.

How Healthy Is Seaweed?

For something that is often referred to as a ‘weed’, seaweed is packed with vitamins and minerals, it’s low in calories and fat, and even has some medicinal uses.

According to Self, seaweed is a great source of vitamins A, C, E, K, and B. It’s rich in some key minerals, such as iodine, selenium, calcium, and iron. It also contains amino acids, and on top of all this, it’s delicious!

Well, I love the taste of seaweed, but obviously, it’s not for everyone. That’s the little lesson on health benefits for us out of the way, so if you’ve been on the fence when it comes to trying seaweed, go out and buy some.

Now, back on track with whether or not cats can eat seaweed….

1. There are lots of different types of seaweed and some are better than others as I’ll explain below.

2. You should only feed your cat seaweed that is being sold by a reputable company as it’s more likely to be tested for heavy metals, pesticides, and other potentially harmful contaminants.

Know the Species of Seaweed You’re Feeding Your Cat

Here are some of the most commonly found species of seaweeds that are fine for cats, and some interesting health benefits for us and our cats:

Nori is the edible seaweed that’s used to wrap rolls of sushi and used in a wide range of Japanese dishes.

It’s my personal favorite, and is packed with loads of good vitamins, minerals, amino acids, and is one of the best seaweeds to eat.

Nori is fine for cats to eat. It’s most likely the type most people have given to their cats as it’s readily available and used in so many Japanese dishes.

Wakame is another edible seaweed used in Japanese dishes. It has a strong flavor like Nori but is a lot sweeter, and is also perfectly fine for cats.

It’s low in calories, rich in nutrients, helps to reduce blood pressure and cholesterol levels, and a whole host of other positive health benefits.

If that isn’t enough to encourage you to pick some up next time you’re shopping, and of course share some with your cat, I don’t know what is. 🙂

Kombu is an edible kelp that’s native to East Asia. I’ve tried it a couple of times and it certainly has a distinctive taste that’s hard to put a word to. Kind of earthy I think best describes it.

It’s a lot darker that Nori and Wakame, it’s more black than it is green when it has been dried out. It doesn’t look as appealing, but I’m sure cats wouldn’t be too fussy.

Irish Moss is an interesting seaweed, and one that I bet you didn’t know is used in some breads, jellies, ice cream, and other foods you’ve probably consumed.

It has a wide range of minerals and vitamins, as do most seaweeds. It also has some useful antioxidants and has been used to help alleviate respiratory issues.

It’s fine for cats. Try sprinkling a little over some of their normal food to give it some added flavor, or a dried out piece of chew on.

How Much Seaweed Should a Cat Eat?

The right thing to do is to always check with your vet before giving your cat anything other than their regular cat food. Obviously, the answer will vary depending on the size, age, and health of your cat.

I’ve read some different accounts of how much seaweed cats should eat. I think it’s fair to say that if you want to give them some on a regular basis to help balance out their nutrition, then a small sprinkle on their food should suffice.

I’d say no more than a pinch or a nibble on a small piece on occasion. Do remember that seaweed is a treat, despite being a valuable source of nutrition.

Just like fishes are, such as tuna and tilapia. Ham, cheese, and other human foods are ok in small amounts as I’ve explained in detail if you’d like to check out those posts.

I hope you enjoyed reading; can cats eat seaweed? Know you’re more knowledgable about the health benefits of seaweed, maybe you and your feline friend have a new favorite snack to share!

If you’re interested in know which other human foods are ok for cats, and which aren’t you’ll find loads more posts in the blog. I’ve dug up some interesting information on ham, tuna, shrimp, and some other foods I bet you wouldn’t think twice about giving to your cat.