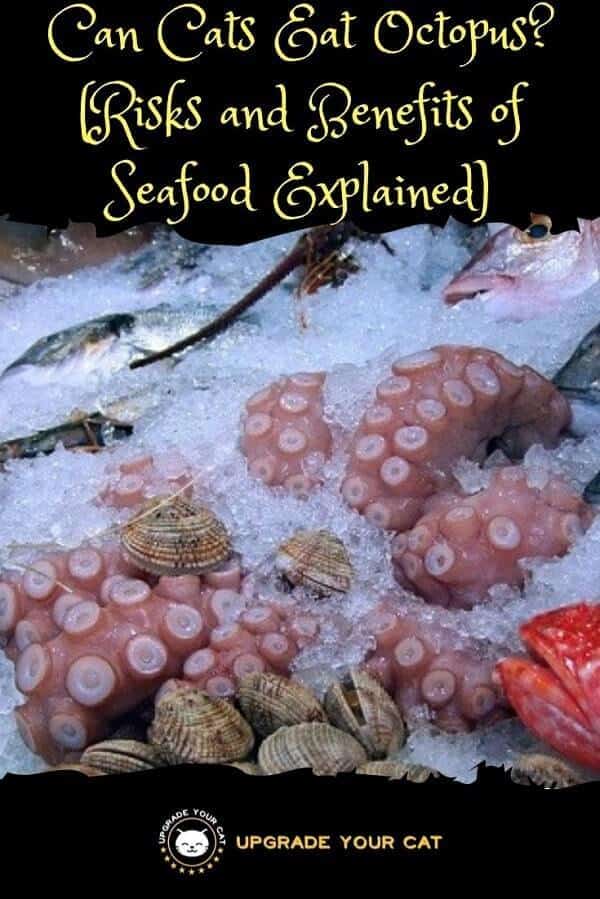 Octopus is quite the delicacy, and while I’m sure you don’t eat if often (or maybe you do?) you’re right to ask, “Can cats eat octopus, squid, clams, and other seafood?” – before sharing any with your feline friend.

Here’s everything you need to know about how safe and healthy octopus is for cats, and how it should be prepared for them;

The short answer to this question is – Yes.

With a caveat that they should only eat a small amount of cooked octopus as a treat on a special occasion. And, you need to be confident that the octopus is fresh and has been properly cooked to kill any harmful bacteria and parasites.

It’s a different case for kittens. Kittens have much more sensitive stomachs, so I’d advise against giving them something like octopus taking into account all the possible risks I cover in this article.

Octopuses are packed with good nutrition. Your kitty will be getting a good amount of proteins, carbohydrates, and vitamins such as B6, B12, vitamin C, and A. As well as a wide range of minerals such as copper, zinc, phosphorus, iron, magnesium, and selenium.

Now, this doesn’t mean that octopus contains a healthy and well-rounded balance of nutrition – because it doesn’t. Cat’s have complex dietary needs, you should always be feeding your cat a well-balanced diet that includes specially formulated cat foods.

Foods like octopus, tuna, ham, and other meats are to be given as occasional treats. It’s no secret that most cats will go to great lengths to get their teeth into some meat or seafood, so it’s your job to make sure they don’t!

We have to be cautious when eating any form of seafood; such as fish, squid, oysters, clams, mussels, crabs, and so on. There is always a risk of bacterias, parasites, heavy metals, and some other potentially harmful elements.

A study conducted in 2013 found an extremely high level of lead per gram of muscle when they caught 60 octopuses. This is far above the allowable amount of 0.2 micrograms.gram as recommended by the World Health Organization.

Hopefully, I’m not scaring you out of enjoying some tasty octopus as an entree next time you’re at a restaurant. I’m sure reputable establishments source quality seafood, and you’re only going to be eating small amounts anyway.

Risks of Eating Seafood For Cats

Just as we have to be careful when eating seafood, you also have to take precautions when letting your cat eat some. This includes octopuses and squids, two of the delicacies that cats love to get their teeth into.

Seafood commonly causes allergic reactions for humans, and it’s no different for our pets. If you do give your cat a little cooked octopus, give them a very small amount the first time. Keep an eye out for any of the following symptoms in the days following:

Any sign of an allergic reaction, no matter how slight – no more seafood of any kind on the menu for your kitty.

We’ve all heard stories about seafood and having a dodgy tummy, right? Maybe you’ve even experienced it yourself as it’s not that uncommon.

According to ScienceDaily, in parts of the world seafood poisoning affects more than 1% of the population. That’s a pretty impactful compared to some other foods.

This is because seafood can be harboring marine toxins, and if not properly procured and prepared, we (or our cats) will ingest these toxins which causes food poisoning.

Seafood poisoning is often a lot more severe than other food types too. It can cause neurological problems, such as numbness and incoordination in severe cases, and gastrointestinal problems.

So, while I’m not trying to scare you, I’d be very selective about what seafood and octopus, in particular, I give to my feline.

In Summary – Cats Can Eat (A Little) Cooked Octopus

The key thing to be aware of if you want to give your cat some octopus to see if they like it is that it has to be cooked.

Don’t ever give your cat raw octopus or any other raw seafood.

I’m almost certain your cat will like a nibble on some octopus. I’ve given mine a little taste on two occasions, and they loved it.

It’s always fun to share different foods with our cats, as long as you do so well informed about the risks and benefits – go ahead and treat them.