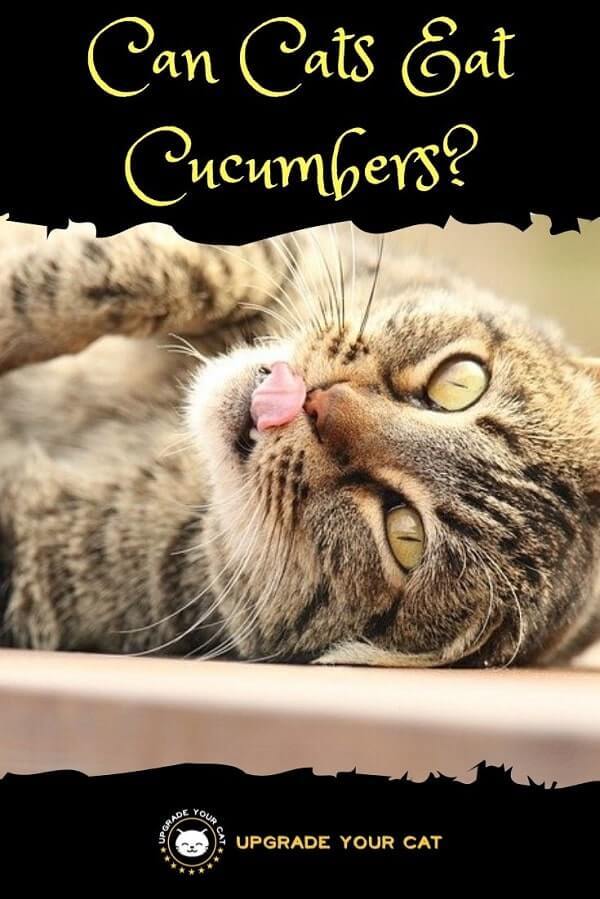 The relationship between cats and cucumbers is more so one of the viral videos with cats jumping at the sight of a silently placed cucumber for them to find.

However, being a healthy vegetable, can cats eat cucumbers?

Is there any nutritional value for them eating cucumbers? Should you be sharing some with your fluffy friend when you’re preparing salads and other dishes?

These are all valid questions if you keep cucumbers in your home. Here’s what I’ve been able to find out:

First of all, I want to talk about a question that comes up from time-to-time;

Are cucumbers fruits or vegetables?

They can’t both be right – can they?

I tried to clear this up for those of you (a small amount I’m sure) that want to know the answer.

According to Healthline, a cucumber is scientifically and botanically a fruit. But, due to how it’s used in the culinary world it’s widely regarded as a vegetable (source).

So, even they are on the fence about it. But, I think if you have to go one way or the other you have to back science. That means cucumbers are actually fruits!

Back on topic, cucumbers are healthy (vegetables). They are rich in a range of vitamins and minerals, contain protein, fiber, and potassium. Plus, they’re 96% water, which means they’re great for hydration.

There aren’t many cats that are going to be interested in eating some. I know for sure both of mine aren’t. But if your cat likes to munch on cucumber you don’t have anything to worry about.

Cats have complex diets that are easily met by feeding them good cat food. They can eat some other foods as treats like cucumbers, but there isn’t a lot if anything for them to gain nutritionally.

It’s good for hydration on a hot day, but that’s about it. On the other hand, a little bit here and there doesn’t do any harm either.

Related – You can read about other foods for cats such as ketchup, bananas, and fish here.

Why Are Cats Scared of Cucumbers?

I’m sure you’ve seen the videos, someone places a cucumber behind a cat and when they turn and see it, they jump 2 foot in the air and run for their lives.

It was an internet crazy a few years ago. I’m not going to post any of the videos here as at the time I saw it as cruel and distressing for cats, and I still think the same.

Imagine sleeping, relaxing, or eating your dinner, only to turn around and see something that makes you jump into fight or flight mode in fear.

The reason cats are scared of cucumbers is that it’s their natural reaction to flee from anything that sneaks up on them if they’re not aware of what it is.

I’ve read accounts of scientists that believe it’s because cats think it’s a snake sneaking up on them. Which makes sense as a cucumber is obviously a similar shape and size to a snake.

Domestic cats still display a lot of the same behaviors as wild cats. It’s just there are fewer situations and opportunities for them to do so indoors.

Related – Why do cats get the zoomies?

What Vegetables Can Cats Eat?

There are some vegetables that are good for cats. You’ll even notice some cats’ foods have vegetables in them too.

Here are 5 of the best vegetables for cats according to Chewy:

Cooked carrots – I see bits of carrot in some cat foods, so I knew it was fine. They have to be cooked and chopped up and provide some great nutrition.

Broccoli – Some people love it, some hate it, but the nutritional value cannot be disputed. If you have some steamed broccoli, pass some to your kitty and see if they’re interested.

Winter Squash – Has to be the plain unspiced squash, but it’s a tasty treat that can help constipation.

Peas – My cats have eaten a couple of peas before, so I know they like them. We just don’t have them very often ourselves.

Green beans – They recommend these for overweight cats to help get them back into shape. Isn’t that most of the domestic kitty population?

Related – Got a constipated cat? Read how you can feed them pumpkin to help relieve constipation here.

I hope this has been a helpful and informative article. Not only do you know that if your cat eats some cucumber it’s not going to do them any harm, but you also know that a cucumber is technically a fruit!

It’s always best to check fruits, vegetables, or any other human foods you want to share are safe for cats. There are some foods that are very toxic, such as garlic, onions, and raisins to mention just a few.

Once you know it’s fine though, as, in the case of cucumber, it’s fun sharing treats with your feline friend.

How Long After Flea Treatment Can I Pet My Cat?

This Is the Cheapest Way to Feed Feral Cats!