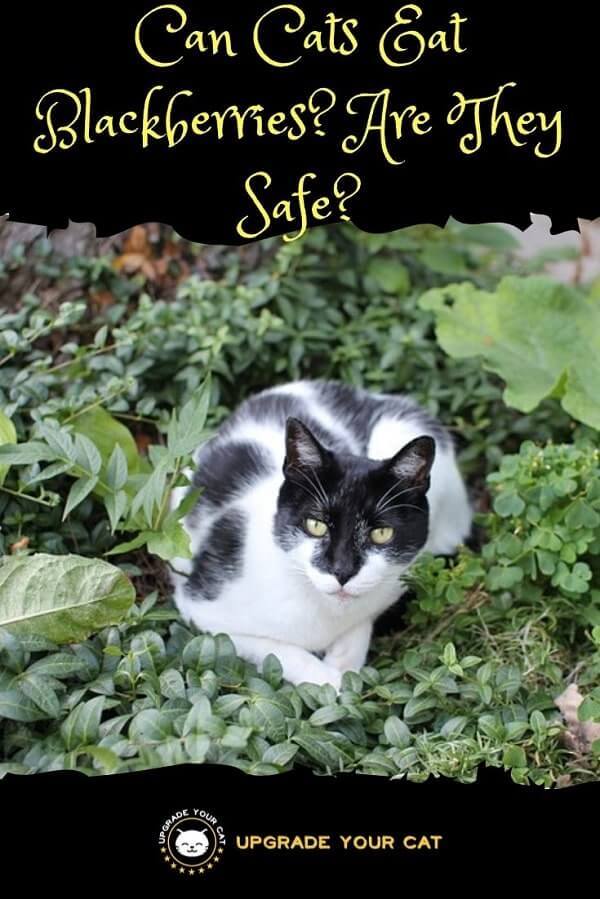 If you do too, you’re right to wonder; can cats eat blackberries?

Cats are obligate carnivores, and for the most part, they don’t stray far from their core diet.

But sometimes a curious cat will try some wild berries and plants, so it’s good to know what’s safe and what isn’t.

Are Blackberries Poisonous to Cats?

In fact, most fruits and vegetables are fine in small amounts. In my experience, it’s very unlikely a cat will eat berries and other fruits anyway.

If you have loads of wild blackberry plants growing in your neighborhood, you’ve no need to worry.

This doesn’t mean they pose no threat at all though. The brambles and prickly shrubbery can be a problem if an adventurous cat burrows deep into an overgrown area.

A neighbor of mine had this problem. A few of us used long sticks and rakes to pull aside some of the brambles to help get her cat “moggy” out last year. It was quite the ordeal!

Are Blackberries Good for Cats?

As far as nutritional content, blackberries are very healthy and provide a good range of nutrition that is great for us.

They contain lots of vitamins, minerals, are rich in antioxidants, and also contain calcium, magnesium, and calcium.

Notice I said “us” above. Cats don’t require the nutritional content of blackberries if they’re eating a balanced diet of formulated cat food.

A berry here and there isn’t going to do any harm. But I can’t say they are “good” for cats either.

Most cat owners have fed a little yogurt to our fluffy friends on occasion. If you haven’t, there’s a high chance your cat has licked an empty pot!

Whether or not yogurt is safe for cats has been a long-debated topic.

There are a couple of issues with yogurt; the first is that cats do not have the amylases enzyme needed to digest sugar. The second is that as cats age and stop drinking milk from their mothers, they become lactose intolerant.

How intolerant a cat is will vary from cat to cat. However, anything more than a little lick is likely to cause an upset stomach.

That’s the low down on most yogurts. Obviously, there are lactose-free yogurts and so on.

Combine this with blackberry flavoring, which in most cases will mean additives and flavorings have been added, and it’s even worse for cats.

So, in a nutshell. Blackberry yogurt isn’t going to do them any harm on the rare occasion, but it’s not something a cat should be eating.

Don’t panic if you’ve been letting (or catching) them licking up some blackberry yogurt. I’d swap it out for some formulated kitty treats in future though.

What Berries and Fruits Are Ok for Cats?

If your cat likes fruit – and some just do – cat food manufacturer Hill’s put together a list of the fruits that are OK for cats:

Apples – Try to avoid giving them the apple seeds

Blueberries – I love blueberries, no chance me sharing!

Strawberries – Not as commonly seen growing wild as blackberries

What Berries and Fruits Are Bad for Cats?

It’s more important to be aware of the fruits that do pose a health risk to cats. Hill’s list the following fruits to avoid letting your cat nibble on:

Tomatoes – Green parts of the plant and tomatoes, in particular, contain solanine, a toxic harmful to most pets

If in doubt, it’s always best to check online and with the ASPCA. There’s nothing worse than seeing a cat in pain due to eating something they shouldn’t have.

Especially if it’s followed with diarrhea or vomiting. Obviously, my first thought is with my cat and their welfare. But the second is on the cleaning up task, that’s my responsibility!

Blackberries are not poisonous or toxic to cats. That’s the most important takeaway from this article, and I was able to confirm this from other reliable sources online.

Not to mention that I live in an area dense in blackberry plants and cats – and there has never been a problem.

Other than an overly curious cat getting stuck in the brambles of a blackberry bush that is!

It’s still not a good idea to give them or any other blackberry flavored foods like yogurt to cats though. Cats have complex dietary requirements that are best met with quality formulated foods and occasional treats.

How Long After Flea Treatment Can I Pet My Cat?

This Is the Cheapest Way to Feed Feral Cats!