Why Do Cats Get the Zoomies? (Several Reasons) 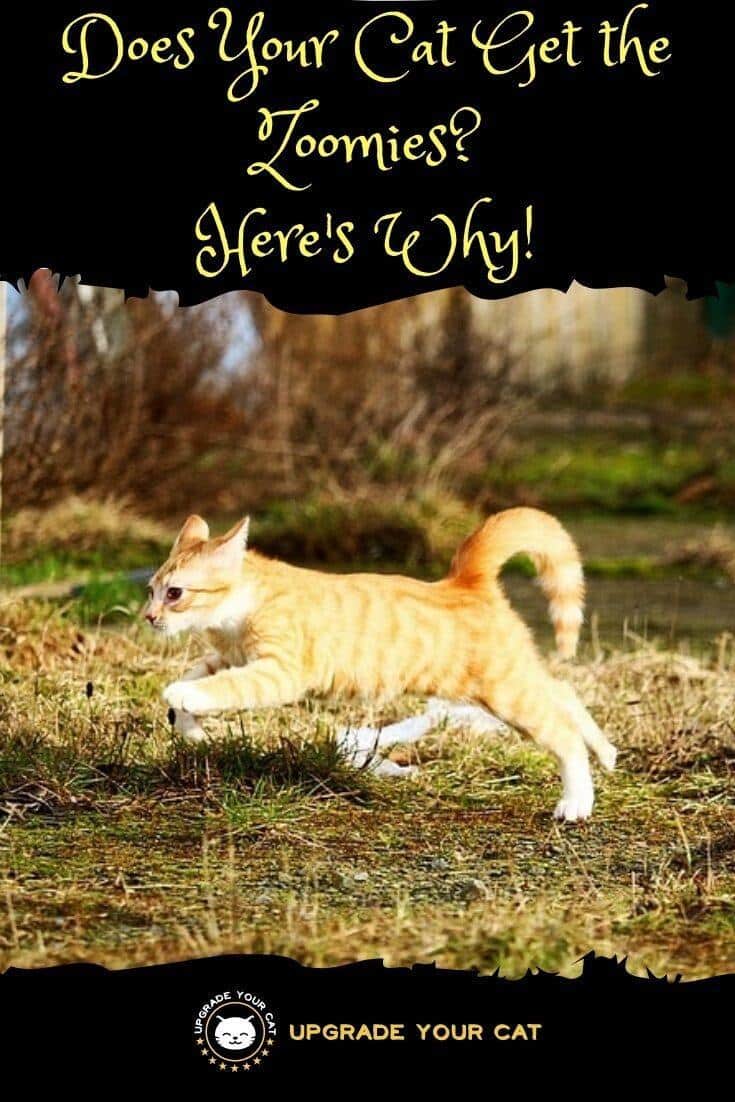 If your cat suddenly zooms off for what seems like no apparent reason, this is called a ‘zoomie’.

But, why do cats get the zoomies? Are there causes and reasons to explain this behavior?

It’s worth trying to narrow down the possible reasons your cat is randomly running around the house like crazy too. There might be a medical issue or something bothering them.

Here are the most common causes of those unexpected bursts of energy known as the zoomies:

A sudden explosion of energy. A release of pent-up energy in the form of running around and fast sudden movements.

Your Cat Is Going into Survival Mode

I’ve talked about a number of behaviors in domestic cats that are deep-rooted in their DNA. Running away after pooping, because they feel threatened in some way, or just because they have pent up energy is one such behavior.

Obviously, there are no threats within the home. At least there shouldn’t be. But this doesn’t stop cats from getting the feeling that they need to get the heck out of there from time to time. It’s their survival instinct.

This means that sometimes your cat will feel the need to get a little exercise and give their muscles a workout. The best way to do this is with a short burst of energy. One of my cats likes running up and down the stairs a couple of times when he needs to blow off steam.

Why Do Cats Get the Zoomies After Pooping? (My Experience)

One of my cats was getting the zoomies after pooping last year. I would hear some scraping in her box as she buried her poop, then after a couple of seconds silence she would leggit out of the box.

It was a covered box with a door flap to get in. So, it was actually quite comical hearing the door fly open and swing back and forth. But I wanted to get to the bottom of it as I had a hunch something was bothering her.

My vet advised me that the most likely cause for this was either a health issue causing pain or discomfort while pooping or something about the box she didn’t like.

I took a look at her poop for a couple of days as they suggested, and didn’t see anything odd there. If her stool was abnormally hard, looked like diarrhea, or had any signs of blood I would have been concerned.

So, I gave her litter box a deep clean and left the lid off when I put it back. I wanted to see what she was doing exactly to see if there was something I could pick up on.

Do you know what happened?

She stopped zooming out of her box!

The box wasn’t smelly, at least not to me. Maybe there was a smell she was picking up on, or maybe suddenly being inclosed with the lid of the box was freaking her out. I’m not exactly sure, but I stopped her zooming out of her box.

Another explanation I read as to why some cats to a post poop zoomie is something called ‘Poo Phoria’.

If this term is new to you, poo-phoria is the term that describes a pleasurable sensation that cats (and us humans) can feel after pooping. There is some science backing this up too.

Cats have a vagus nerve running from their brain stem to their stomachs (source), as do we and some other mammals. It’s this nerve that sends a sensation from the colon to the brain we cats, or us poop.

This sensation can cause a kitty to flee the scene and zoom away. It’s not how we react, granted. But for all our likenesses, there are a lot of differences between us and cats!

Medical Reasons That Can Cause Zoomies

There are a few medical problems that can cause a cat to burst around like crazy too. Here are some of the medical conditions that are known to cause this:

Being bitten by a flea can’t feel good. For some cats it causes them to suddenly run away. They are probably trying to get away from the sensation, but obviously it follows them.

It’s pretty easy to check for fleas. Look for fleas and flea dirt in their coats to rule this out. You should be applying a monthly pipette flea treatment anyway, especially if your cat goes outdoors.

Problems with Their Hearing

If you have an older cat, there is a good chance their hearing isn’t what it used to be. I know this is certainly the case with both of my old girls. This causes one of my cats to get confused sometimes and she bolts off thinking she’s in danger. (see the survival instinct point above)

Allergies or anything irritating your cat will have a similar effect as a flea biting them. They will flee the scene in an attempt to shake off the feeling of being irritated. Check their skin for any signs of irritation or problems with their coats.

Why Do Cats Get the Zoomies at Night?

But back on topic, all the same causes I’ve covered above apply if your cat is getting the nighttime zoomies too. The main difference is that cats are crepuscular animals, which means they are active at dawn and dusk.

So, while you’re getting your beauty sleep at these times, your cat’s body clock is telling them there are things to hunt.

If your cat frequently wakes you up, you probably don’t need me to tell you that you need to do something about it. I can only hope that the information in this post helps you get to the bottom of the cause.

If you’re looking for the short answer as to why your cat gets the zoomies and bursts around your house, it’s likely down to one of the following:

It’s worth investigating and trying to find out what’s causing this behavior. If you can rule out any medical conditions and narrow it down to random bursts of energy, that’s a good thing.