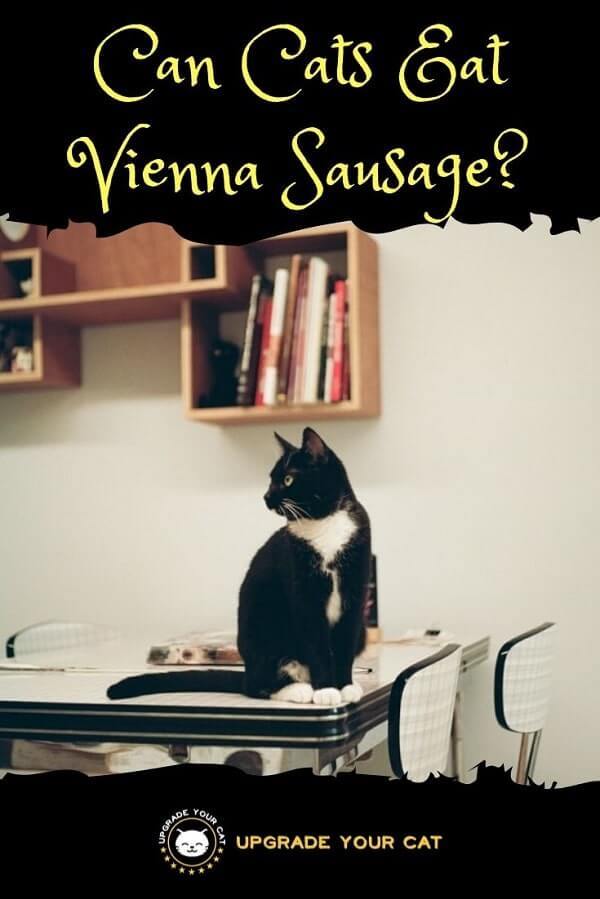 Can cats eat Vienna sausage? Is it safe, or will it cause them to have an upset stomach and other problems?

These are important questions. Especially in our household where we have Vienna sausages and two cats that’ll steal anything left unattended.

If you’re also debating whether or not to share your sausages with your feline friend, here’s everything you need to be aware of:

What Exactly Are Vienna Sausages?

This depends on who you ask and where you live!

Did you know that Vienna sausages or Frankfurters as they’re also called are very different in Europe than the U.S.?

In Europe, a Vienna is often called a Weiner, which is German for the word Vienna. They’re also called Frankfurters.

There are some differences, however, as there is no federal standard or set recipe worldwide.

In Europe, this sausage is traditionally made from spiced ham and is very similar to what U.S. residents know as a hot dog.

A Vienna sausage as you’d buy from a store in the U.S. is also made from a pork paste, and sometimes other meats like chicken and beef, and mixed with various spices.

They are typically thicker and shorter though and do have a different taste to their European namesake.

What’s in a Vienna Sausage? What Are They Made Of?

The exact ingredients vary as I explained that there is no set list of ingredients.

However, looking at Libby’s Vienna sausages I can see they are made from:

I always enjoy looking at what’s really in foods. Some of those ingredients came as a surprise to me, what about you?

I can tell you right away that most of the ingredients in Vienna sausages are not good for cats. In fact, some are pretty bad and should be avoided.

The only “good” stuff for cats in these sausages is the meat. Yet, it’s processed meat, so it’s still not what they’d be eating in the wild by catching prey.

Then there’s the sodium, salt, preservatives, spices which include garlic and onion powder, sugar, etc.

All ingredients that cats shouldn’t be eating!

Related – Like ketchup with your sausage? Check out – can cats eat ketchup?

You’re right, a little bit now and then probably won’t do any harm. Also, if your cat has had some in the past, don’t feel bad.

Personally, I prefer to just not let my cats eat these kinds of foods that are bad for them.

There are loads of foods they can eat as treats like commercial cat treats. So, there’s nothing wrong with spoiling your cat, just make sure it’s only with foods you know aren’t bad for them.

This will also make them less likely to bother you when you’re eating too. Which, I don’t know about you, but I can do without those big eyes staring at me when I’m eating.

There is always a risk of them having an upset stomach from foods that are high in preservatives and spices.

Even from eating small pieces of greasy or processed meats, your kitty might have diarrhea. At best, they’re going to have the tummy rumbles as these are foods that are foreign to them.

Unless that is, your cat has been getting away with eating this kind of stuff for some time. Don’t worry, I’m not judging anyone here – just highlighting what’s in foods and whether they are good or bad.

Just keep this in mind when you’re thinking about giving into those begging eyes.

Some Other Foods That Are Bad for Cats

While we’re on the topic of foods that are bad for cats, I thought I’d list some of the worst foods that seem innocent:

Chocolate – Chocolate contains compounds that are dangerous to most pets. Always keep foods containing chocolate to yourself – shouldn’t be too hard, should it?

Dairy products – It’s become pretty well-known that milk and other dairy products aren’t good for cats. Despite the old wives’ tale that a bowl of milk will do them some good.

Alcohol – I’m not suggesting you would share a drink with your cat. It’s important you don’t ever leave alcohol unattended though, it can be potentially fatal even in small amounts.

Grapes and raisins – Another food that surprises most cat owners. Even a small amount of raisins or grapes can cause serious digestive issues, abdominal pain, diarrhea, and worse.

Garlic and onions – These are two foods known to cause damage to cats’ red blood cells. As I mentioned above, Vienna sausage and other meats with “mixed spices” often have onion and garlic powder in, which is why I avoid giving them to my cat.

I’m sure you’re aware of the fact that cats are obligate carnivores. Or, you were at least aware that they are meat-eaters.

This doesn’t mean they can eat any meat. Deli meats, processed and greasy meats, and meats seasoned in spices are bad for cats – so that rules out Vienna sausage, pepperoni, hot dogs, and anything similar.

If you want to give your cat some meat, hand them some plain cooked chicken or beef. They’ll be just as happy, and their stomach will be even happier!