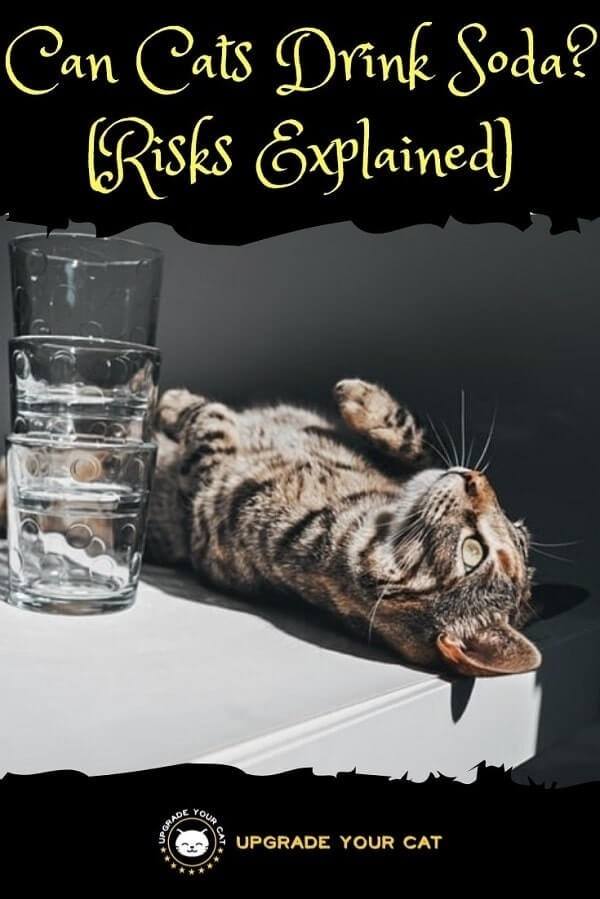 Most cats will take advantage of any foods and drinks left unattended and have a taste, lick, or just finish off whatever they find.

This can be hazardous to their health and is potentially very dangerous though.

In fact, many of the common human foods and drinks we love are toxic to cats.

For example, most sodas are very bad for cats as they contain caffeine, are high in sugars and other sweeteners, and contain other ingredients

So, if you’re wondering, can cats drink soda? The answer is no. Cats should not drink sodas as they contain several harmful ingredients. This means Sprite, Coke, Pepsi, Dr Pepper, etc are all on the banned list.

What Happens If a Cat Drinks Soda?

It depends on which soda they drink. The ingredients in different sodas vary a lot so the effects will also vary, but it’s always going to be bad.

The two main issues with cats drinking soda are caffeine and sugars. Two ingredients that are very bad for cats, the caffeine in particular can be deadly to cats.

As an example, here are a few of the most popular sodas and how much sugar and caffeine is in them:

The Effect of Caffeine on Cats

According to PetPoisonHelpline, even a small amount of caffeine can cause the following symptoms in a cat:

All the kinds of symptoms we associate with caffeine, but of a much more accelerated and serious nature.

If a cat has ingested a large amount, then they can have a seizure, experience tremors, and can even die as a result.

The Effect of Sugar for Cats

Sugar doesn’t have the same immediate toxic effect as caffeine. It can, however, cause some serious long-term health issues.

Cats do need certain types of sugars in their diets. They get these from their formulated foods though, and it’s not the type of sugar found in sodas and other carbonated or fizzy drinks.

If a cat consumes foods or drinks containing sugar on a regular basis they are at risk of obesity, insulin resistance, diabetes, liver or kidney disease, and some other long term issues.

What Other Drinks and Foods Contain Caffeine?

Now you know how toxic and dangerous caffeine is to cats, you can be more mindful about other foods and drinks that may contain caffeine.

Some of the common foods and drinks with caffeine are:

It’s surprising how many foods and drinks contain caffeine. Caffeine is a powerful stimulant, so it’s often added to drinks that are designed to give you a boost in energy.

The bottom line is that it’s just not a good idea to let your cat take a sip or a lick of any drinks intended for human consumption.

Cats should drink fresh water, and that’s it. No matter how much they bother you or give you those “feed me” eyes. Just stick to the good stuff, water.

Related – Does your cat have a sweet tooth? Check out; can cats eat marshmallows or caramel?

Should You Be Worried If Your Cat Licked Some Soda?

A lick here and there is unlikely to cause any health issues. If you know your cat has been lapping up some soda previously, my advice is – don’t stress over it.

I would put a complete stop to it from this day forward though. As I explained above, sugar intake can become a real health issue in the long term.

You might not see any ill-effects now, but your cat might develop some health issues later on.

There is also the fact that cats are creatures of habit. Letting them have a lick from time-to-time is just going to make them expect more in the future and bug you for some when you’re drinking.

Sodas are on the banned list for cats. Depending on how much caffeine, sugar, and other preservatives are in them, a few licks of soda can be potentially very dangerous for a cat.

I’m not suggesting you would ever deliberately share a soda. But it’s something you need to be aware of when leaving drinks out, some cats will help themselves for sure.

Can Cats Eat Graham Crackers? (Safe, but Not Ideal!)