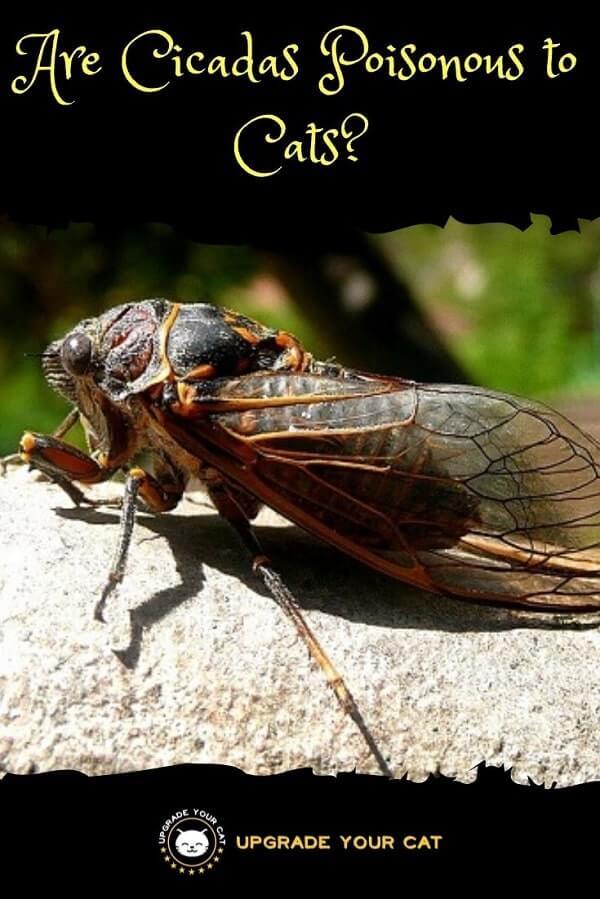 If you have cicadas near your home you’ll know about it because they are noisy insects. It’s hard for most cats to resist chasing these little critters, so you’re right to ask, “Are cicadas poisonous to cats?”

The good news is that while cicadas look a little menacing, they don’t bite, sting, or possess any poison or toxins.

So, they don’t present any real threat to cats, dogs, or other pets you have in your home.

If your cat tries to eat one, they might experience some stomach upset. This is due to their exoskeleton being difficult to digest, not toxins.

There is also a slim chance of your cat ingesting parasites too. So, even though they aren’t poisonous, if you can stop them eating cicadas, I would.

What Are Cicadas and Where Are They Located?

Cicadas are interesting little insects. They are best known for the continual clicking and buzzing noise they make, which can become quite the chorus when there are hundreds, even thousands of them.

The first time I came across cicadas was when I was on vacation in the south of France. The racket they made at night was like nothing I had heard before. I asked a local what was making the noise, and they explained it was thousands of these insects in mating season.

There are around 3,000 species of cicadas, and they have some interesting life cycles and characteristics. Some disappear for years at a time, only to return to the same spot. In fact, there are 12 types of what are called 17-year cicadas, which disappear for 17 years before returning.

The only real threat they pose is to young and fragile trees and wildlife. They don’t attack or harm small animals. However, it’s fair to say they can cause you some serious annoyance if they congregate near your home and you can hear them at night.

Cicadas are slow-moving insects that make their presence well known by making a distinctive buzzing sound – so it’s no surprise that they are a target for small animals and larger insects.

I’ve heard lots of stories about dogs eating them, but never a cat, personally. Either way, they don’t do any serious harm to cats, dogs, or other small animals as they don’t possess any defensive mechanisms.

They don’t produce any toxins or poisons, so they are pretty much defenseless when it comes to being preyed upon. They aren’t known to carry any diseases or parasites to be worried about either.

They do however have a hard crunchy shell and an exoskeleton that can be hard for pets to digest. I’ve heard of dogs having gastrointestinal issues such as stomach pain, vomiting, diarrhea, and feeling unwell – hardly surprising, is it?

So, it’s fair to assume that a kitty could experience the same problems and symptoms if they munch on these little critters.

On a side note; cicadas are actually a delicacy for humans in certain parts of the world. I would never eat an insect myself, but fried cicadas can be found on the menu in parts of Asia.

As I’ve already explained, cicadas do not have the ability to bite, sting, poison, or produce toxins. So, you do not need to be concerned about them hurting your cat if you have them buzzing around your home.

There are however some small risks. It’s unlikely, but the ways they can potentially harm cats are:

Pesticides and Parasites – If they have been sprayed with pesticides or have some kind of parasites, a cat could become sick by ingesting them.

Gastrointestinal Obstruction – Chewing on hard-shelled insects with rigid wings can cause kitty’s stomach problems. Not really a surprise, eh.

Allergic Reactions – There is always a risk that eating something different can cause an allergic reaction. I’ve read that some humans experience allergies, so it’s a possibility for pets to be aware of.

In Summary – Are Cicadas Poisonous to Cats?

I hope this article has helped reassure that there’s nothing to be worried about if cicadas are grouping around where you live. As well as providing a bit of interesting information on these little creatures!

They don’t pose any real threats, that’s the bottom line.

I always try to discourage my cats from eating bugs and insects if I can (especially Stink Bugs, yuck). But there’s only so much I can do when they’re out roaming, hunting, and playing with prey.

Have your cats ever eaten a cicada that you’re aware of? It’s a bit gross, but natural behavior from a cat as they’re demonstrating their natural hunting instincts.