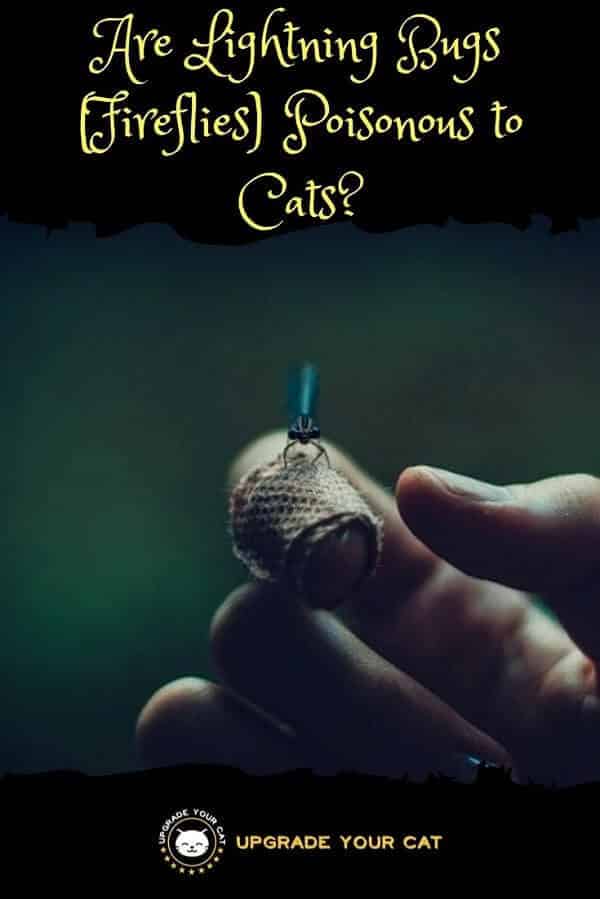 But these little glow bugs pack quite the toxic punch. So, if you’re wondering; are lightning bugs poisonous to cats?

The answer is – Yes, they are.

Lightning bugs possess a chemical that is very toxic when ingested. Small lizards and similar size animals can die from eating just one firefly, so it’s incredibly important that your cat does not eat lightning bugs.

They’re interesting little insects. If you want to more about them, the risks they present to cats, dogs, and other animals, and what to do if your cat eats one – please read on.

What Are Lightning Bugs and Where Are They Located?

Lightning bugs, also called fireflies are a soft-bodied beetle (Ladybugs are also part of the beetle family) that gets their names because they glow at night.

They do this because they have a chemical compound called lucibufagins in their lower abdomen. Lucibufagins might make them look cool by glowing at night, but it’s actually a defensive steroid that glows to warn predators that they are toxic.

Fireflies live in tropical climates and are usually found flying around wet wooded areas and marshlands. In the U.S the states with the most fireflies are Pennsylvania, Florida, and South Carolina.

There are some 2,000+ species, and they can differ in size and appearance quite a bit. There’s no mistaking the glow they emit at night though. In some parts of the world, they’re simply called “Glow worms”, or “Glow bugs”.

If you come across them you don’t need to be concerned about being harmed. They don’t attack humans or pets. Their defensive mechanisms are designed to warn off predators and do harm to anything that tries to eat them.

Related Content – Is it OK for cats to eat centipedes?

There’s good and bad news. The bad news is that lightning bugs are actually very toxic to cats. As well as dogs, other small animals, insects, and any living thing that thinks it’s a good idea to eat them.

The good news is that it’s very difficult for a cat to catch and eat a firefly, so it’s very unlikely they will eat one. Even if you have them in the area where your cat roams and hunts.

It’s lizards and birds that prey on these little insects the most. They regret doing so shortly after as firefly toxicosis is fatal to small reptiles, animals, and birds as I’ll explain in more detail below.

It’s difficult to control what your cat chases and eats while outside roaming. But, fireflies are so toxic it’s worth doing everything you can to ensure your cat’s exposure to them is minimal.

What Happens If a Cat Eats a Firefly?

Investigating this topic I found a couple of accounts from cat owners saying their cats attempted to eat a firefly but quickly spat it out when they tasted it. I also spoke to a friend that said the same thing.

Apparently, fireflies also taste and smell foul (I’m not going to find out first hand). This is a good deterrent if your cat does manage to catch one.

Plus, one firefly shouldn’t be enough to cause serious harm to a cat or be fatal. Although, one is toxic enough to cause some gastrointestinal and motor issues. The toxin actually affects how an animal moves and thinks by disabling an enzyme that transports ions across cell membranes.

Fireflies really do pose a serious toxic threat to any animal that eats them.

Bearded dragons find them hard to resist and are much better at catching them. If they eat a lightning bug, they start shaking within 15-20 minutes as firefly toxicosis sets in. They will retch and vomit as the horrible taste registers and they become aware of the ill effects – and can be dead within 2 hours.

In Summary – Are Lightning Bugs Poisonous to Cats?

Lightning bugs, fireflies, glow bugs or whatever you call them where you live are poisonous little insects.

The chemical compound that creates the glow in their lower abdomen is called lucibufagins. This compound is toxic, and when ingested is powerful enough to kill a small lizard within a couple of hours.

Fortunately, there aren’t many known cases of cats eating fireflies as they’re hard to catch. But it’s certainly worth keeping in mind how toxic they are if you have any small pets that might come across them.

What’s your experience with lightning bugs? Has this information come as a surprise to you? Did you know how toxic these little critters were?