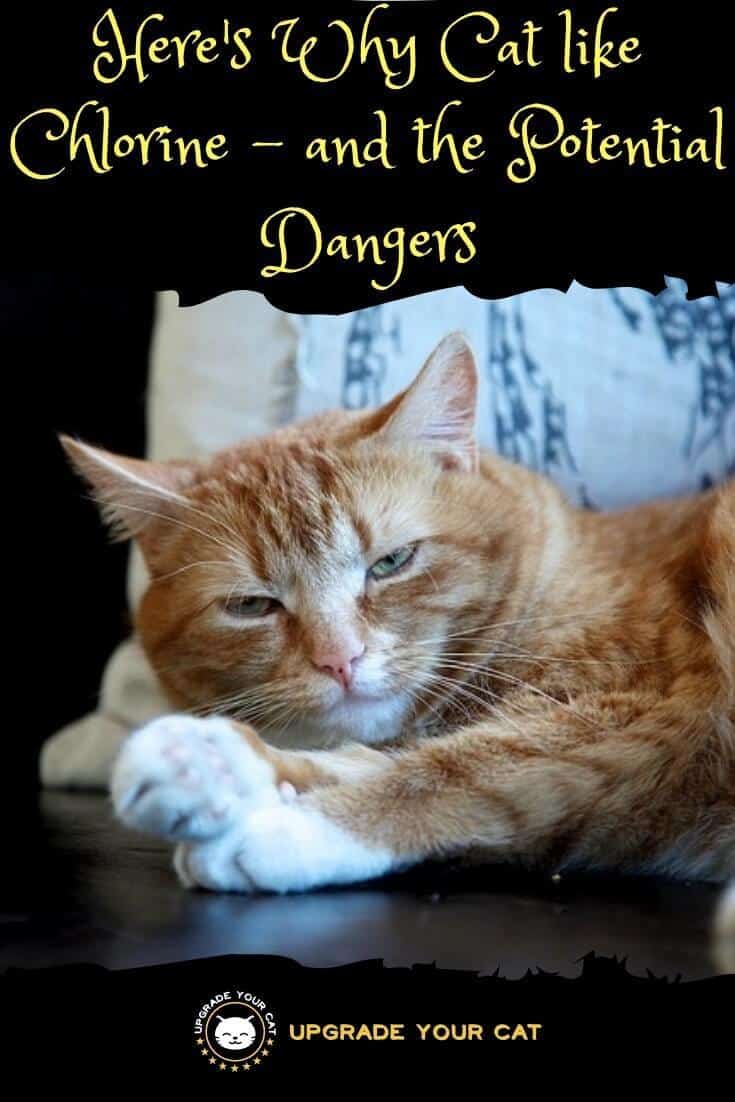 If you’ve come home from swimming to find your cat seems more affectionate to you than normal, you’re not alone.

I wish I could say it’s because they missed you. But, the reality is that most cats are drawn to the smell of chlorine. So, that’s what they’re really after. A sniff of your wet swimming gear, or you if you smell like chlorine from the pool.

This begs the question, why do cats like chlorine so much?

It’s a strange phenomenon that cat owners have been asking for some time. I’ve read various studies and opinions from experts and the curious alike trying to pin down exactly why, and here’s what we know:

While it’s not been proven scientifically (as far as I can tell), it’s believed that cats are drawn to the smell of chlorine as it stimulates a very similar response to pheromones.

Pheromones are basically signals that cats leave behind in the way of a scent. These scents are then picked up by other cats and they have an uncontrollable reaction to them. Which usually involves rolling around on the floor in enjoyment.

Chlorine does have a strong, distinctive smell. I’m sure we can all agree on that. But whether we like the smell or not, it doesn’t have the same releasing effect on us than it does for cats. No one has been able to pinpoint the exact element causing this reaction, but chlorine is little more than calcium hypochlorite – so that’s likey the offending chemical.

This also answers another common question cats owners have – why do cats like bleach? It’s because bleach contains chlorine and has a very similar smell and releases the same chemicals.

Is Chlorine Harmful to Cats?

Chlorine is potentially harmful and toxic to cats, yes. There is little to no risk if you’re using chlorine in your pool at home, though. So, don’t worry or rush out and cover your pool.

When was the last time you saw your cat in the pool, right? Ok, I’m joking a bit, there is a real risk they will drink pool water. But the amount of chlorine in pool water shouldn’t be enough to cause any harm.

I would still discourage your kitties from drinking the pool water, however. It’s obviously not as healthy as fresh water and isn’t a good habit.

Chlorine tablets, gas, or liquid are the real hazards you need to be aware of for your feline. Much like you would store these substances from a child, you need to keep them properly stored so there’s zero chance they can get to them.

Can Cats Get Chlorine Poisoning?

It really comes down to the dose, exposure, and so on. But the answer is yes, cats can get chlorine poisoning if they were exposed to too much. I have to stress, however, as I already mentioned, the risk is minimal to none from the amount of chlorine in your pool or damp swimming costume.

The real risk is a cat being exposed to chlorine tablets or liquid in concentrated form. There is a serious risk of chlorine poisoning from chlorine products.

What Are the Signs of Chlorine Poisoning in Cats?

Pools with high levels of chlorine can cause irritation to sensitive areas like the eyes and ears if your cat decides to take a swim. It’s more commonly seen in dogs, however, as they are more likely to swim in a pool.

Cats are much more likely to drink water with chlorine in. The potential symptoms to look out for if they’ve ingested a good amount is:

If you have any concerns or suspicions at all that your cat has ingested chlorine and is showing some ill effects get them to a vet asap for treatment.

Where Do Cats Get Their Chlorine Fix?

If you want to discourage your cat’s chlorine habit, here are the places/ways they are most likely to find exposure to it:

On your damp swimwear – As mentioned in the opening comments, people usually find out their cats love chlorine when they are all over them after they’ve been swimming. They might also try to chew your hair!

From a pool – I hope you’re fortunate enough to have a home swimming pool. But even if you’re not, one of your neighbors might do. Either way, it’s a good idea to check if there is pool water nearby that your cat may be drinking. If they are, see if you can do something to put a stop to it.

In storage – If you have chlorine products you’re storing them somewhere. If you don’t have kids it’s likely you’re not locking them away really carefully either. Now you know about cats and how much they love the smell of chlorine it’s time to store them somewhere kitty proof.

Cleaning products – Chlorine and bleach are two cleaning products that cats get that catnip type of buzz off. If you’ve cleaned with bleach you may have noticed their strange behavior, much the same as their reaction to chlorine.

For most people, chlorine isn’t a chemical you and your cat will come across daily. Now you’re aware of the risk, it shouldn’t be too hard to ensure your feline doesn’t come into contact with any.

I hope this article – ‘why do cats like chlorine? ‘- has helped answer this question for you. As well as highlight some of the potential dangers and ways your kitty might be able to be exposed to chlorine.

Like all hazardous substances, there is a risk of toxicity or poisoning if your cat, dog, and any other animal that comes into contact with too much of the product. For the most part, however, smelling chlorine on you or your clothes after a swim isn’t a big deal.

If you want to let them have their moment of enjoyment on your bathing suit, it’s not going to do any harm. You could, of course, give them some catnip toys, honeysuckle, or whatever else gives them the same reaction.