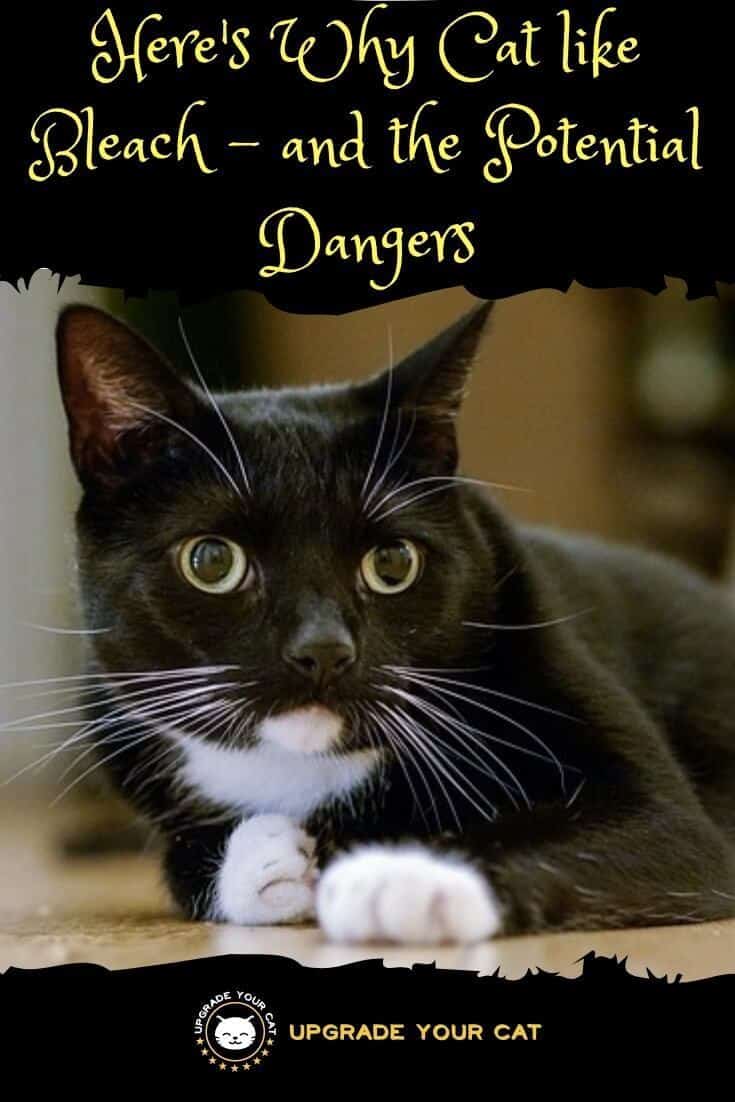 Almost every cat owner that uses bleach around the home has asked themselves this question – why do cats like bleach?

Not only, why do they like bleach, but why do some cats get so crazy over the smell of bleach?

We know how hazardous and toxic bleach is. And, I don’t know about you, but I hate the smell of bleach.

But, it’s a necessary evil because it’s so effective at killing bacteria and germs. However, with a small kid, two cats, and a dog in the house I have to be really careful about storing and using bleach.

As soon as I start mixing bleach with water, one or both of my cats appear. Then they roll about where I’ve used it, similarly to how they react to catnip.

Which lead me down the path to find out why they like bleach so much. As well as what the potential dangers are and anything else I could find out to explain this behavior. Here’s what I could find out;

From a scientific viewpoint, it’s not known exactly why cats are attracted to, like, or love bleach. There is a theory that most cat behavioral experts stand behind though:

It’s believed that one or more chemicals in bleach mimic pheromones that are attracted to. Pheromones are basically chemicals that cats use as a way of communicating with each other and things around them.

Cats have scent glands that release pheromones, and a special organ called the vomeronasal organ (VO) that interprets them. Different pheromones stimulate different behaviors, and whatever it is in bleach that’s lighting up their VO tends to cause the following reactions:

You may have noticed, these are similar symptoms and reactions cats have to catnip. Bleach has a very similar effect, but of course, unlike bleach catnip is perfectly safe.

This also explains why cats love the smell of chlorine too. Bleach contains chlorine, so the chemicals in chlorine are certainly part of what drives them crazy.

Is Bleach Harmful to Cats?

It’s not harmful to cats to roll around where you’ve been using it, so don’t be concerned about that. I still try to discourage my cats from hanging out where I’ve been cleaning with it though. But it’s like trying to keep a couple of addicts away from their hook.

It’s coming into direct contact with bleach either in its concentrated form or diluted that you need to be aware of. The ultra-concentrated bleaches, the stuff that’s usually used in industrial cleanups, is highly toxic. I wouldn’t even let your cats know you’re using it.

There are some really mild bleaches that are designed to be used more liberally around the home. These aren’t as bad, but you still have to make sure they aren’t getting their hands, or worse, their tongues on it.

Will Bleach Fumes Hurt My Cat?

The fumes from bleach can harm your cat, yes. As already discussed, cats are drawn to the smell of bleach. So, don’t ever leave a bottle or mixture open and somewhere they can get at it.

The faint smell and fumes after you’ve cleaned up and wiped away the residue isn’t the issue. It’s them getting a good sniff from the bottle that can do them harm. The fumes can cause respiratory issues, such as labored breathing and wheezing.

Prolonged or continued exposure to bleach fumes can cause long-term health issues. The way I see it is that it’s just a bad habit, so I don’t let my cats smell I’ve used bleach if I can.

Do Cats Get High off Bleach?

No, cats do not get high off of bleach. Some cats do display a similar reaction to that of catnip, which is called a ‘high’. But they are not getting high off the fumes of bleach.

The chemicals in bleach do cause this curious behavior, but as already discussed it’s not clearly known why or exactly what cats are experiencing. In my experience, it’s incredibly short-lived. As soon as they can no longer smell the bleach they stop whatever euphoric behavior they were displaying.

Signs and Symptoms of Bleach Poisoning in Cats

If you have reason to believe your cat is helped themselves or come into contact with some bleach, the signs to look out for are:

If there is a chancen your kitty has come into contact with ultra-concentrated bleach, it’s a medical emergency. Diluted color-safe bleach is less serious, but I’d still get them to a vet for a check-up to be safe if you think they’ve ingested some.

If it’s come into contact with their fur or skin then you’re better off getting them in the bath and washing them right away.

If you’ve been wondering why your cat seems to want to help you clean when you’re using bleach, you now know their real motives.

Hopefully, I’ve helped shed some light on why cats like bleach. The combination of cats being drawn to bleach and their curious and crafty nature will present challenges if you’re not super careful when using and storing bleach.

As with all potentially hazardous substances, the key is making sure your cat never has access to bleach. It’s fine to let them smell and roll around where they can detect the scent. But they should never be able to come into direct contact the bleach of any kind.