Ever wondered why your cat has a saggy belly as they walk past you and you can see that excess fur hanging down or moving while they pass by?

It’s not that strange of a question. Most cats are agile streamlined creatures, so it’s kind of surprising to see that saggy tummy on young cats sometimes.

If you’re even thinking about blaming yourself, stop right there!

Unless your cat is obviously overweight, it’s not due to their diet. It’s not due to being spayed or neutered, or anything else you’re doing.

Saggy pouches, which are technically called an “Apron,” or a “Primordial Pouch” is completely natural and unavoidable as I will elaborate on in this article.

What Is a Cat’s Saggy Tummy Called?

As I just mentioned, there are two names for that saggy, flapping skin your cat is proudly wearing.

Primordial Pouch – The word “Primordial” means to exist at the beginning of time, or in biology terms, it refers to cells and tissue at their development stage.

So, it’s a fitting name for this fold of skin that big cats also have and is more useful to them in the wild than it is for our domestic kitties.

It’s believed to be a feature big cats used in the wild to carry more food, protect them while fighting, and help them hit their full stride. So it’s a primordial thing.

Apron – It’s also called an “Apron,” this is just because the fold of skin looks like an apron and covers the tummy the same as an apron does.

It’s just an observational name as far as I can tell. A lot easier to remember and say than a primordial pouch, so most people end up just referring to their cats hanging tummies as aprons.

Do Cats Get Saggy Tummies from Being Neutered?

This is probably the most common misconception about that excess skin that cats have hanging from their underside.

It may happen as a coincidence, but it’s not as a result of being neutered. We know this because large wild cats have the same saggy skin, and because unneutered cats also have it.

Why Do Cats Have a Primordial Pouch (Sagging Skin)? 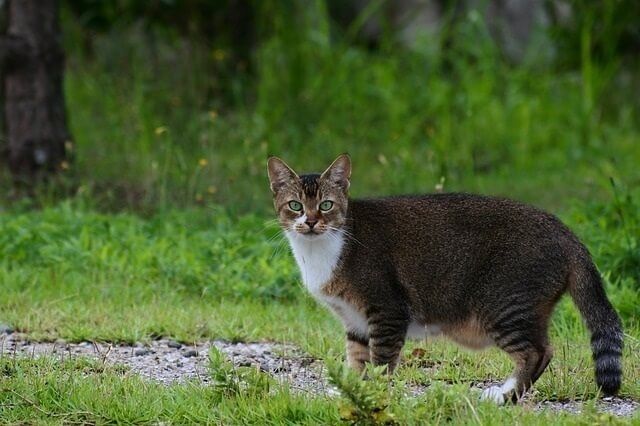 There are a few reasons why cats have this excess skin, namely:

Defense while fighting – Ever seen cats fighting? They tend to try and wrap their opponents up and use their back legs as their main weapons to kick them in the stomach.

Their pouches provide a lot of defense against these kicks doing damage to their internal organs.

Flexibility – Cats are flexible creatures. Having that extra room for movement with excess skin across their midsection makes it even easier for them to jump, extend, and so on.

IIt also allows big cats to fill up with more food in single sittings which is something they do more in the wild as they don’t always know where and when their next meal will be.

There is a huge difference between seeing a primordial pouch on your cat and them having a swollen tummy.

If you think their tummy looks swollen you need to get them to a vet to be checked out asap. I don’t want to scare you but there are some serious health issues associated with swollen stomachs.

The most common reason for a swollen tummy due to a buildup of fluid is called ascites. Ascites is a symptom of whatever problem a cat has, so it’s a warning sign and a clear message to you to get them checked out.

There you go, hopefully, I’ve cleared up all the questions you have about your cats hanging tummy.

You no longer need to point the finger at your cat for being lazy and eating too many treats. Unless of course they are obviously overweight, but that’s a different issue altogether.

Their saggy belly is their primordial pouch, and they wear it proudly in honor of their ancestors. There’s nothing they can do about it, it’s completely normal.

2 thoughts on “Why Do Cats Have a Saggy Belly? (Apron or Primordial Pouch)”