What to Expect After Cat Enema? Aftercare Advice 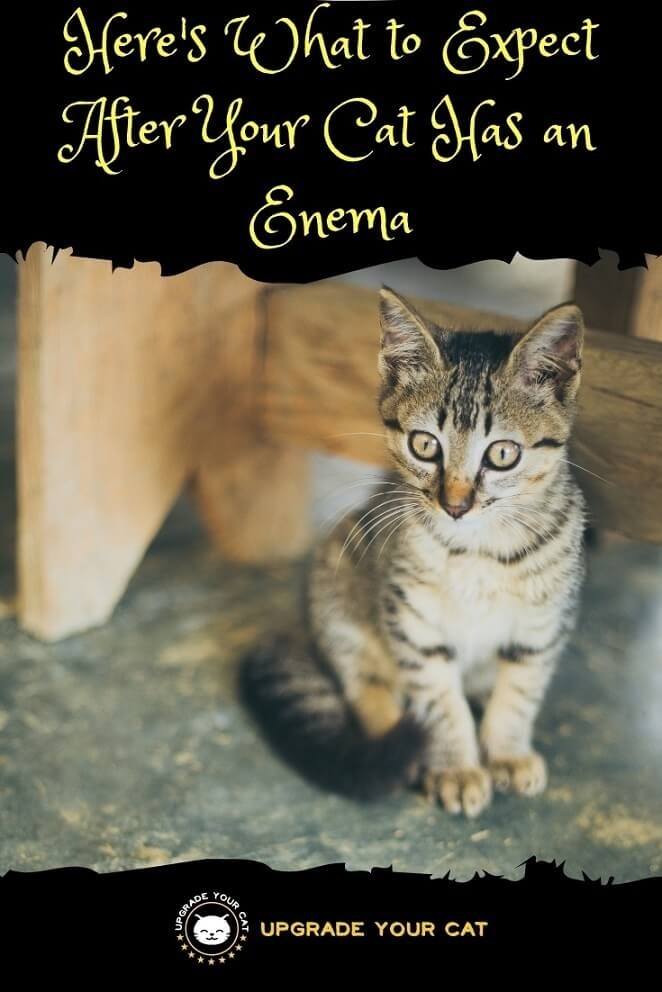 Do you have a constipated cat? Been told by your vet they will need to administer an enema before a procedure? I’m going to explain what to expect after cat enema.

I’ve had to give my cat an enema a couple of times. She’s also been given them by the vet before. Cat enemas are quick, painless, and straight forward procedures, so nothing to worry about.

It helps to be aware of what to expect during and after though. It can certainly help you avoid some messy cleaning up!

Why Give a Cat an Enema?

For those who aren’t aware of what an enema is, an enema is an injection of fluid into the lower bowel via the rectum. This fluid is specially formulated to stimulate stool evacuation.

That’s the medical explanation. In simple terms, an enema involves syringing fluid into your cats bum, bottom, however, you want to term it, to make them poop.

The main reason for giving a cat an enema is because they are constipated. Constipation is dangerous for cats, their intestines can get backed up with hard poop (impacted feces) and cause some serious health risks. This might explain any gurgling sounds you’re hearing from your cat’s tummy.

The main causes of constipation in cats include not drinking enough water, poor diet, or some kind of health issue. In most instances, however, it’s not a persistent problem. An enema will resolve the issue for most cat owners.

Of course, if your cat is experiencing ongoing constipation issues you will need to get them checked out with your vet.

One of my cats had an enema at the vets just a couple of weeks ago. It’s a sad story, she was run over (she’s going to be just fine). But the vet wanted to clear hew bowels to do some further examinations.

A quick enema, a gentle squeeze (don’t worry, you don’t typically need to do this) and she pooped most of what was in here within a few minutes. The rest came out about 15 minutes later!

Is It Safe to Give a Cat an Enema?

When performed correctly, it’s perfectly safe to give a cat an enema, yes. Personally, you should always leave it up to your vet to do it if you can. If cost or availability is an issue, you can perform it yourself at home though.

Where to Buy Cat Enema?

This is the cat enema I’ve used before and it’s available on Amazon. It was recommended by my vet so I have no issue recommending it. If you have any doubts or concerns, you should give your vet a quick call and run it by them.

This product contains sodium lauryl sulfoacetate (Microlax), which my vet explained to me is the safest type of enema. He told me to stay away from any products containing sodium phosphate (Fleet), as these can cause some serious health issues.

What to Expect After Cat Enema – Cat Enema Side Effects

OK, so you’ve given your cat an enema and now you’re waiting and wondering what to expect.

Obviously, you need to keep your cat indoors and make sure they have easy access to their litter box and plenty of water. You may even want to put them in the bathtub, or on a towel to minimize the risk of ruining a nice carpet with poop!

Although, these carpet cleaners are awesome for cleaning up cat poop and vomit should that happen.

Here are some of the expected effects after an enema:

The goal of an enema is for a cat to poop out all the impacted feces and backed up poop in their colon and digestive tract. Typically, within 15-20 minutes your cat should have bowel movements and expel most if not all their poop.

Just keep an eye on how they are behaving and feeling during this period. Hopefully, they will eat some tasty wet food and have a drink.

Diarrhea is a possible side effect after an enema. If it’s a short bout while all the feces pass from your cat, it’s not an issue. Enemas and the amount of fluid used affects some cats differently than others.

If diarrhea persists, and especially if your cat is not drinking enough to avoid becoming dehydrated you will need to seek the advice of your vet.

My cats have not vomited after having an enema, but I’ve heard from other cat owners that have experienced vomiting with their cats. Don’t be too shocked or freaked out if your cat vomits. Take care of them and it should pass once they’ve pooped and removed the pressure on their stomach.

How to Give a Cat an Enema

You can perform the veterinary enema procedure at home, it’s really easy. First of all, I recommend reading the instructions from start to finish as this will tell you everything you need to know.

What I do, is warm the syringe and lubricate the tip. Vaseline is fine to use on a cat’s bum as I’ve explained here. I then calm my cat down and wrap them in a blanket so they can’t get a grip and flee suddenly. (It helps if there are two people doing this.)

I warm the syringe a little and insert it into my cat’s anus about halfway. Then without stalling I gently push the plunger while reassuring my cat everything is fine. I hold her for as long as she will remain still and calm, then place her next to her litter box.

I put some towels around her box in case of any accidents. Then stay with her and try to keep her in that area until she starts passing feces. It typically takes around 15 or so minutes.

Hopefully, this article has helped by answering, ‘what to expect after cat enema?’

If you have any further questions, I’m always here and happy to help. Giving a cat an enema is one of the more straightforward procedures, you shouldn’t run into any problems.