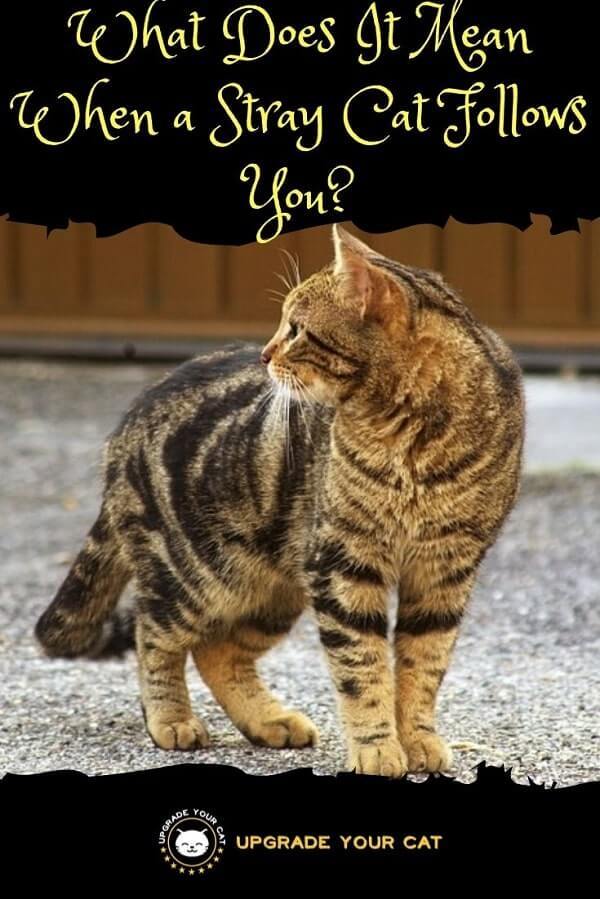 Do you have a stray around your home that’s taken a liking to you? Are you wondering, what does it mean when a stray cat follows you around?

Stray cats don’t just pick anyone to follow, so you can count yourself lucky.

If you want to step in and help the cat, here’s everything you’ll need to know about what to do with stray cats.

The Difference Between Stray and Feral Cats

First of all, you have to be sure that it’s a stray cat that’s following you, not a feral cat.

People use the words feral and stray interchangeably, but there’s a big difference between the two.

A stray cat is a cat that used to have a home. They are more likely to approach people because they were previously socialized and relied on humans to help feed and shelter them.

Whatever the reason, a stray is likely to seek help from people if they’re struggling to find food and water outside.

Feral cats, on the other hand, are cats that were bred and brought up in the wild. They have never lived domestically in a home, and as a result, are often aggressive towards people.

They become very adept at finding food sources and shelter and don’t need help from us. It’s much less likely a feral cat will be following you around, but it’s important that you know the difference.

It’s unlikely a feral cat can be adopted, and there’s more of a risk they are dangerous or carry disease.

If a stray cat has started following you they’re trying to tell you something. It’s almost certainly going to be one or more of the following reasons:

This will come as no surprise to anyone that has owned cats. If a cat is hungry, especially a stray cat that was fed by their owners at some point, they’ll follow humans to find food.

Cats are very clever animals. They know that people are able to provide food, so they approach us when they’re hungry. If the cat is timid they’ll keep their distance and gauge the risk, getting closer to you over time.

Cats also know that we’re able to provide shelter. Strays will remember what it was like to live indoors, and we both know that’s a lot better than living outdoors.

This is one of the reasons why you’re more likely to see a stray cat near your home in the colder months. As the temperature drops, stray cats will make more effort to find warmer and safer shelter.

Related – Where do stray cats go when it snows?

They’ve Seen Something That Interests Them

Another reason a cat will start following you is that they’ve seen you doing or holding something that interests them so they’re trying to take a closer look.

Cats are curious animals, and persistent. If you made a noise that resembled food or was even holding some food, they’re going to investigate. Eye contact and non-threatening behavior are important to feral cats too.

If you’ve demonstrated that you’re not a threat, they will start to get closer to you. See if you can pet them without scaring or startling them. This is the first step towards forming a friendship with the stray.

What Should You Do with a Stray Cat?

If the stray cat that’s been following you gets close enough for you to take a good look at them, you should do the following:

Look for signs that the cats has owners, they might be at home worried about their missing cat. If they have a collar with a name tag and number you hit the jackpot. You can call their owners to find out if they’re missing a cat!

If the cat looks like it’s come from a loving home at some point, the least you should do is put the word out that they’re hanging around you. Post their picture in local groups online, ask around your neighbors, do as much as you’re willing to try and find their owner.

Start Taking Care of the Stray

The fact that the cat started following you shows that they are reaching out for help. While you’re looking for their owner, do what you can to take care of them.

If you can take them into your home and you have experience caring for cats, great. If not, at the very least you can provide some shelter in your yard with comfy blankets, and provide some food and water.

The statistics around stray cats in the US are troubling. It’s estimated there are as many as 70 million stray and feral cats in the US, that’s just mindblowing.

According to the National Council on Pet Population (NCPPSP), less than 2% of stray cats find their way back to their owners too. That means the chances of you returning the stray you’ve found to their owners is slim.

It’s sad to say this, but it’s just the facts.

So, you’re going to have to decide what you’re going to do with the stray if you can’t find their owners. You can contact local shelters and ask for their advice, there might be some space for them to take the cat in – but that’s unlikely too, honestly.

Most people end up “adopting” a stray cat that starts hanging around their home, even if they don’t fully welcome them indoors. By simply providing food and water daily you’re going to be doing the cat a huge service.

I don’t want to put any guilt or burden on you, but you’ll probably be saving their life. Honestly, it’s not your responsibility to take a stray in and you don’t have to feel compelled to do so just because they started following you.

My Story – How I Adopted Bert

I thought I’d take this opportunity to share my own story of how I adopted a stray cat many years ago.

I started noticing a flash of movement through a pane of glass on my front door some mornings as I’d approach and open the front door. It became apparent that a slightly scruffy black and white tabby was following me home and sitting on my front porch.

I could see him out of the front window, but he was quick to run away when I’d open the door to get a closer look. So, I started feeding him a little and leaving water out. Sure enough, the food would disappear, and the water was being drunk.

I had cats in the house and didn’t want to unsettle them so I did this on and off for weeks without trying to get to know him. Until, one day when I went out, “Bert” as I named him was literally caught napping in my porch.

He opened an eye, was aware he’d been caught, and we both just looked at each other. It was as if he was accessing if there was any danger at all, and realizing how comfortable he’d become spending time in my porch, he just stayed there.

I put some food out and left. Over the next weeks, I saw him more and more and eventually started fussing and petting him. I’d sit on the step and talk to him for a while and build his trust.

To cut to the end of the story Bert became a member of our family. He never really came into the house, and I couldn’t identify if he had owners. But I was happy to spare some of my cat food for him, and he was happy to eat it and chill in my porch.

We spent loads of time together over the next couple of years until he just disappeared one day. Thus is the life of a mystery stray, and although I miss him I think it’s best I don’t know where he is now if I’m honest.

If anyone here wants to share their own stray stories, please do. You can either drop me a comment below or contact me via the form on my contact page and I’ll happily add our story to this page.