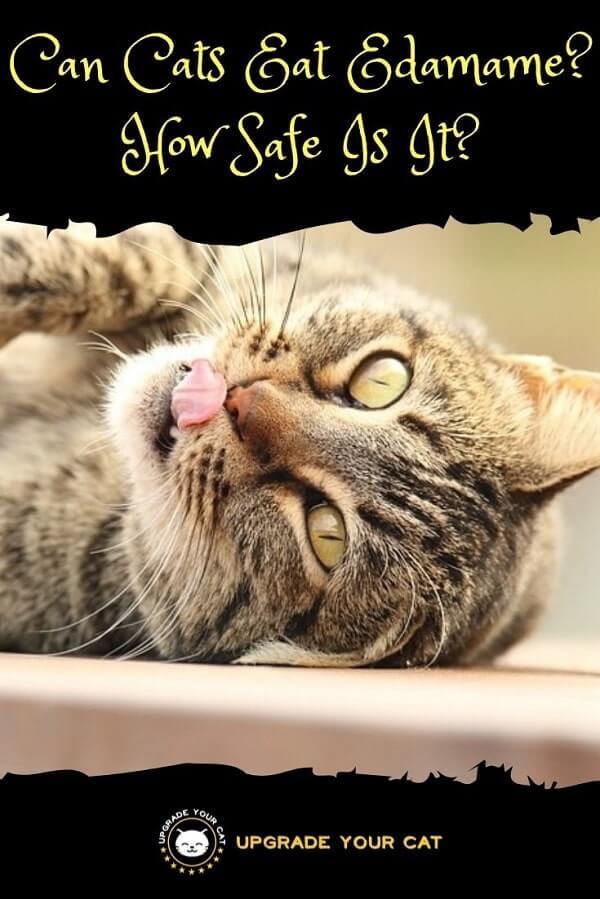 Enjoy eating edamame? Me too.

Have you noticed your cat is interested in trying some too? You’re not alone.

We always have to be careful when sharing our foods with cats. So, you’re right to ask – “Can cats eat edamame?”

The answer is Yes, they can. Edamame is not toxic, poisonous, or harmful in any way to cats. But, you must only allow them to eat a small amount as I’ll explain in more detail in this post.

Most cats will eat edamame, soybeans, tofu, and other similar foods given the chance. I’m not sure why they seem to like the taste of edamame so much, but they do.

I know why I love edamame, it’s soft, sweet and has an ‘earthy’ taste. I love Asian cuisine in general, and will often have a bowl of edamame as a starter when I’m eating out.

I’ve let my cat have a nibble on occasion as a treat too. Don’t feel bad if you’ve also done this, there’s nothing wrong with giving them a little edamame.

If you’re wondering what exactly edamame is, I can explain. If you’ve never tried it, I recommend you do so!

The word “Edamame” is Japanese, hence why it’s a popular dish in Asian cuisine. It means “beans on a branch” when translated, which does a good job of describing them.

Edamame is typically served up in the pod they grew in. The pod is not edible, but it adds flavor when they’re cooked. All you need to do is slip the beans out of the pod and eat them. They’re packed with good nutrition and make for a tasty and healthy snack or starter dish.

As I already mentioned, in my experience most cats like the taste and smell of edamame. So, there’s a good chance they will investigate if you’re eating some.

If you want to share a little with your feline friend, it’s fine to do so. But the keyword here is “little”. Much like most human foods that aren’t meat, cats aren’t going to get much nutritional benefit from edamame so it’s really just a treat.

Cats are obligate carnivores. This means their dietary and nutritional needs can be met by eating prey they catch in the wild. They wouldn’t be eating edamame, soybeans, or any other plant-based foods if left to their own devices. Bare that in mind.

This means it’s also sensible to give them a little bit the first time to test for any allergic reactions or gastrointestinal issues. Cats are often led by their stomachs and aren’t always the best judge of what’s good for them. It’s our job to do that.

Are There Health Benefits for Cats Eating Edamame?

Edamame is really healthy food for us. It’s packed with protein, low in calories, free from cholesterol, high in fiber, omega-3, and various vitamins and minerals.

That’s a number of reasons why you should eat it, but it’s not the same for your cat.

While cats will potentially benefit from some of the nutritional content in edamame, they simply don’t need it. Cats have complex dietary needs, and formulated cat foods do an awesome job of meeting these needs.

On a side note, if your cat suffers from constipation and you want a home remedy, fiber-rich foods like edamame can help. There are better options than edamame though, and it’s not the easiest or most readily available food to give to your cat.

When my vet recommended supplementing one of my cat’s diets with fiber I introduced canned pumpkin which worked wonders. You can also try giving your cat olive oil to help with constipation.

Be Aware of Food Allergies

When giving your cat a new food to try, especially human foods, keep an eye out for any signs of an allergic reaction or intolerance to the food.

If your cat is sensitive to any of the ingredients in edamame they might experience:

When cats have an intolerance to a certain ingredient in their formulated food it can be hard to pinpoint what exactly is causing the problem. You have to go through a process of trying other foods and monitoring which ingredients you’re removing and adding.

It’s a lot easier when giving them new foods as treats, such as some edamame, however. If you notice any of the above symptoms or any other reactions after giving them some, you know it was the problem.

In Summary – Can Cats Eat Edamame?

For the most part, cats can eat edamame without any issues, yes.

Like most foods we eat, however, you should only give them a little nibble as a treat. While edamame is healthy food for us, it doesn’t align with what cats need from their food.

It’s always a fun bonding experience sharing new foods with our cats. Personally, I would get some kitty treats and share those with your cat while you’re eating. It’s a lot better for them overall, and some have good dental hygiene benefits too.

Either way, don’t feel guilty about sharing a little edamame with your fluffy friend. They’ll thank you for it, that’s for sure. The only issue being they might bother you more and more in the future.

What do you share with yours? Have you ever given your kitty a little edamame? How much did they enjoy it?