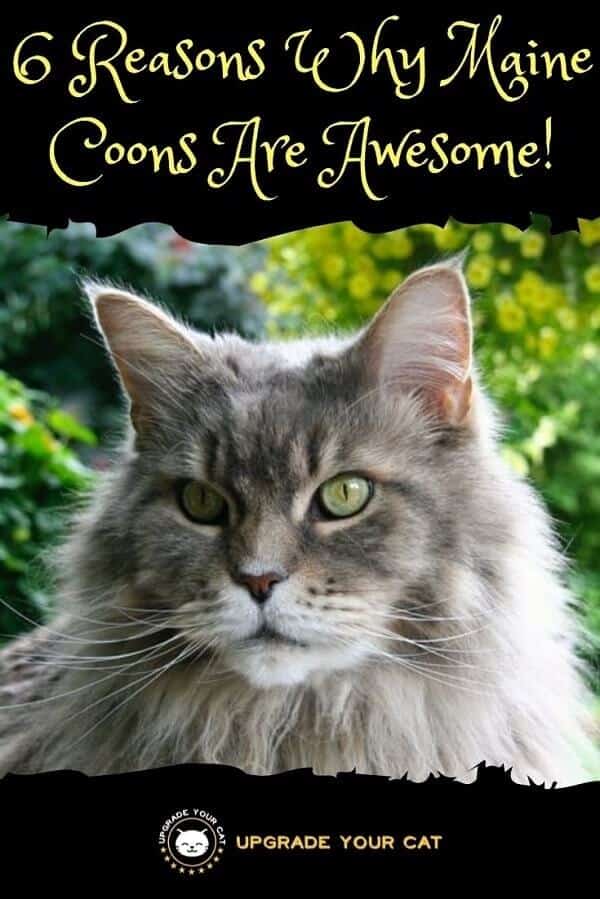 In this article, I’m going to give you 6 reasons why Maine Coons are awesome. If you don’t own one yet, you should be convinced by the end of this one!

Maine Coons are the gentle giants of the domestic cat world. They hold some of the records for the largest domestic cats, and I can tell you from experience they’re even bigger softies.

Perfect for busy households with other pets and kids, great companions, loads of fun…I can’t think of one reason why you wouldn’t consider one of these beautiful felines.

OK, well maybe if you really don’t have enough space for a 10-15 lb cat. But that’s the only reason I can think of!

6 Reasons Why Maine Coons Are Awesome

Let’s be honest here, the main thing that stands out about a Maine Coon is how large they are compared to other domestic cats – and that’s really cool.

I will admit, this can be both terrifying (although there is nothing to be scared of with these big softies) and something to marvel at for some people.

Some of the largest, longest, and tallest domestic cats on record with the Guinness World Records were Maine Coons.

If you’re looking at your kitten and wondering what you’ve gotten yourself into. The average weight of a male Maine Coon is around 8 to 10 kg, or 17 to 22 lbs. Females weigh a little less, usually around 4 to 5 kg, which is about 9 to 11 lbs.

Add all of that fur into the mix and you have yourself a very large domestic cat. Bigger than a lot of small dog breeds, one of the reasons why they’re often referred to as “dog-like”. That and their loyal and attentive personality.

If Maine Coons were not friendly and great with kids and other animals, they wouldn’t be so popular that’s for sure.

Imagine a 20 lb cat attacking you, it wouldn’t end well!

Maine Coons are known to be very sociable, friendly, intelligent, and pretty much the ideal pet for busy families.

The only real downside is also an upside; they love climbing on people and curling up on laps. Which can be uncomfortable after some time as they become dead weights.

I’ve never known mine to be aggressive to other cats in the neighborhood either. My Maine Coon was much more of a stalker. I’d catch him shadowing other cats and watching them from behind a parked car or some other obstacle.

Ok, I will admit this also might be a con to some people. But if you’re a true cat person, I know you want your cat to be vocal and communicate with you.

Maine Coons are known for being a bit chatty. I know the Coon I had years ago was one of the most vocal cats I’ve ever had, and it was great fun chatting with him.

They aren’t really loud, it’s not like they can meow louder than other breeds. It’s more so that they are quick to chirp and meow when they want something. Usually food…

They also purr a lot, which is always a reassuring sign that they’re content. And they’ll often trill as they jump or weave in and out of your legs trying to trip you up.

In a nutshell, if you want a furry friend that will chat back and let you know how they’re doing, a Maine Coon should be near the top of the list. Along with a Siamese, but they are a lot louder.

Most cats are fun, right? Especially when they’re kittens. Maine Coons are amongst the most playful cat breeds, which is quite something as they grow up and get bigger.

If you enjoy rolling around on the floor pulling little toy mice around and waving cat toys on bendy sticks, you’re going to have a lot of fun with a Maine Coon.

It’s important to get a good cat tree, however, otherwise your furniture is going to suffer at the hands of those large claws.

Main Coons are naturally very inquisitive and curious too. If you leave a door open, place an empty box in the room – or just about any new object – they’re going to investigate it.

I remember being woken A LOT when my last Maine Coon was a kitten. He was always up to mischief overnight, but I always saw the funny side.

They Have Amazing Coats

Maine Coons are referred to as “semi-longhaired”. This is fair, as there are breeds with longer coats, like the Siberian or British Longhair cat. But be prepared, they do have long thick coats.

This means you’ll need a good brush and will have to brush them to help keep on top of knots and other tufting issues.

It’s not much of a chore though. As I pointed out earlier, these gentle giants are more than happy to be fussed and handled.

There are few feelings as nice as having a Main Coon snuggle up next to you though. Plus, if you live somewhere cold you can sleep easy knowing they’re well insulated.

They Keep Rodents Away

Admittedly, this will be a pro for some people, and a con for others. Maine Coons are excellent hunters and will bring you “presents” from time-to-time.

If you want a pest control expert keeping mice and other small rodents away from your home, you can rely on a Coon.

They’re also surprisingly agile for their size too and will often be seen up a tree stalking birds or trying to get into their nests.

It’s all very natural behavior. If you want to put a stop to it a bell around their collar goes a long way to giving the prey a little heads up!

If you’re looking for a feline companion that’s going to be a big ball of fun, look no further. Maine Coons check all of the boxes – and then some!

Looking for Maine Coons? Check out some breeders here!