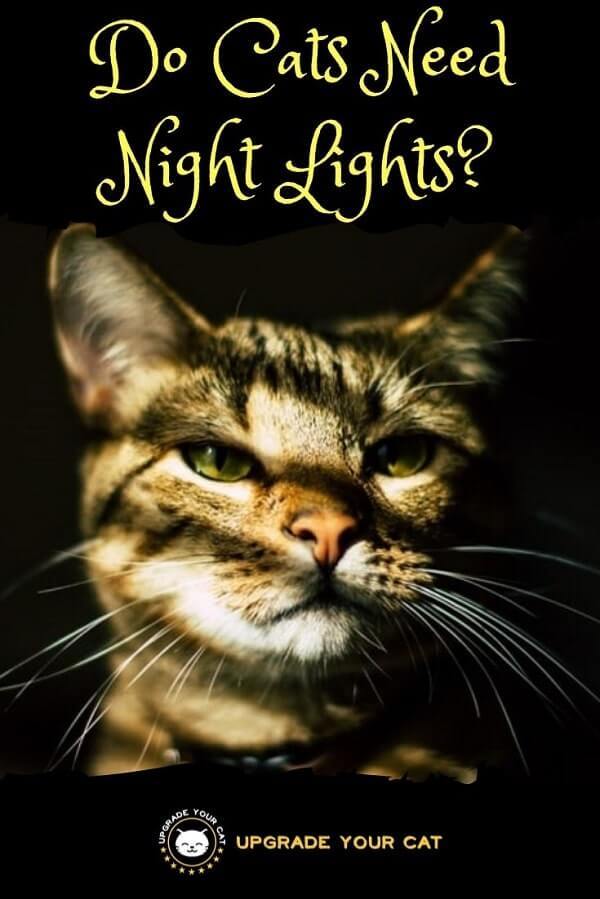 Do cats need night lights? Will it help them see better when they’re roaming around your home while you’re fast asleep?

It’s no secret that cats have much better vision than we do when it’s dark. But just how well can your kitty see in the dead of night?

In this article, I’m going to explain just how well cats can see at night or when it’s pitch black. As well as how to identify cats in need of a little help and some other useful tips.

Do Cats Need Night Lights to See at Night?

According to BusinessInsider, cats have much better vision than we do when it’s dark. If you’re a cat owner, I’m sure you’re already aware of this.

Their research did go into a little more detail, however. Cats can’t see fine details or rich color, but due to having a much higher number of rods in their retina, they are much more sensitive to dim light.

In fact, it’s estimated that they need only one-sixth of the amount of light that we do to see just as well.

They also have something called a tapetum behind their retina. This essentially enables them to reflect what little light is passing into their eyes and improve what they can see.

Interesting stuff, right? Plus, it’s that mirror-like reflection that makes cats’ eyes glow in the dark – or what you’re taking a photo with the flash on and they have those scary green-glowing eyes!

Do Cats Care If the Lights Are On?

Now you know how well cats can see in the dark, the answer to this is “no”. They don’t really care either way if the lights are on, or if you have a night light.

Unless that is, they find themselves in complete pitch-black darkness for any reason. Cats do need some light to be able to see, so you would need a night light if that was the case.

But it’s rarely the case. There is usually some form of light finding its way into the home at night, be it moonlight or from street lights outside.

Another thing to take into account is that cats are crepuscular, they’re not strictly nocturnal as most people assume. This means they prefer to be awake at dawn and dusk, which accounts for why they like to go outside at night.

Do Cats Like to Sleep in the Dark or Light?

The answer most cats owners are going to give to this question is – they like to sleep all day and all night!

Mine are elderly now and although I don’t monitor them around the clock, I’m pretty sure they sleep or go into a deep state of relaxation for at least 20 hours a day.

Who can blame them I say? They are basically past retirement age, they’ve earned it!

It doesn’t really matter to a cat if it’s light or dark when they sleep. Their eyes are sensitive to the light, but if you’ve observed your cat sleeping you’ll notice they do just fine.

One reason for this is because they have three eyelids. Not only do they close their eyelids you can see, but they also have an inner eyelid called the palpebra tertia, more commonly referred to as the nictitating membrane.

Don’t think they aren’t aware of what’s going on around them while they’re sleeping though. A cat’s highly tuned senses are still operating, if they’re sleeping somewhere they’re not 100% comfortable they’ll spring up in a fraction of a second.

Related – Why does my cat sleep on my feet?

Can Kittens See in the Dark?

Kittens develop incredibly quickly, it’s estimated that they can see just about as well as an adult cat by the time they are just ten weeks old.

Their eyes usually open about 7-10 days after birth. Then, for a few days, they are still very dependent on their mothers.

But from there on, if you’ve ever had kittens you’ll know that each day that goes by brings a load more surprises from those little fluffy balls of energy.

There are a few reasons I can think of why you might want to get a night light for your cat, I’m not saying to rule it out completely.

Some reasons that come to mind are:

It’s often easy to forget that cats are considered “seniors” when they hit about 11 years old. I have cats that are 21 and 19, so I know what it’s like to have a couple of old age pensioners around.

Just like us – although in very different ways – when cats get old their senses aren’t as sharp. One of my cats is just about stone deaf, and I’m sure both of them can’t see as well as when they were in their prime.

We actually have a night light in our upstairs hallway for our toddler, and I’m sure my cats make use of the extra dim light it emits too.

As I explained above, kittens do develop good eyesight fairly quickly. It doesn’t hurt to help them out when they’re really young though.

The other benefit is that even though they can see well, you’re improving their vision by switching on a night light.

I’ve been woken up more times than I care to remember of the years because my kittens have broken something in the night.

Maybe they misjudged a jump or maybe they were just being mischievous. I didn’t have any nightlights back then so they did have the excuse that it was dark!

For Rooms That Are Pitch Black

As I also explained earlier, cats only need about a sixth of the light we do to see just as well as us. But if it’s pitch black, they’re going to struggle too.

If you have any rooms, such as a basement, an attic, or a room with no windows, it’s a good idea to put a night light in there.

Night lights are inexpensive to run and emit a dim light. Just enough to make it easy for cats to see well, and for you not to trip over anything…

To Help You – So You Don’t Trip Over Your Cat!

Have you ever tripped over your cat? Or maybe even your dog? You can do yourself a serious injury, not to mention it’s very easy to injure a cat by stepping on them.

I’ve had a couple of close calls over the years. One of my cats likes to sleep on the stairs, as do a lot of cats for some reason, but being well aware of this I always look first.

According to WebMD, there are more than 86,000 fall injuries related to tripping over cats and dogs in the U.S every year. With 66% of those relating to cats!

Unless your cat is elderly or has some special requirements, they do not need a night light, no.

Cats have great night vision at night. They can see well with just a dim light. At least, much better than we can.

If you’ve been leaving a night light on, that’s nice of you. It certainly doesn’t do any harm or annoy them. Who knows, it might just save you a trip to the ER as you won’t trip over them!