Cat Plays with Poop? Here’s What to Do 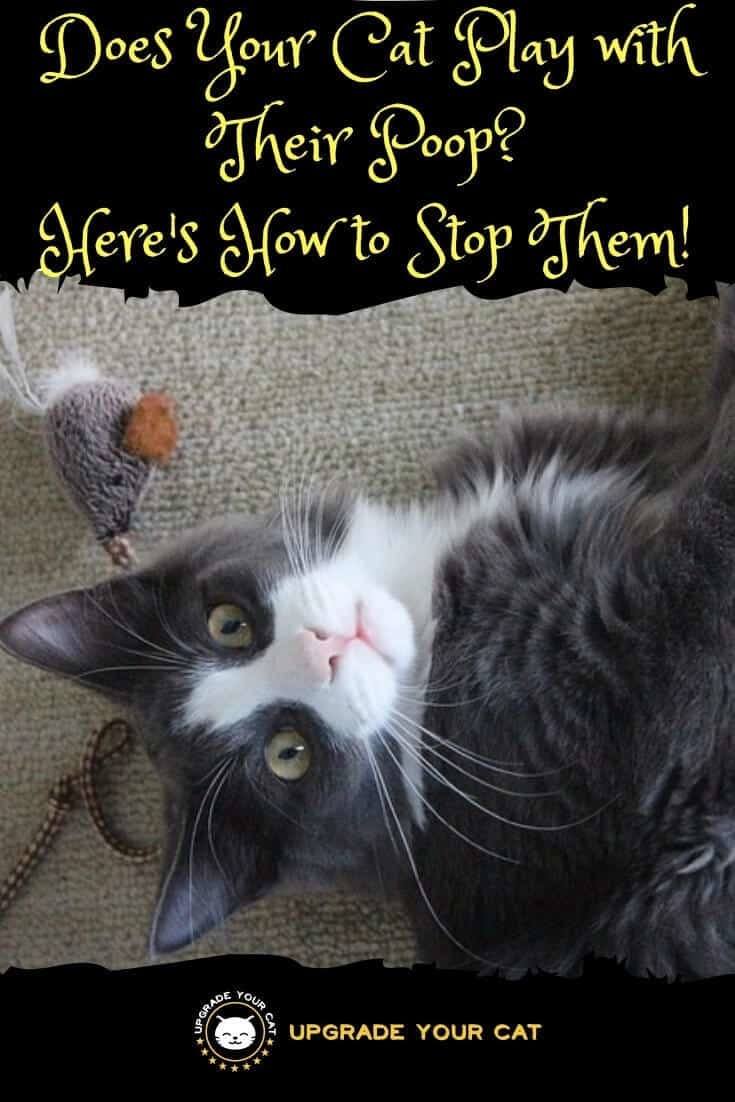 If your cat plays with poop I can sympathize. Fortunately, it hasn’t happened for a few years since my cat was a kitten, but she used to play with her poop and it drove me mad for a short while.

There are a few possible reasons, and some may be specific to your kitty. But, I can tell you how I resolved this issue, and hopefully, you’ll be able to stop this yucky behavior too.

For me, it revolved around finding ways to train my kitten to use her litterbox better. She was using it sometimes but also pooping just outside of it. Then she would play with the poop balls outside of her box.

I also added some distractions that I think replaced some of the fun and curiosity she was getting from hitting her poop around as I’ll explain.

If Your Cat Plays with Poop Try Some of the Following:

I started by moving her litter box to see if there was something about the location of her box that she didn’t like. I also wanted to remove the familiarity of the space where she had been playing with her poop.

It was tucked away in the downstairs bathroom. So, I moved it to a spot under the stairs where I’d had a different box previously. I made sure she was well aware it was there and she started using it right away that day without a problem.

If you really don’t want your litter box visible check out this cleverly hidden litter box disguised as a house plant!

A tip someone gave me when I told them about my cat messing around with her feces was to add more litter to the box. She said that she also had a similar problem, and when she added more litter her cat was able to bury it easier and tended to leave it alone.

It’s also worth experimenting with different types of litter. Kittens and cats can be very fickle when it comes to the feel and smell of a litter they are comfortable using. I know this from personal experience.

I’ve reviewed the best hypoallergenic litter brands and some of the best clumping litters for you if you’re interested.

Does Their Litter Box Smell?

Talking about how the litter smells, have you checked if their litter box is getting a bit smelly? Remember, cats have much more sensitive noses than we do. Even if they like playing with poop, the smell might be keeping them from going in their box.

Give it a real good scrub with disinfectant, then be sure to remove any trace of the smell from cleaning. It has to smell of nothing, cats neither like the smell of old litter or the smell of cleaning stuff.

Sometimes we just need to make it really easy and convenient for our cats to use their litter box. Are you using an open-top type of box? Is the side of the box low enough for them to easily hop in?

I always train kittens using an open-top box. Then I move on to a closed box with a flap to enter. I think these look a lot better and stop smells more effectively.

I’ve had cats that would use the closed style box though. They’d go in just fine but would end up hopping out without pooping in there. Combined with the other litter box tips this is going to make a huge difference if these are the underlying cause.

Give Them Some Small Balls to Play With

I’ve covered all the litter box-related issues that might be causing your cat to poop outside of their box, then play with their poop.

Something else I’ve had success with when changing this behavior is giving them something else to play with. I used catnip filled balls that were about the same size as the poop she was pushing around.

The root of the cause might be that your cat wants something to play with while you’re not around. I placed a couple outside of her litter box, and I think this also helped change her behavior.

Give Them More Attention

If we’re dealing with a kitten or a young cat, this behavior might be down to needing more attention. Kittens have a load of energy to burn off every day. When left to their own devices, I’m sure you’ve found out they can get into all kinds of trouble!

When are they playing with their poop? I bet it’s either when you’re out during the day, or asleep at night, right?

Think about setting up an interactive cat tree or some other toys that will keep them interested when you’re not around. When you are around, play with them and give them some of that attention they crave.

If your cat is playing with their poop I know how frustrating it can be. By going through the steps above, however, I’m sure you’ll be able to change this behavior.

If pooping outside of their box is a persistent problem, there might be an underlying health issue. You can get them checked out by your vet if you think this might be a cause.

Other than that, it’s going to be litter box or behavior related. Both of which can be changed with a little patience and trial and error.

Why Is My Cat Not Covering Her Poop?

If your kitty is leaving their poop uncovered in their box it’s almost certainly down to the type or amount of litter you’re using. I recommend adding more litter first, about 3 inches should be enough.

If they still aren’t burying their poop then try a different cat litter. Cats have highly sensitive paws, it might be too rough for them to make the burying motion. If it’s hurt them before they will associate this bad memory with the motion of burying their poop.

Why Does My Cat Take Her Poop out of the Litter Box?

If your cat is taking her poop out of her litter box (and playing with it) read through the solutions I covered in this article. It’s going to come down to either;

The first two areas I covered above, litter box and behavioral issues. If you think there might be a health issue or want to rule this out you’ll need to get them to your vet to be checked out.

Why Has My Cat Started Pooping on the Floor?

The main causes behind cats starting to poop on the floor are:

Stress – Take a look at what’s changed in their life so see if you can figure this out.

Health issue – If it’s become painful or difficult for them to get into their box they will poop outside of it instead.

Behavioral – Middening is a way cats mark their territory by pooping in the open so other cats can clearly see and smell it. It’s not desirable behavior, as I’m sure you’ll agree. I covered how I stopped my cat middening problem.