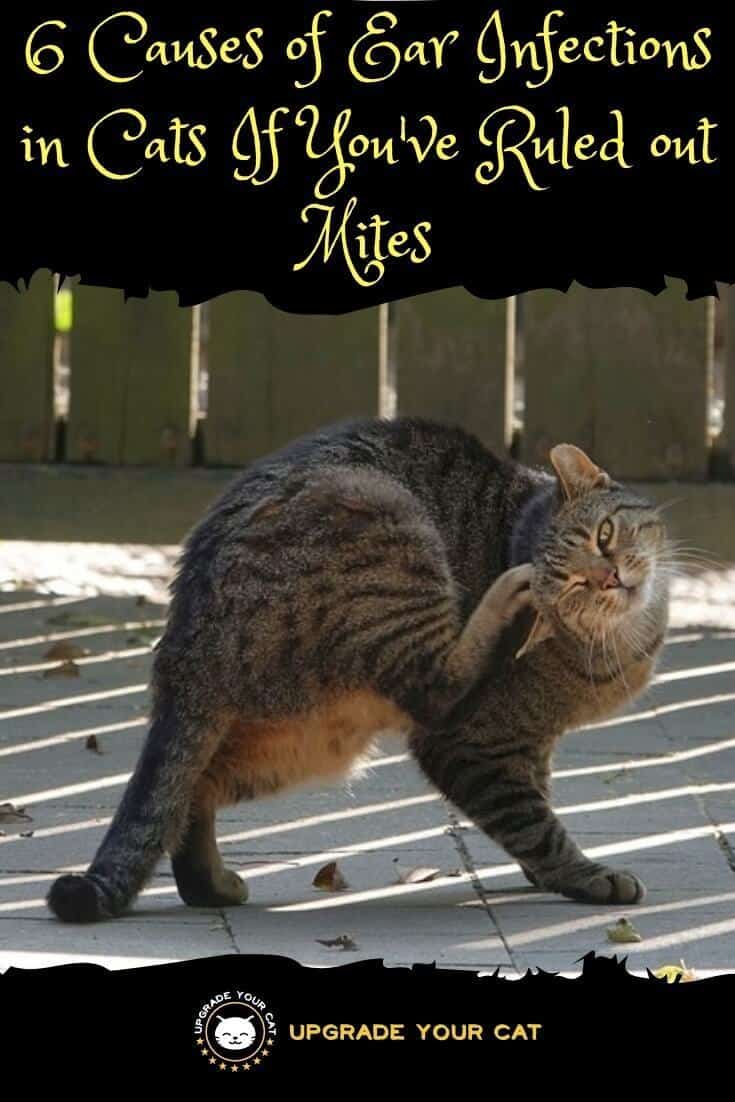 If your cat keeps shaking head but no mites are visible, or you’ve been able to rule out ear mites – there are a few other common causes for this behavior.

If they are shaking their head, it almost certainly means that they have some sort of issue with their ears. This can range from a small scratch they might have picked up in a fight outside, to more serious issues like growths and deep infections.

In this article, I’m looking at 6 of the most common ear-related issues that can cause cats to shake their heads. As well as scratch or paw at their ears, and display signs that they’re bothered or irritated by something.

Why Do Cats Shake Their Heads?

For clarity, the odd shake of the head here and there is perfectly normal. Cats will often shake their head after laying down or doing something active. This is to realign the fluid in their ears which helps them balance.

If your cat is persistently shaking their head, holding their head at a tilt, or scratching at their ears a lot, this is a sign that there’s something bothering them. Ear infections can be very uncomfortable and painful for cats as they have very sensitive ears.

Outer ear infections look similar to mite infections. The symptoms are similar too, your cat will keep shaking their head and scratch at their ears with their back feet.

If you inspect their ears closely however, the main differences you will see are inflammation and reddish swelling. There might even be some discharge. Which, if isn’t visible you’re definitely going to be able to smell as it’s quite foul.

To treat an outer ear infection, your vet will first take a sample to determine if it’s a bacterial or yeast infection. Once they have a better idea of what’s causing the infection, they can clean it up and prescribe the best medicine. You’ll then carry on using the medicine at home until the infection is gone.

Typically an ear infection starts at the outer part of a cat’s ear. From here, the middle and inner of a cat’s ear can become infected if the bacteria has spread. It’s potentially more serious than an outer ear infection as it’s covering a wider area and going deeper into the ear canal.

Some of the symptoms and signs for us to spot still the same, your cat will keep shaking their head and scratching at their ears. Some other signs to look out for are;

Middle and inner ear infections need to be examined by a vet. They may even take an x-ray or do a CT scan. Your vet will then prescribe the appropriate treatment to deal with the severity of the infection.

Polyps, or nasopharyngeal polyps for its full name, is a pinkish color benign growth that develops in the Eustachian tube that’s situated in the middle of your cat’s ear. The cause of these growths is unknown, but they are known to cause or contribute to middle ear infections.

You will see the usual symptoms, such as your cat pawing at their ear and shaking their head. But you’re only going to know your cat has polyps when your vet does a thorough examination inside their ears.

Treatment requires a surgical procedure to remove the growth. It’s not a scary as it sounds, in most cases it’s a relatively quick and routine procedure. Cats typically have some balance issues for a couple of weeks afterward, but they recover quickly.

There has been more than one occasion when one of my cats has visibly had an issue with one of their ears. Only to find under closer inspection that they’ve been scratched or bitten by another cat.

I think almost every outdoor cat has at least one nick in the top of their ear with a bit missing. Cats are territorial animals and they’re going to get into scraps from time to time. Unfortunately, their ears and faces take a lot of the damage.

For small scratches and minor abrasions, cleaning the area and letting it heal – along with their ego from losing the fight – should be all you need to do.

Serious wounds that look like they aren’t going to heal in a few days need to be seen by a vet to reduce the risk of infection.

If your cat is experiencing an allergic reaction to anything, such as their food or something they are coming into contact with at home, it can cause them to itch or shake their heads.

It can be hard to get a definite diagnosis on an allergy being the cause. However, unless they’ve been scratching at their ears a lot, if you take a look inside their ear you’re not going to see some of the other causes I’ve discussed in this article.

In my experience, almost all allergic reactions are caused by cat foods. So, start by trying a specially formulated hypoallergenic cat food. See if this makes any difference if you want to test for allergies causing them to rock, tilt, or shake their head.

Curious cats that like exploring outdoors are very capable of getting some kind of foreign body stuck in one of both of their ears. Bits of grass, twigs, dirt, and even small bugs are some of the common foreign bodies that cats can get lodged in the ears.

If your cat keeps shaking their head and it’s obvious something bothering them, it doesn’t do any harm to get a torch and have a look. Take a good look without actually poking anything in there or upsetting them.

If you can see something that is obviously causing the problem and can pull it out with a pair of tweezers without causing your cat any distress, go ahead. Anything more difficult than that and it’s a trip to the vet.

What Should You Do If Your Cat Keeps Shaking Their Head but Don’t Have Mites?

To summarize the information in this article. If you’ve noticed that your cat keeps shaking their head but you know they don’t have mites, they are likely suffering from one of the following:

Although you may be able to determine it’s one of the above. Unless it’s a simple as removing a little bit of dirt or debris or cleaning up a little battle wound, you’re going to need to seek the advice of your vet. Your cat needs a proper examination so they can prescribe the most appropriate course of treatment.