Can Cats Eat Bell Peppers? (Why & How) 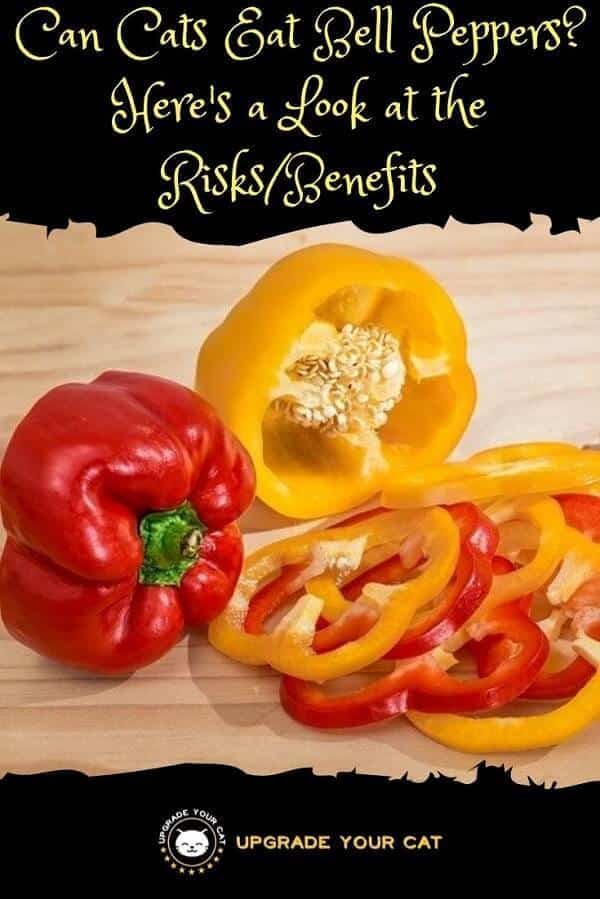 Can cats eat bell peppers? Does it matter if they nibble on a green, yellow, red, or any other color pepper?

Yes, cats can eat peppers. By this, I mean that peppers are not toxic or harmful to cats in any way (in small amounts).

So, if your kitty has had a nibble, it’s nothing to be concerned about. It will come as no surprise, however, that they shouldn’t really be eating peppers.

Cats have sensitive stomachs and complex dietary requirements. They are not going to get any benefit from eating peppers. If they clearly enjoy eating pepper, then, by all means, give them a tiny bit as a treat on a rare occasion.

Any more than that and you’re at risk of creating a pepper-craving monster with an upset tummy!

The ASPCA gives bell peppers the all-clear for cats. This doesn’t mean they’re good for cats through, just that they’re not toxic or poisonous.

With this in mind, you don’t have to lock your peppers away or rush your cat to the vet if they’ve eaten some. But, it’s still not advisable that you feed peppers to your cat.

The reason being that peppers do not provide any of the nutrition cat’s require in their diet. Cat foods have been specially formulated to provide all the nutritional content they need, so you should always be feeding them a well-balanced diet of foods appropriate for their age.

The same principles apply to both raw and cooked peppers. They are not toxic, poisonous, or harmful to cats in any way. However, as with most “human” foods, you should only give your kitty a small amount as a treat.

If your cat clearly enjoys a bit of pepper and keeps bothering you for some, it’s fun to share a bit. Just keep it to a small amount and keep some cat treats nearby to stave off their treat cravings.

Any Difference Between Green, Yellow, Orange, and Red Bell Peppers?

You probably have a preference when it comes to the taste of bell peppers based on their color. I know I do, I love the red peppers the most by far as they are the sweetest.

Green and purple peppers are the most bitter and have a strong “Earthy” or “Grassy” taste. While the orange and yellow ones are much sweeter, with red being the sweetest.

As far as cats are concerned, it’s all the same. You may have heard rumors that cats can’t taste sweet or spicy things. It’s not known exactly what cats taste when they eat things like peppers, but scientists know that they lack the receptors needed to taste sweet things.

This is why it’s more important to identify what’s in the foods we give cats and how this may affect them than the taste. It’s also why cats will often eat things that are surprising to us without being put off by the taste.

Bell pepper plants, which includes the green leaves and stalks are not poisonous to cats. If you have some growing in your garden or greenhouse don’t panic, but it’s still a good idea to protect them from cats.

There is always a chance that a cat will take a liking to a plant and chew it. They can do quite a lot of damage in a short time too. Plus, even though not toxic in any way, a cat will likely vomit if they eat too much plant matter.

When sharing human foods, such as bell peppers, it’s important to watch for allergies or intolerance the first time your cat tries it.

Symptoms of food allergies in cats are typical:

If you spot any of these signs in the hours, even days after your cat trying a bell pepper you know it doesn’t agree with them. Take them off the menu!

Bell peppers are not toxic or harmful to cats, so they are one of the foods that you can give to your cat if you wish.

As with all foods that fall outside of the specially formulated cat foods you should be giving your cat, only give them a little bit. And test a small amount the first time and give it a day or two to check for food allergies too.

Peppers are rich in vitamins, but your feline friend isn’t going to enjoy the same health benefits as we do from eating them. We don’t know why some cats love certain foods, but it’s a treat to them. Nothing more.

Does your cat enjoy bell peppers or any other unusual foods? Feel free to share your experience and stories below, thanks.