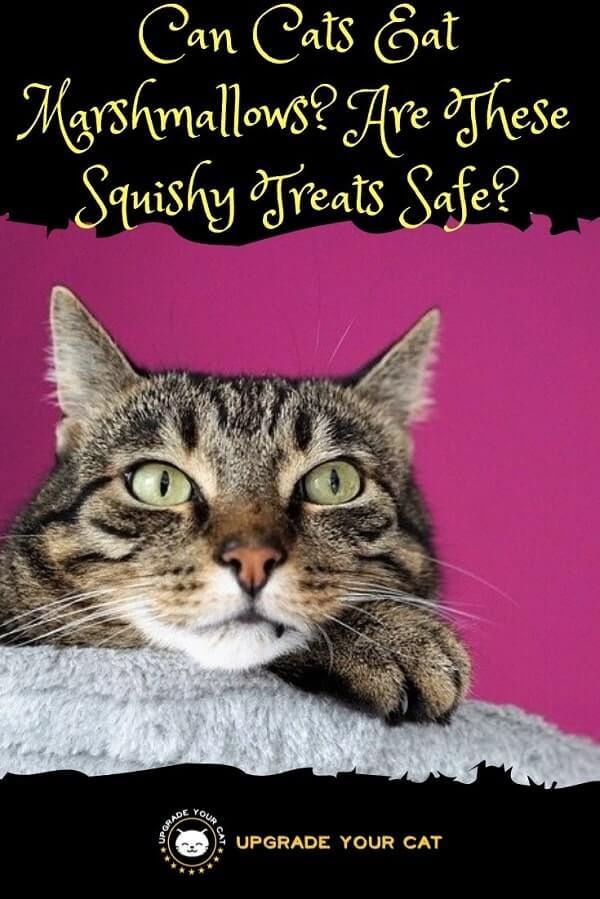 If you love marshmallows, as I do, then you’re right to find out if it’s safe to share them with your feline friend.

Here is everything you need to know about marshmallows, cats, and everything in between.

It’s not likely to do them any harm if they nibble on a little of those squishy mallow treats. They are not poisonous or toxic in any way, so don’t panic. But at the same time, it’s not doing them any good either.

As is the case with most human sweets and treats, marshmallows are full of sugars, additives, and preservatives. They don’t provide any nutritional value to cats, so you shouldn’t be sharing them with your kitty.

Even if your cat is giving you that cute look and rubbing your legs purring away. Don’t do it.

To give you a clearer picture of why cats shouldn’t be eating marshmallows. The four ingredients used to make marshmallows are:

Not exactly a list of the ingredients found in formulated cat foods, is it?

These ingredients are then put through a process of heating, whipping, mixing, and setting into the final form we know as those squishy treats. It’s actually quite an interesting process, I learned something new while researching this piece!

Is There Any Nutritional Benefit for Cats in Marshmallows?

This shouldn’t come as a surprise, but no, there is no nutritional benefit for cats eating marshmallows. There’s none for us either. … but I’m not trying to make anyone feel guilty, this is about cats eating them!

Not only is there no nutritional benefit for cats, but there’s also a load of reasons why they shouldn’t be eating mallows and other sugary treats.

On a more serious note now. There are a couple of reasons why you shouldn’t let your cat have marshmallows.

Marshmallows present a choking hazard to cats, just as they do small children. They have a squishy, foam-like consistency, and aren’t easy to break up with teeth. A cat could easily try and swallow more than they should, and end up getting some stuck in their throat.

Cats are obligate carnivores. In the wild, their diets would consist of prey they catch, which would provide a minimal amount of carbohydrates. And certainly none of the sugars found in sugary treats like marshmallows.

Letting your cat nibble on marshmallows and other similar treats can lead to obesity, diabetes, and other health issues related to their poor diet in the long run.

It’s best to not let them eat any junk food, that way they won’t develop a “sweet tooth” and bother you whenever they see you eating treats.

In Summary – Can Cats Eat Marshmallows?

The good news is that marshmallows are not toxic or dangerous to cats in any way. So, if your cat has been having a nibble on occasion, you don’t need to be too concerned.

It’s a bad habit giving your kitty marshmallows, though. There’s no benefit to cats eating them, and they don’t even get the kind of satisfaction we do as they don’t taste sweet things as we do.

While small amounts won’t hurt your cat, personally I wouldn’t give these kinds of sugary treats to my cats.

If you skimmed the above information and only picked up on the choking hazard that large marshmallow present, you might think mallow fluff is a good idea.

I advise you to go back and read through all the reasons why cats should not eat marshmallows from a health and nutrition standpoint. The ingredients in marshmallows are not good for cats, and that includes the fluffy stuff that comes out of a jar.

You might also think that a mini mallow is a better option as it’s going to be a lot easier for your cat to chew and swallow. The same answer applies, you shouldn’t give you cats any form of marshmallow.

That means mini ones, pink ones, white ones, those mallow twists that are popular, fluff, or anything else. Keep the sweet fluffy stuff for yourself!

If you really want to treat your cat while you’re eating sugary treats to satisfy your sweet stuff, give them a cat treat. That’s their equivalent, and it’s much better for them.