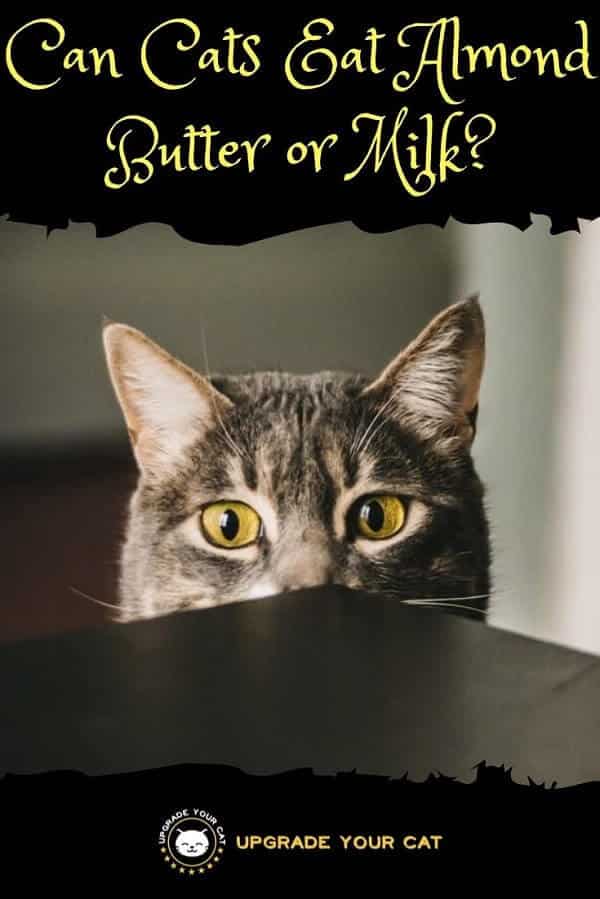 So, you love almond butter? Me too. Can cats eat almond butter as well if you want to share some, or if you’ve caught them helping themselves?

In this article, I will explain everything you need to know about almond butter and cats. As well as dispelling a myth around cats and almonds!

If you’re buying a good quality organic almond butter there shouldn’t be much more than almonds in it.

Typically, there will be a pinch of salt added to enhance the flavor. But you should always go for the “no added flavorings” foods.

I sound like I’m giving you a lesson on how to shop for food, sorry about that! There are also lots of flavored almond butter, like coconut or honey, which adds to the flavor but also adds to the complications for cats.

But, for the most part, you probably just have a jar of crushed almonds.

Are Almonds Toxic to Cats?

This is one of those popular internet myths. I’ve heard people say several times that almonds are toxic to cats. My neighbor even said she knew of an incident when a cat ate some almonds and later died.

I’m not calling anyone a liar, I never do. But I do always check for facts the best I can before repeating what I’ve heard.

What I found out is that according to the ASPCA Sweet almonds, which are the type of almonds commonly sold across the U.S. and used in almond butter are not toxic.

This doesn’t mean they’re good for cats though. Quite the opposite.

Almonds are not a typical food cats would eat in the wild, and it’s nothing something that meets any of their nutritional needs.

They are very likely to cause digestive issues, such as an upset stomach, diarrhea, vomiting, and at best the tummy rumbles.

They actually contain a cyanide compound and are known to be poisonous to most pets. If you’re buying almonds, they should be clearly labeled if they’re bitter as they’re typically bought for specific reasons.

Can Cats Have Almond Milk?

If you were not aware of this, cats are lactose intolerant for the most part and shouldn’t drink milk or consume any dairy products (this includes whipped cream – which cats love).

Almond milk, however, is not a dairy product (despite being called milk), and it doesn’t contain any lactose.

You still shouldn’t be giving it to your cat though. It’s typically made from almonds and water, then has numerous minerals, vitamins, sweeteners, and thickening agents added to it.

It’s a super healthy drink for us, and a great alternative if you’re lactose intolerant. But keep it well away from your cat’s eyes, and tongue!

Some Foods That Are Bad for Cats

So, you now know that almond butter is on the banned list, although it’s not toxic or harmful in small amounts.

Some foods are toxic to cats though, here are a few to avoid:

Dairy – As I touched on above, cats become lactose intolerant as they age and wean off their mother’s milk. Despite seeing cats drinking bowls of milk on TV, it’s not good for them and often causes an upset stomach.

Alcohol – My cats always make their way over to a glass that has alcohol in, but I’m very aware of how toxic alcohol is so they’ve never had a sip.

Onions & Garlic – These vegetables have compounds that cause damage to kitties’ red blood cells. Keep them well apart.

Grapes/Raisins – These innocent-looking fruits are actually pretty deadly to most small animals. Within hours a cat can show ill-effects of eating a raisin, with kidney failure a known long-term effect.

Chocolate – There are compounds in chocolate that are toxic to cats. This is good news for cat owners as we have a reason to keep it to ourselves.

This isn’t an exhaustive list, but I’ve highlighted some of the worst foods that most people have around the home.

If you’re unsure about anything your cat has eaten, or you want to share, always do a quick check to be on the safe side!

Related – Got a sweet-toothed cat? Here’s why they shouldn’t eat caramel or marshmallows.

Don’t panic if your cat has had some almond butter, but don’t deliberately give it to them either.

That’s the main takeaway from this article.

Sweet almonds, the most common type of almond that are used to make almond butter are not toxic or poisonous.

The problem is that it’s not a food that does anything to meet a cat’s complex dietary needs. It’s an occasional treat at best if they really enjoy a little almond butter.